It’s hard to make progress when you have both hands tied behind your back a third of the time. Voters want more secure and better functioning elections, and Congress can act right now to accomplish that. In the swirl of election security concerns, ballot design problems, and vote counting confusion, the Senate should take up the two pending nominees to the United States Election Assistance Commission (EAC) before adjourning this month.

The EAC is the federal government’s main arm for disseminating election administration information to state and local election officials. The Commission sets the guidelines for voting systems and certifies the machines that voters use to cast ballots. Commission staff collect and disseminate vital data about election administration, share best practices, facilitate outreach to language minority voters and those with disabilities, and much more.

These somewhat rosy numbers belie the fact that the good old days of relatively consistent quorums ended back in 2011. Since the start of 2012?a period which includes attempts by foreign adversaries to infiltrate elections, the deterioration of machines purchased back in 2004, and rising distrust in the conduct of elections?the commission has had a quorum just 47 percent of the time. One of the Democratic seats on the Commission has been vacant for 3,566 days. It doesn’t have to be this way. 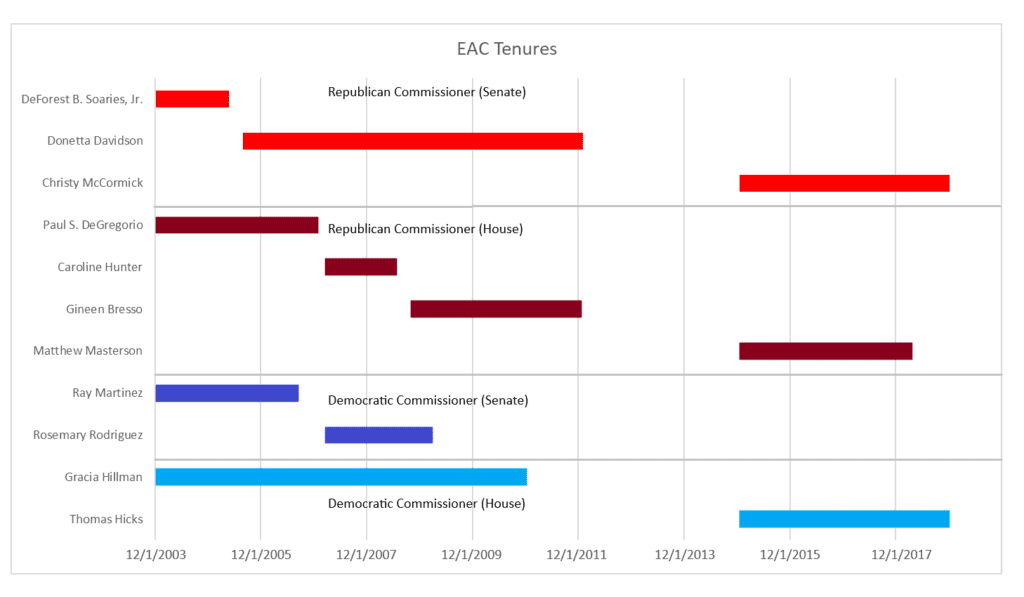 Why do we need a quorum at the EAC? A fully functioning Commission would likely move new voting systems guidelines soon after being reconstituted. These guidelines have not received substantial revisions since 2005. The Commission has been hard at work at a revamped set of guidelines since it regained a quorum in 2014. Those revisions are nearly complete but require commissioners to vote on implementation. Additionally, a quorum would allow the Commission to more effectively lead on election security, voter registration modernization, and expanding access to voting while preserving the integrity of the system.

The Bipartisan Policy Center works on policies that lead to a secure and modern voter registration system, an accessible and fair casting of ballots, and an accurate counting of the vote.

There are two commissioners currently serving at the EAC. Both Chair Thomas Hicks and Vice Chair Christy McCormick were confirmed in 2014. Each is serving on an expired term, which has not been unusual for the EAC over the past 15 years. Both can serve until another nominee is confirmed for their slots.

The Senate Rules and Administration Committee heard from the nominees last week. If the full Senate does not vote to confirm these nominees before adjourning, the process must begin from scratch. That would be an unforced error in the process to improve the voting experience just as we begin preparation for the 2020 election cycle.

Why We Need the Election Assistance Commission