Earlier this week, the Office of Management and Budget (OMB) released The President’s Budget for Fiscal Year 2016. Compared with FY 2014?the last year in which a full-year budget was enacted for the Department of Homeland Security (DHS)?the proposal would increase funding for the five major immigration agencies by about $3 billion, or 12 percent (see Table 1 below). As was the case in fiscal year (FY) 2015, the proposal’s long-term projections include the projected fiscal impact of the Senate’s 2013 immigration bill based on the Congressional Budget Office’s analysis.

The budget contains several provisions that would impact immigration policy and enforcement: 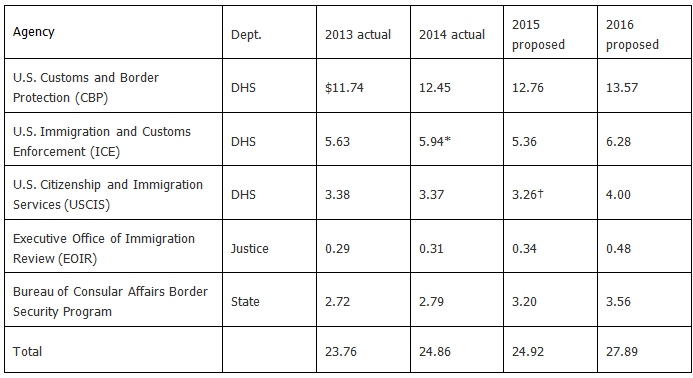 * Includes $334 million in transfer funds to deal with the surge of Central American children and families.
? This figure is contained in the President’s FY 2015 budget; the reference figures for the FY 2015 proposal presented in the FY 2016 document includes $530 million in fees to be collected under President Obama’s November 2014 executive actions on immigration.

3 EOIR is part of the Justice Department. This means that unlike DHS agencies, it already has a full-year appropriation for FY 2015.

President's Budget Not Dead on Arrival

The President’s Budget: Promising Health Care Ideas that Could and Should Go Further