This post is the fourth in a series exploring the labor force impacts of immigration. Read the first, second and third installments of the series.

The debate surrounding immigration and wages is highly contentious. Opponents of immigration are quick to blame foreign-born workers for driving down the wages of native-born Americans, while immigration advocates claim precisely the opposite, and point to other economic factors responsible for wage stagnation.

While economic theory suggests that increasing the supply of workers could drive down wages (at least in the short-run), immigration also increases demand for goods and services, which can lead to economic growth and boost incomes. Furthermore, lower-skilled immigration can free up native-born labor, allowing for specialization and upskilling, which can also lead to wage growth.

So what’s the answer?

There is no doubt that wages are stagnant for many Americans?especially foreign-born workers. However, our previous research suggests that immigration is not a major source of this stagnation. Rather, macroeconomic trends?namely global competition and automation?have put downward wage pressure on lesser-skilled occupations, which disproportionately employ foreign-born workers. Meanwhile, the global economy has been increasingly willing to pay a high premium for talent?as evidenced by the fact that high-skill occupations have seen modest wage gains.

In our previous blog posts in this series, we identified seven industries that disproportionately employ foreign-born workers, and seven industries that disproportionately employ native-born workers. With the exception of computer and math occupations, we found that foreign-born workers tend to be employed in lesser-skilled and lower-wage occupations, like agriculture and construction (see the full list). Conversely, native-born workers are more likely to be employed in higher-skilled jobs, such as management, finance and law (see the full list). 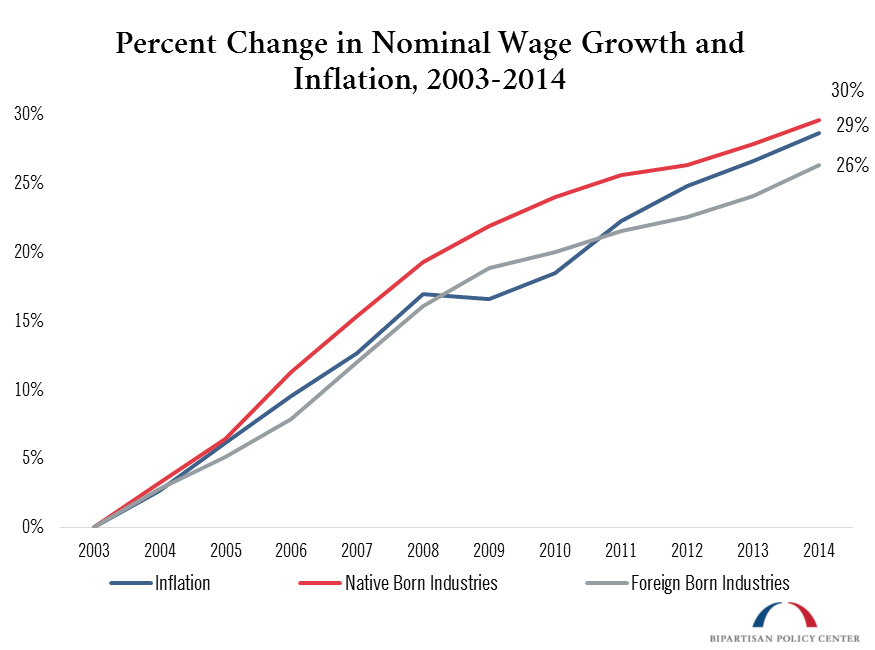 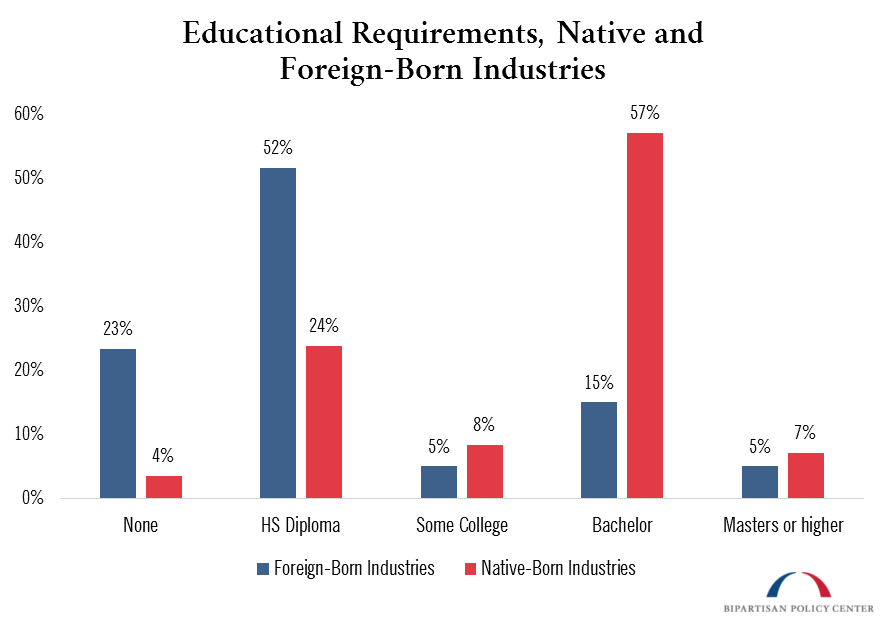 Looking at differences in education is crucial, as over the past several decades the economy has increasingly rewarded those with higher degree attainment via wage growth in higher-skill industries. Indeed, Pew Research analyzed this trend, finding that the “premium” paid to college degree-holders has grown over time. Between 1965 and 2014, for example, earnings among young adults (age 25-32) with at least a bachelor’s degree increased by 17 percent, in inflation-adjusted dollars. Conversely, high school graduate earnings decreased by 11 percent over this period. Given this trend, it makes sense that foreign-born industries have suffered a greater degree of wage stagnation, as a majority of these jobs require lower levels of education.

A more detailed look at the industries themselves illuminates this trend. The below table displays annual inflation-adjusted wage growth as well as educational requirements in the disproportionately foreign-born industries. Only one of the industries?computer and mathematical?enjoyed positive wage growth over this period. It was also the only industry that required workers to hold a bachelor’s degree. 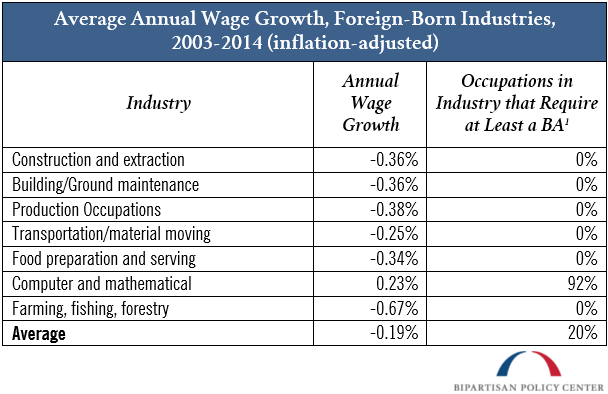 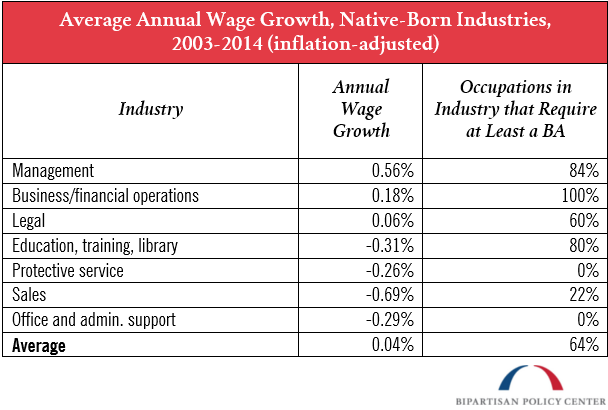 A notable exception to this trend can be seen in the education, training, and library industry. Although 80 percent of these occupations require a college degree, wages decreased by 0.31 percent between 2003 and 2014. This can be largely attributed to declines in state funding, as many teaching and library positions are public-sector jobs. According to the Center for Budget and Policy Priorities, at least 35 states have not restored pre-recession funding levels to their public education systems.

Although foreign-born industries have suffered greater wage stagnation than their native-born counterparts, this has been largely due to the lower-skill nature of many of these jobs?and not due to immigration itself. The global economy places a high premium on degree attainment, and while it is possible that immigration may affect wages at the margin, the disparity between native-born and foreign-born industry wage growth is mostly a reflection of larger macroeconomic trends.