This post is the third in a series exploring the labor force impacts of immigration. Read the first and second installments of the series.

Immigration does not limit the job opportunities of the native-born population. As reported in our previous blog post, native and foreign-born workers tend to work in different industries that require separate skillsets. In general, foreign-born individuals are more likely to work in lower-paid, lesser-skilled positions that require lower levels of written and oral language proficiency.

The table below displays the seven industries that collectively employ around half of foreign-born workers?but just over a quarter of native-born workers. 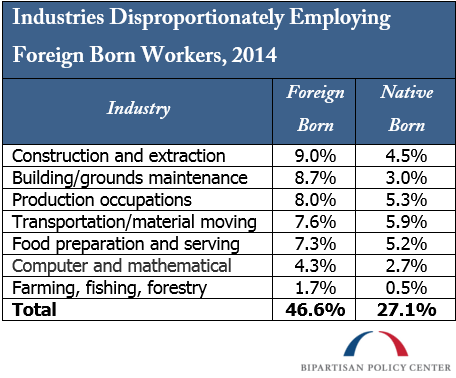 And the below table displays the seven industries that employ over half of native-born workers, but just over 30 percent of foreign-born workers. Our research indicates that these trends have remained relatively constant throughout the past decade. 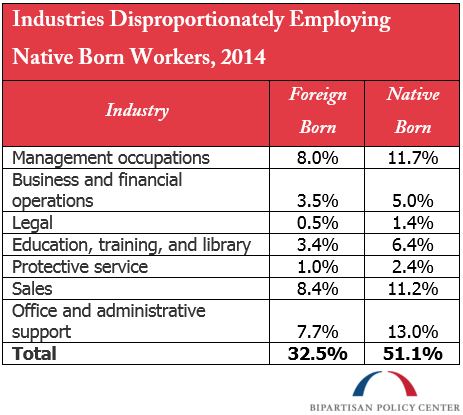 As a whole, both the disproportionately foreign and native-born industries have seen similar gains in employment since 2003?at around 0.4 percent annual growth. However, job creation has varied greatly by industry, with each uniquely affected by the Great Recession. 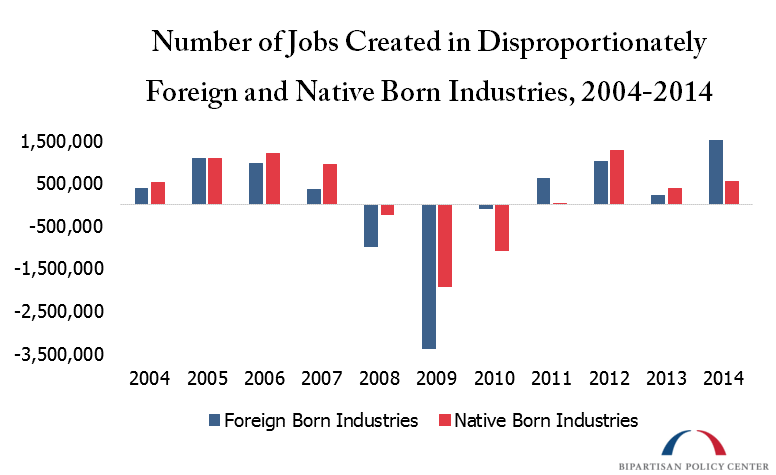 There are several explanations for these trends. The steep job losses in foreign-born industries during the Great Recession can be largely attributed to the housing crash, which rocked the construction industry. Between 2008 and 2010, employment in construction and extraction declined by 8.8 percent per year, compared to a 4 percent average annual decline for the foreign-born industries as a whole. Furthermore, textbook economics indicates that lower-skilled jobs are both easier to fill and to shed in down times, due to lower hiring and training costs. This also helps to explain the steeper employment declines during the Great Recession in the foreign-born industries, as they tend to be composed of lesser-skilled occupations.

The stronger post-recession job growth in the foreign-born industries can also be viewed through the lens of broader macroeconomic trends. Over the past several years, beginning even before the recession, the economy has seen a “hollowing out” of middle-skill jobs, with strong job growth in both lesser-skilled and highly-skilled occupations?but weak growth in middle-skill positions. This has been due to a number of factors. Globalization has meant many manufacturing jobs have moved overseas while at the same time placing a premium on highly-skilled talent at home. Technology also has eliminated many previously existing routine, but relatively well-paid, positions?such as clerks and secretaries. This decline in middle-skill jobs has occurred in both the native and foreign-born prevalent industries. It has been most notable in production occupations (which includes manufacturing), in which employment declined by 1.3 percent per year between 2003 and 2014, as well as office and administrative support positions?in which employment shrunk by 0.9 percent annually over this period.

However, the disproportionately foreign-born industries have enjoyed stronger employment growth over the past few years. Not only has the construction industry rebounded, but many of these industries rely on positions that are both lesser-skilled and non-tradable, meaning that they cannot be done overseas. For example, employment in transportation and material moving?in which just 9 percent of occupations require a bachelor’s degree?grew by 2.9 percent between 2011 and 2014. Similarly, food preparation and serving?in which there are generally few educational requirements?enjoyed 1.5 percent annual job growth.

Conversely, the disproportionately native-born industries include several middle-skill occupations?such as those in sales and office/administrative support. These industries saw annual job growth of just 0.8 percent and 0.1 percent between 2011 and 2014, respectively.

The charts below break down average annual job growth in all of the various foreign and native-born industries: 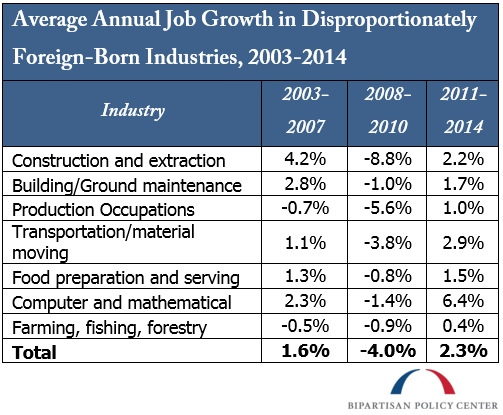 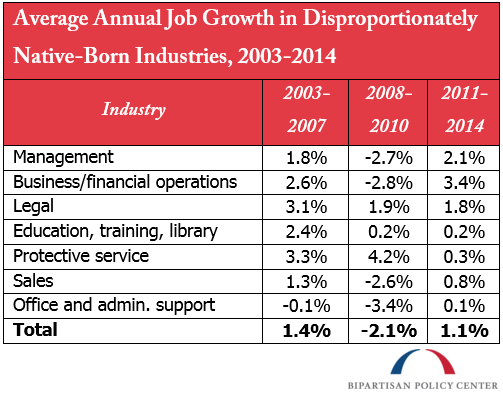 Absent immigration, it is unlikely that the workforce would be sufficient to support the growing demand for labor in the above lesser-skilled industries. Indeed, labor shortfalls are currently plaguing the construction industry due to declining immigration. And the fact that post-recession employment has increased so rapidly in many of the foreign-born industries gives credence to the notion that immigration plays a vital role in plugging labor gaps. As we noted in our previous blog, native-born Americans have many options besides taking a job in a lesser-skilled industry. Many return to school, retire early, or enter disability. This means that without immigration, many of these lesser-skilled positions would likely go unfilled or disappear, which would hurt productivity and put a damper on economic growth.