Immigration continues to be a top election issue, with most recent attention focused on the question of whether or not immigrants displace native-born Americans out of jobs.

According to the U.S. Small Business Administration, immigrants are more likely to be business owners, and immigrant-owned firms are more likely to hire employees. Lesser-skilled immigration can be a complementary force for higher-skill native-born workers, allowing them to specialize and upskill. And high-skilled immigration can be a boon to innovation, which can increase native-born employment and wages.

Immigrants can also work to fill labor shortages. As we wrote in our previous blog in this series, native-born workers are more likely than immigrants to exit the labor market in favor of retirement, school enrollment, or to collect disability insurance. Furthermore, according to a study in American Behavioral Scientist, the past few decades have seen declining birthrates and increased degree attainment among the native-born population. This has led to a shortage of lesser-skilled labor, which immigration has helped to fill.

Ultimately, there is overwhelming evidence that immigration plugs labor shortages, spurs job creation, and does not displace native-born jobs.

Employment Characteristics of Native and Foreign-Born

It should first be noted that a high percentage of native and foreign-born individuals do in fact work the same types of jobs. Around 75 percent of U.S. employment is driven by 10 industries, eight of which employ a high percentage of both native and foreign-born workers. According to the Bureau of Labor Statistics, “construction and extraction” is the most popular industry for immigrant workers, employing 9 percent, followed by “building, grounds cleaning and maintenance,” at 8.7 percent. For native-born workers, “office and administrative support” is the most popular industry, employing 13 percent of workers, followed by “management.” The third-most popular industry for both demographics is “sales,” which employs 8.4 percent of foreign-born and 11.2 percent of native-born workers. 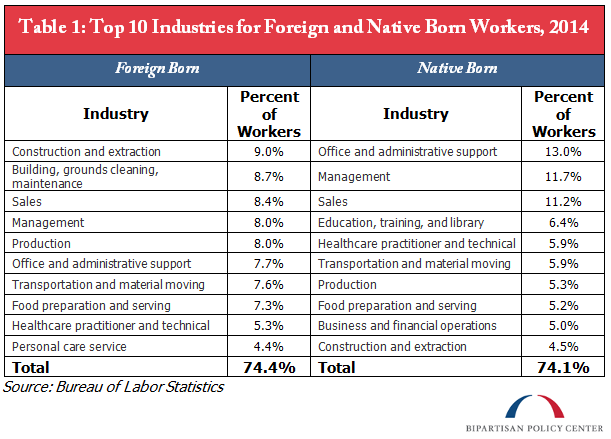 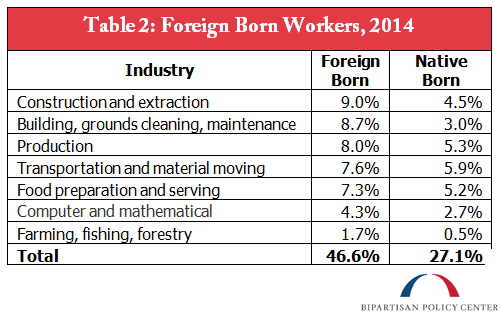 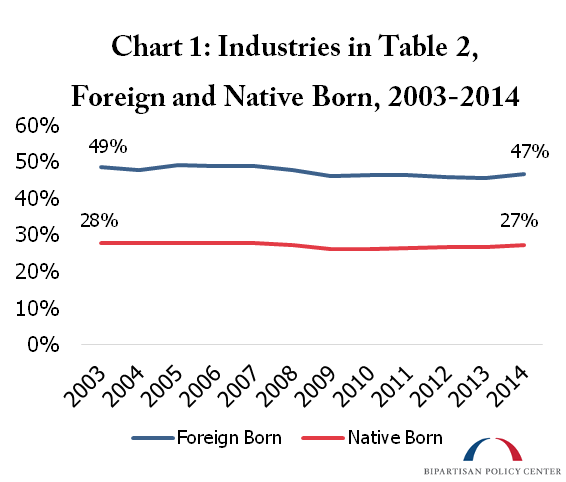 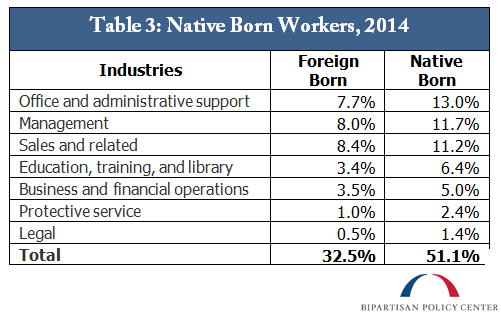 In general, the disproportionately foreign-born industries require a lower level of English language proficiency than their native-born counterparts. This is unsurprising, given the fact that a majority of immigrants do not speak English as their primary language.

The Occupational Information Network (O*Net) is a database that looks at the skills demanded by hundreds of occupations, and rates them on a scale of importance from zero to 100. A zero means that the given skill is not important for that occupation, and a 100 means that it is vital. Table 4 uses O*Net to look at the average importance of written and spoken language skills in the disproportionately foreign and native-born industries, namely “oral and written comprehension” (the ability to understand spoken and written language), and “oral and written expression” (the ability to communicate through spoken language and writing). As indicated by the table, these four skills are far more important for the predominantly native-born industries, which score an average of around 20 points higher than the foreign-born industries. This is particularly true for “written expression,” which scores a 68 for native-born, versus a 43 for foreign-born.

According to table 5, the disproportionately foreign-born industries pay an average annual salary of around $35,000, and just 19 percent of the 81 occupations within these industries require at least a Bachelor’s degree. When excluding computer and mathematical occupations?the lone high-skill industry in table 5?none require a bachelor’s degree, and the average annual salary drops to around $25,000. 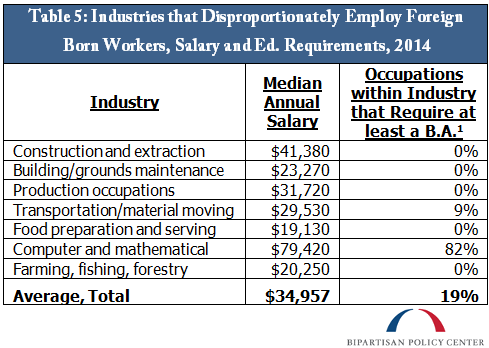 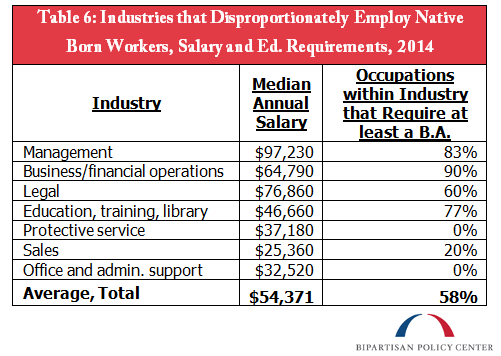 In short, the research and data clearly demonstrate that immigration is a net positive for jobs and the economy, as it spurs innovation and fills shortages in predominantly lower-wage, lesser-skill occupations. With this issue continuing to dominate the 2016 election cycle, it is important to separate facts from rhetoric. Immigration does not displace native-born jobs?it supports them.