Contrary to earlier U.S. intelligence assessments, the International Atomic Energy Agency (IAEA) has found that Iran pursued elements of a nuclear weapon as recently as 2009. Despite this headline, the substance of the IAEA’s recently released report on the so-called possible military dimension (PMD) of Iran’s nuclear program is itself unremarkable. It contains little information that the IAEA had not already revealed four years ago, when it began an intensified effort to understand the full scope of Iran’s nuclear activities.

The state of our knowledge about Iran’s nuclear program has been advanced little if at all by this report. What is remarkable about the report is how little substantive cooperation from Iran the IAEA received in preparing it, despite requirements in this summer’s Joint Comprehensive Plan of Action (JCPOA) that Iran answer international inspectors’ outstanding questions and concerns.

Ultimately, by highlighting that Iran has continued its years-long pattern of resisting an honest accounting of PMD concerns, this report reveals much more about how Iran regards the nuclear deal than it does about Iran’s nuclear program. Leaders in Tehran seem to believe that the appearance of compliance with the JCPOA is much more important than actually complying. This sets a worrying tone as the nuclear deal moves toward implementation.

A nuclear weapon consists of three elements: 1) the fissile material?either highly enriched uranium or plutonium?required to sustain a nuclear chain reaction; 2) a mechanism to trigger that reaction in the fissile material; and 3) fitting the combination of weapon and fissile material, known as a nuclear “device,” to a delivery mechanism, such as a ballistic missile, to get the device to its target. The combination of the first and second of these elements is known as the nuclear “device” while just the second element alone is referred to as the “weapon,” therefore, in the usage of the nonproliferation community, a “weapons” program or attempts at “weaponization” refer solely to efforts at acquiring the technology needed for the second of these steps, not the entirety of a program aimed at constructing a nuclear device.

The technology needed to pursue the first of these is the same, for the most part, as that of a peaceful nuclear energy program. It is the most technically difficult element to master, but also the easiest to detect. As a result, building enrichment facilities or designing nuclear reactors that produce plutonium?both of which we know Iran has done?is not in and of itself an indicator of intent to acquire a nuclear device. Conversely, in the presence of an enrichment program, because it can yield an essential element of a nuclear device, the lack of a weaponization program cannot suffice to indicate the complete absence of intent to acquire a nuclear device.

However, the latter two elements?weapon and delivery mechanism?have no justification outside of a military program. The IAEA has the United Nations mandate of verifying the peaceful nature of nuclear programs in countries like Iran that have signed the Nuclear Nonproliferation Treaty. In addition to monitoring Iran’s enrichment program and nuclear reactor construction, the IAEA has been seeking to determine whether Iran has engaged in any research into the military dimensions of nuclear technology and, if so, when and where these took place and how far they advanced.

In a controversial 2007 National Intelligence Estimate, the U.S. intelligence community declared: “We judge with high confidence that in fall 2003, Tehran halted its nuclear weapons program.” Yet, that same year, the IAEA began attempting to get answers from Iran on a series of “outstanding issues,” among them allegations that Iran had engaged in studies related to developing a nuclear weapon.

This process led nowhere and in 2011, frustrated, the IAEA released a public report describing the credible information it had that Iran had engaged in work in twelve different areas that appear to have little justification beyond researching how to build a nuclear weapon. Ascertaining just what Iran in fact did in each of those twelve areas and why has become, for the last for years, a major undertaking for the IAEA often referred to as the outstanding issues on PMD.

In 2013, as the United States and other world powers were beginning negotiations with Iran that would eventually lead to the JCPOA, the IAEA began a separate process to once again resolve outstanding areas of concern with Iran, including PMD. Iran and the IAEA went through several rounds, with a total of 17 issues raised for clarification. While Iran addressed 14 issues unrelated to PMD to the IAEA’s satisfaction, it failed to address two PMD-related issues and failed to provide full clarification on another. This continued Iran’s pattern, dating back at least eight years, of stonewalling efforts to uncover the full extent of its past weaponization research.

PMD and the JCPOA

Coming clean about PMD issues had long been considered one of the prerequisites for any nuclear deal with Iran. During JCPOA negotiations, Secretary of State John Kerry personally stressed the importance of resolving PMDs, saying in an interview, “It will be part of a final agreement. It has to be.” But, much as PMD was moved onto a separate IAEA-led track during the negotiations leading up to the JCPOA, the final deal similarly created a parallel framework for addressing PMD rather than making Iranian compliance a strict condition of the agreement itself. As a result, the exact status of PMD and the obligations Iran accepted as part of the JCPOA have been murky at best.

Iran will fully implement the “Roadmap for Clarification of Past and Present Outstanding Issues” agreed with the IAEA, containing arrangements to address past and present issues of concern relating to its nuclear programme as raised in the annex to the IAEA report of 8 November 2011.

The Roadmap itself creates a process and timeline for Iran to submit answers to IAEA’s outstanding PMD questions, for the IAEA to ask for further clarification of any remaining ambiguities, and finally for the IAEA to provide a “final assessment on the resolution of all past and present outstanding issues.” That is the report the IAEA just released.

In its “Final Assessment on Past and Present Outstanding Issues regarding Iran’s Nuclear Programme,” the IAEA essentially admits that it has not significantly furthered its understanding of Iran’s military nuclear activities since 2011, despite the JCPOA’s provisions for Iranian cooperation on the PMD issue. The report finds, contrary to the 2007 NIE, that Iran likely did pursue weaponization research beyond 2003, although these efforts appear to have been conducted piecemeal rather than in a comprehensive manner. These conclusions appear to be almost entirely drawn from intelligence gathered by IAEA member states. Although Iran appears to have provided some information as part of the Roadmap process to suggest that these activities had non-nuclear industrial and military purposes, the IAEA largely dismisses these excuses as unconvincing. Tellingly, in at least one instance, Iran?told by the IAEA that its explanations were “inconsistent”?submitted a second set of data that was similarly unsatisfactory.

Specifically, on each of the 12 PMD issues previously raised by the IAEA, the December 2015 report provides the following information about the level of Iranian cooperation in resolving the issue and the IAEA’s conclusion about the actual scope of Iranian activities in that area: 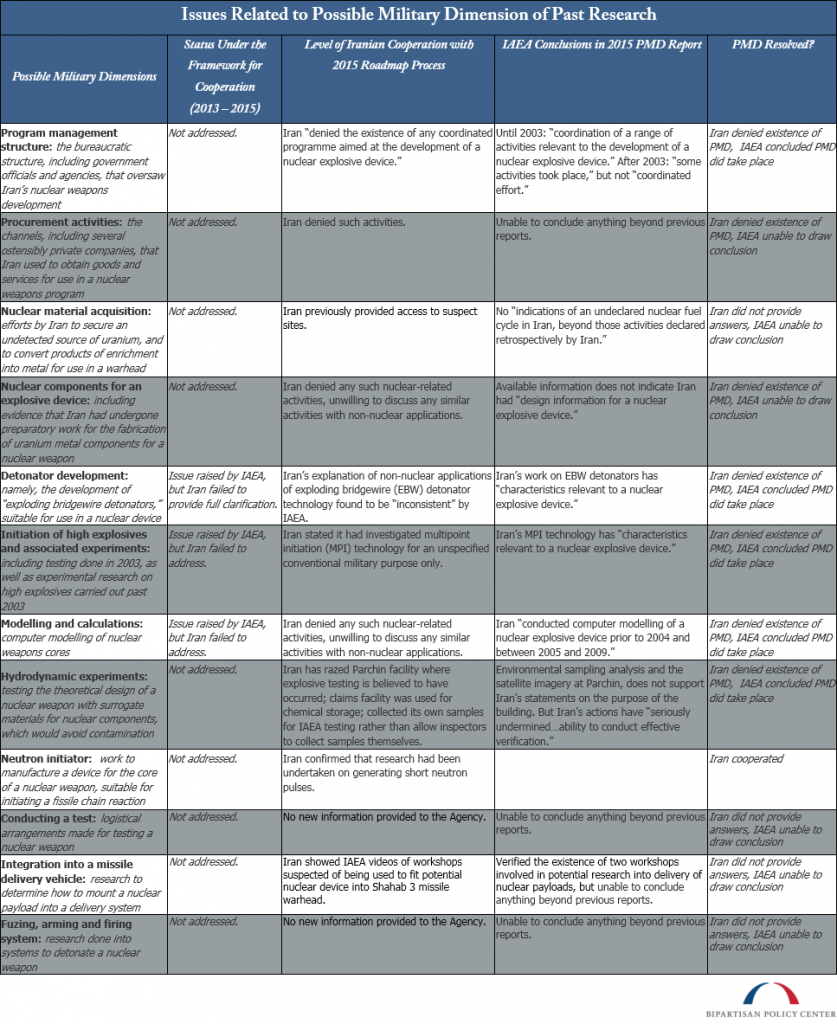 View a larger version of the chart

Rather than a clear-cut indication that Iran either had pursued weaponization or had innocent explanations for all of its suspect activity, the IAEA’s report largely leaves the PMD issue unresolved. There is enough information to suggest that Iran was engaged in military nuclear activities, but continued Iranian obfuscation prevents any definitive conclusions. But how does this inconclusiveness impact attempts to implement JCPOA?

It does not seem to have any formal impact. The text of the JCPOA and the Roadmap only describe a dialogue between Iran and the IAEA rather than a requirement for a full and accurate accounting of Iran’s past nuclear weapons research. Nor do they impose consequences for failing to provide such an accounting. But there is no requirement on Iran beyond providing some answers to the IAEA; the quality of those answers or the IAEA’s satisfaction with them is not a condition of the deal. By Iran providing some sort of answers to the IAEA and by the IAEA publishing this final report, all formal conditions of the JCPOA related to PMD appear to have been fulfilled, clearing the way for Implementation Day later in 2016.

And yet, if this report is the final word on PMD, it is likely to have a significant impact on the way in which the JCPOA is implemented and the future of nonproliferation.

Most importantly, Iran’s decision to continue providing the IAEA with unsatisfactory and “inconsistent” information as part of the JCPOA-mandated PMD Roadmap suggests a calculated gamble that the P5+1 countries are more interested in the process of the JCPOA, than in its substance. Iran’s leaders have chosen to follow the letter of the deal (answer the questions), but not its spirit (reveal and constrain nuclear proliferation activities). Doing so runs a certain risk?that the United State or other parties to the deal would call out Iranian actions as insufficient to meet the deal’s requirements and declare Iran is not entitled to sanctions relief until it fulfills its obligations?a risk that Iran apparently decided was minimal enough as to be worth incurring. And if Iran believes that there is only a small chance that its PMD stonewalling would disrupt the deal it is not because that stonewalling would go unnoticed, it knew that the IAEA would issue a final report, after all. Iran must have come to the conclusion that the outcome of the PMD process did not actually matter to the P5+1, that it was a procedural hoop to jump through and a box to check rather than a substantive test of Iranian honesty or cooperativeness that had to be passed.

If Iran is proven right in this conclusion, if the inconclusive IAEA report on PMD ends up having no bearing on the progress toward Implementation Day, then Iran will draw a much more dangerous inference: that the appearance of compliance is much more important than actually complying. Having already established a pattern of pushing boundaries, seeking out loopholes, and outright cheating on its international legal nonproliferation obligations, this lesson could motivate Iran to continue such behavior under the JCPOA.

Further, the inconclusiveness of the PMD report will deprive the international community from acquiring the information it needs to design a full and robust monitoring regime that could catch such cheating going forward. Without knowing the full scope of Iran’s nuclear program?which scientists, under orders of which government officials, conducted what activities where?the international inspectors that have been given unprecedented, but not unlimited, access to Iran’s nuclear sites will be hamstrung in their ability to ensure no illicit activities are taking place during JCPOA’s term.

Finally, beyond the JCPOA-mandated Roadmap process, full Iranian cooperation on PMD has been a legally binding requirement on Iran under multiple UNSC resolutions. If Iran is declared to have fulfilled this obligation without actually having provided a full and honest accounting, it will show not just Tehran but future potential proliferators that the NPT, U.N. Security Council, and IAEA need not be taken seriously.

Funding Inspections Under the Iran Deal