While traditional definitions of infrastructure often leave out housing, the two are undeniably connected. The existing supply and utility of affordable housing is directly dependent on the condition of other infrastructure assets. For example, access to high-speed broadband, safe and affordable water services, and transportation options are all vital to the livability of affordable housing. Transit projects, in particular, can directly connect people with economic opportunities by incorporating nearby housing options, often referred to as transit-oriented development.

This connection was recently highlighted in Des Moines, IA, where local news reported on Bhutanese refugees who would walk for miles along the shoulder of a highway to reach the nearest grocery store. An affordable housing shortage and lack of transportation options left these residents in a food desert. To address this issue, the city deployed a shuttle to run to and from the refugees’ apartment buildings for the next 12 months or until a long-term solution is found. Though this story resulted in a patchwork solution, it underscores that a disconnect between affordable housing and other adequate infrastructure services disproportionately impacts low-income and disadvantaged populations. 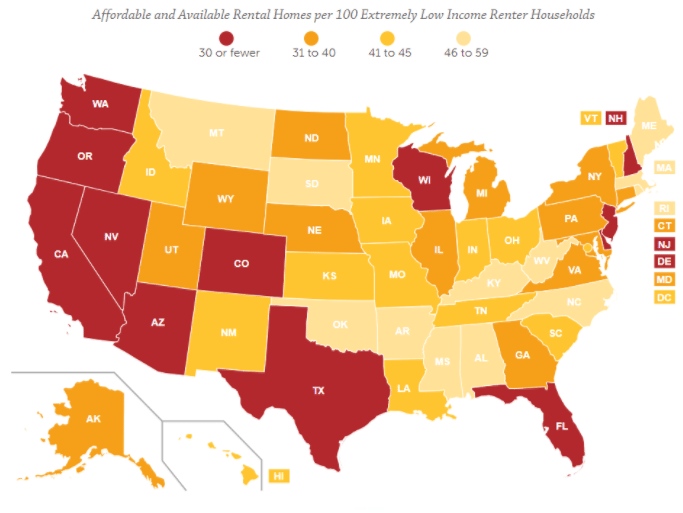 Within the trillion-dollar, funding-focused infrastructure plan released by Senate Democrats, $62 billion was proposed for what it calls Neighborhood Revitalization, Lead Remediation, and Affordable Housing. Within that bucket of funding, the plan carves out seven programs or areas that would receive money:

Unfortunately, the proposal does not provide a breakdown of how the $62 billion would be divided among these seven program areas, which obscures any attempt to analyze the potential impacts of the proposal. The plan also does not specify if funding would be distributed over several years, or in a single year. The recently passed omnibus funding package, with an extra $21 billion directed towards infrastructure for 2018, further muddies the water, as LIHTC, CDBG, and HUD’s HOME Investment Partnership program all received a boost.

Yet, broadly speaking, the Senate Democrats’ plan considers affordable housing as an integral piece of a community’s infrastructure, proposing new investments in housing development and repair alongside transportation, water, and other infrastructure priorities. At 2017 funding levels, the programs listed above received roughly $46 billion in combined funding, and will now receive $49 billion for 2018. Depending on how the $62 billion would be allocated or could change given the new 2018 funding levels, it would represent a funding increase of up to 135 percent. Any expansion in funding to these programs would, to some degree, help preserve or produce additional affordable housing options.

In the White House’s infrastructure plan, a significant emphasis has been placed on local and state investments. While the plan is not designed to address affordable housing issues in fact the word “housing” made only a single appearance in the 55-page outline it would still directly impact the supply of affordable rental homes in the United States.

Transit hubs, like a new metro stop or train line, often act as an economic stimulant for the surrounding neighborhood. Home values can increase and new businesses might be attracted to the area. Capturing this increase in value can help to finance the construction, maintenance, and operating costs of the associated transit system. With an emphasis on value capture, transit systems may focus more on transit-oriented development, which may include housing, in order to maximize the potential returns. However, as the property values in the area increase, the capacity to build affordable housing typically decreases. At present, the White House plan lacks sufficient detail to know all its pros and cons. Yet requiring projects to use value capture in order to receive federal funds could create a disincentive for the project sponsor to utilize transit-oriented development for affordable housing, or to connect a transit system to a less affluent neighborhood.

However, transit systems are more sustainable when they are tied to a long-term revenue source and denser development around stations which the White House plan would encourage. If this plan moves forward, finding opportunities to also spur affordable housing around transit investments should be a goal. Currently, the Trump proposal only requires that value capture financing be used, which could lead to more transit-oriented development, but the plan does not specify how affordable housing should factor in.

The president’s infrastructure proposal includes increasing the usage of Private Activity Bonds (PABs). Expanding PABs will be critical in leveraging the president’s goal of $1.5 trillion in new infrastructure investment. While $6.6 billion in PABs have been issued to fund traditional infrastructure projects, the largest shares of PABs are issued to finance single-family and multifamily housing projects. In 2016, of the $20.38 billion PABs issued, $18.47 billion, or 91 percent, were in single-family and multifamily housing. PABs are also used to directly generate 4 percent LIHTCs, which account for 50 percent of affordable rental housing projects. At current levels, PABs are expected to fund an estimated 700,000 affordable housing units over the next decade. On the “traditional” infrastructure side of PAB projects, the proposal lifts the state volume caps, lifts the $15 billion cap on infrastructure projects, and expands the list of eligible infrastructure projects. The proposal would also remove the alternative minimum tax that is applied to the earnings on PABs. In theory, removing this tax will result in lower interest rates for PAB-funded projects. Depending on how each these changes are applied to the various PAB categories, these changes could also result in lower financing costs for affordable housing projects.

The federal government owns 263,000 buildings, or 2.5 billion square feet of property across the country. In 2015, federal agencies reported an estimated 7,000 unused or underused buildings. When the federal government evaluates one of these properties, the current process includes screening the property for 12 public benefits, including the potential use of the property by other federal agencies, homeless providers, and state and local governments. Under these public benefit provisions, the property can be sold at up to a 100 percent discount. Since 1987, the federal property disposal process has been prioritized for homeless providers through the Federal Surplus Property (Title V) Program. Under Title V, the excess properties are screened for suitability for providing homeless services. According to CityLab, the Title V process has created roughly 500 emergency shelters, transitional housing facilities, nonprofit offices, and other spaces through the transfer of 900 acres of federal land, spread across 30 states and the District of Columbia.

Notably, the White House’s proposed budget was released on the same day as the infrastructure plan. Though any president’s budget is largely a political document, it sets a narrative marker for the administration’s policy preferences. While the White House’s proposed infrastructure plan interacted indirectly with several affordable housing mechanisms, its proposed budget would cut resources from several vital affordable housing programs. The proposed budget cuts included the $3 billion Community Development Block Grant program, the $1.9 billion Capital Fund for improvements to public housing, $1.7 billion from the public housing operating fund, and the $950 million HOME Investment Partnerships program. Some of these funding cuts were carried over or adapted from the White House’s 2017 proposed budget, and both have largely been ignored by Congress. As with these budget proposals, the Trump infrastructure plan could be substantially changed before it is introduced by congressional Republicans.

What’s In the Trump Infrastructure Plan – and What’s Not

Michele Nellenbach: Cutting Ribbons Won’t Do Anything for Infrastructure