The third in a series of posts on the Budget Control Act.

Now that the Budget Control Act (BCA) has been signed into law, the focus shifts to the Joint Select Committee on Deficit Reduction (JSC) tasked with finding $1.5 trillion in spending cuts and/or revenue increases over the next ten years (These savings would come on top of the roughly $900 billion saved up-front from capping discretionary spending; for details, see our earlier post). But what happens if they fail to come to an agreement? That’s what the “sequester” is for. It will act as a “sword of Damocles” hanging over the JSC in the hopes of forcing action.

Each party would face cuts to spending categories that it generally tries to protect ? the hope being that both parties will have sufficient incentive to move towards the middle and strike a deal. Motivating Democrats are potential cuts to domestic discretionary programs, the Affordable Care Act’s (ACA) cost-sharing (exchange) subsidies, Medicare, and a couple other mandatory spending programs. On the Republican side, defense spending would be cut by a hefty 10 percent. If the JSC cannot agree to at least $1.2 trillion in deficit reduction (or the package fails to be enacted into law), these automatic sequester cuts would take effect to roughly bring the budget savings up to $1.2 trillion through 2021.

The sequester would be implemented beginning in 2013 as an across-the-board cut to all non-exempt budget accounts. (The cut to most of the Medicare program is capped at 2 percent.) Like most previous sequesters, however, this one is riddled with exemptions. Social Security, veterans’ benefits, Medicaid, the Children’s Health Insurance Program (CHIP), unemployment insurance, Temporary Assistance for Needy Families (TANF), food stamps (SNAP), and a host of other programs (mostly those benefitting individuals with low incomes) are all exempt from sequester ? see the Statutory Pay-As-You-Go Act of 2010, starting on page 22, for a list of most of the exempt programs. Revenues, which many Democrats were arguing to be included in the sequester, are also exempted. But, as detailed above, important priorities of both parties are still laid on the chopping block.

Now for the fun details ? if numbers aren’t your thing, you should probably stop reading:

1. If the JCS fails to report or its recommendations are not enacted, then the Office of Management and Budget (OMB) is required to cut (by means of a sequester) $1.2 trillion from the budget during the years 2013-2021.

2. To account for the fact that part of this $1.2 trillion will come in the form of interest savings, the BCA instructs the OMB to reduce the size of the sequester by 18 percent, to $984 billion.

3. The dollar amount of the cuts must be evenly divided in each of the nine years, meaning an annual cut from the baseline of $109 billion.

4. The cut is split evenly between the non-exempt portions of defense (function 050) and non-defense spending, requiring approximately a $55 billion annual cut to each. Aside from exempt programs (of which there are many ? see above), these cuts are spread among both mandatory and discretionary spending. 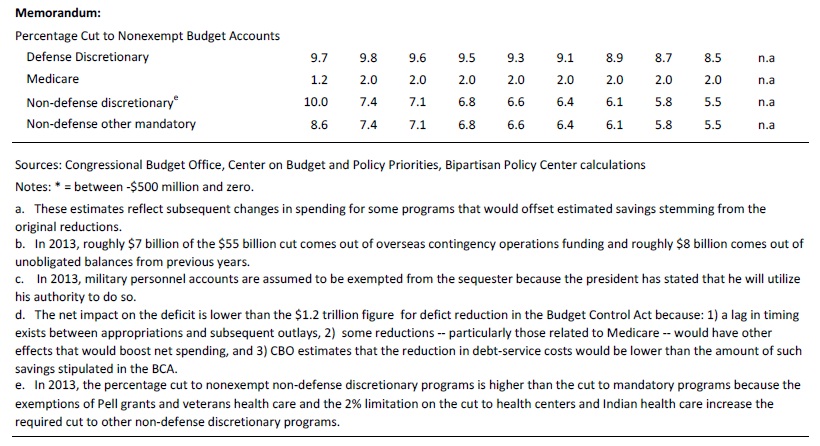