After last summer’s surge of Central American child migrants, many were processed and issued notices to appear in immigration court to determine whether they should be sent home. Some argue that these migrants need to be detained while awaiting their court cases, both to ensure they appear for their hearings and to deter others from coming. Others contend that detention is not necessary or that attendance in court can be ensured by less restrictive alternatives to detention.

This debate has made the frequency with which migrants appear in immigration court an important point of interest for policymakers and the public. In particular, many stakeholders want to know how many of last summer’s child migrants are showing up for court. When an immigrant does not appear for their scheduled court hearing, the case may be decided “in absentia,” which means the immigration judge can enter an order in the absence of the defendant. The percentage of cases decided in absentia is the best available measure of migrants’ court attendance. In more than 99 percent of child cases decided in absentia since FY 2005, the immigrant was ordered removed.

Most recent cases are still pending 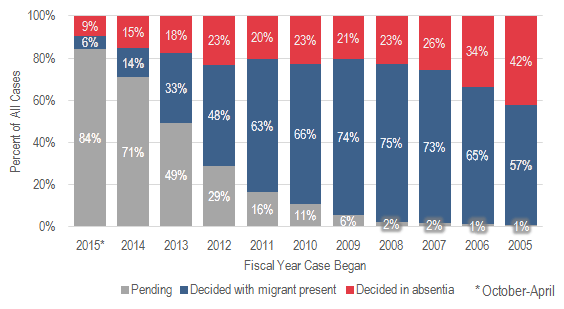 Some stakeholders have divided the number of absentia rulings by the total number of cases filed and argued that more than 80 percent of children have attended their court date. This deduction is erroneous because it counts pending cases as though the migrant attended their court date. Although it is possible that child migrants will have perfect attendance in pending cases, it is more reasonable to assume that some pending cases will eventually be decided in absentia.

Because less than one-third of the cases that began in FY 2014 have actually been decided, it is unclear how many will ultimately fail to appear in court. Cases that are resolved quickly are unlikely to be representative of cases that take longer. In almost any situation where the migrant does not attend their court date, the case can immediately be decided in absentia. By comparison, if the migrant attends, the case may or may not be decided immediately?in some cases, a follow-up hearing must be scheduled. As a result, the number of pending cases includes an unknown number of cases in which the child attended the initial court date but had a follow-up hearing scheduled. Thus, while it is correct to say the child did not attend their hearing for the majority of cases that have been decided, it is unclear how many additional children attended their hearing but did not have their case resolved.

In light of the uncertainty surrounding pending cases, it may be more informative to examine cases that began a few years back. Among unaccompanied children whose cases began between 2007 and 2011, 76 percent of resolved cases were decided with the migrant in attendance. By contrast, in 2005 and 2006?around the time of the last surge in Central American migration?61 percent of child cases were decided with the child in court. If history is a reliable indicator, the percentage of children from the latest wave who attend court may fall in this general range of 60 to 80 percent. 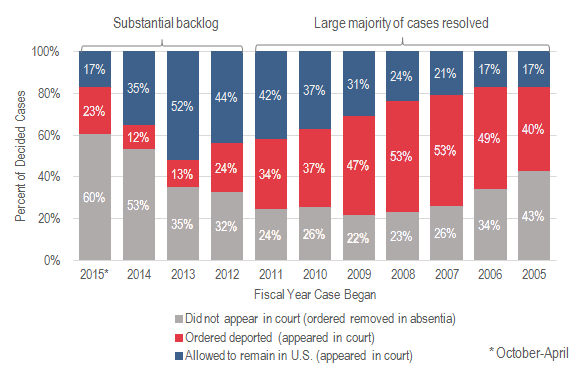 More detailed data could enable stakeholders to draw more certain conclusions about recent cases. Namely, if data described the percentage of pending cases that already had an initial court date, it might be easier to speculate about how many cases might ultimately be decided in absentia. However, this would still require the observer to make assumptions about the migrant’s future behavior?for example, some portion of migrants who attend their initial hearing may not attend the next one.

Previously, we have written that backlogs in the immigration court system are harmful to the enforcement system and to the immigrants. The unsatisfying answer to today’s simple question illustrates that the backlog can also make it harder to answer questions that would be informative to policymakers and the public. Until more cases work their way through the court system, historical data will provide the best look at how many children show up for their date in immigration court.


View all data on immigration court outcomes for unaccompanied children

Child Deportations: How Many Minors Does the U.S. Actually Send Home?