We commend our federal colleagues for finding their way through to agreement on reopening the government and giving the federal government the authority it needs to borrow additional funds to meet its obligations. We regret that the agreement is only for a few months and unfortunately, we expect will result in a repeat of what we have just been through in late January 2014.

Congress and the Administration have given themselves a little breathing room to revisit issues and try to find agreement. The budget conference committee convened between the House and Senate has until December 13th to hammer out a budget agreement.

Governors in every state were impacted by the shutdown because every state has at least a federal facility, federal workers, Native American tribes, environmental programs, housing programs, members of the military, Head Start programs, road projects or national parks. At least five states used state funds to reopen national parks closed during the shutdown. They stepped in to meet the needs of their states and their constituents when they were abandoned by federal decision-makers.

The members of BPC’s Governors’ Council all served during the Great Recession. We made a lot of very painful cuts to programs and struck a lot of deals to get our budgets through. However, at no point in any of our terms did we think that shutting down our states was a realistic option.

Some have argued that most states are so dominated by one party or the other that the views of the governors are not credible. The argument goes that the governors do not face the same partisan pressures as Washington does. These same individuals ignore the fact that five of the federal shutdowns occurred during unified government.

Furthermore, there are twelve states where the governor’s mansion is held by a different party than at least one of the legislative chambers ? this year. That changes with each election and there are numerous states currently under one party control that often experience divided government, including AZ, AK, FL, IN, MI, MN, NC, OH, PA, and TN.

In fact, in some cases, divided government has lead to innovation. The BPC earlier had praised Governor Mike Beebe, the Democratic Governor of Arkansas, for developing an innovative way of providing health coverage without expanding Medicaid earning the support of his Republican legislature. His example has been replicated in other states, including by Republican Governor Terry Branstad of Iowa. This is the type of leadership Washington needs.

In the six budget cycles since the beginning of the recent recession, there were between 18 and 24 states that had divided government. These states?which cannot deficit spend?faced the need for decisions about revenues and cuts that were extremely difficult and divisive. In the states with divided government (the governor and one or both of the legislative bodies being held by different political parties), compromises were found and budgets passed 774 times with only 3 shutdowns. That’s an impressive record and one we KNOW our federal colleagues can replicate if only they would work together.

Part of the reason states are more able to find areas of agreement may be due to the fact that most states have a balanced budget amendment requiring them to balance their budgets each year. As a result, state policymakers are building relationships that help them in other policy areas.

On showing up for work and doing their job, governors clearly have a better record than federal policymakers and those in Washington could learn a lot from their state brethren. 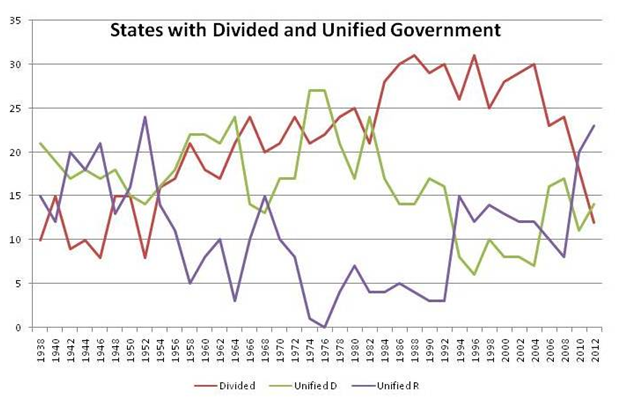 Douglas served as governor of Vermont from 2003 to 2011. He is now a member of BPC’s Governors’ Council.

15171
On showing up for work and doing their job, governors clearly have a better record than federal policymakers