On October 16, Congress passed legislation which the President signed the following day to fund the federal government through January 15, 2014 and suspend the current debt limit through February 7.

Also under the agreement, Budget Committee heads Republican Rep. Paul Ryan of Wisconsin and Democratic Senator Patty Murray of Washington convene a conference reconciling the two very different versions of a federal budget blueprint passed earlier this year by the House and Senate chambers. The budget resolution conference is instructed to report back an agreement by December 13. However, failure to reach an agreement carries no direct penalty. Congress has not reached a budget conference agreement for the last four years.

This chart below shows the calendar for upcoming budget actions and deadlines ? including BPC’s estimated “X-Date” following the February 7th expiration of the debt suspension period. The BPC estimates that the new date on which the U.S. will be unable to meet all of its financial obligations in full and on time due to a breach of the debt limit could come as early as late February or early March. 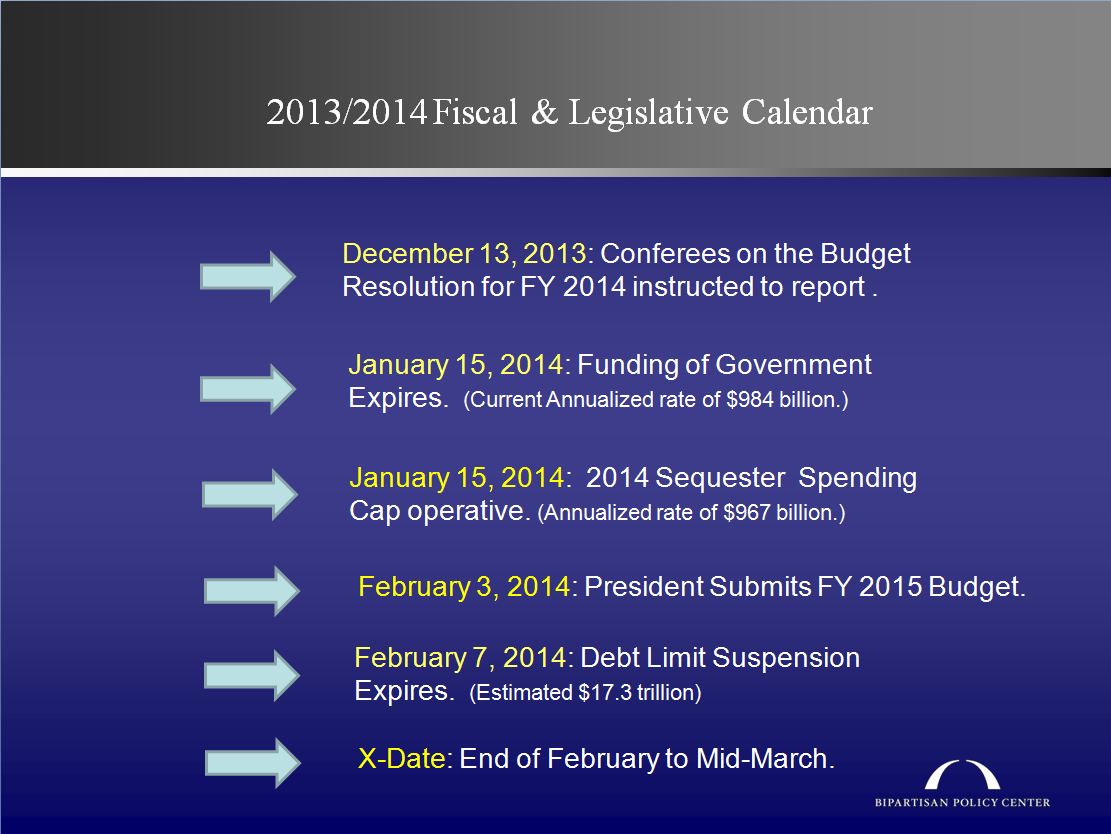 The importance of the budget conference committee’s efforts cannot be overstated. While a budget conference agreement is not substantive law it does, however, establish agreed to and enforceable revenues and spending targets to align the nation’s future fiscal direction. It sets the parameters for the spending and taxing committees to go to work and enact legislation that does become law following the common blueprint adopted in both chambers. In this particular instance, passing a budget could be crucial to avoiding yet another potential government shutdown come January 15 and setting agreed to level for raising the country’s statutory debt limit. What are the major issues that will be deliberated in this important conference? Essentially, they break down into three different components:

The House budget aims to balance the federal budget in 10 years by reducing spending, repealing the Affordable Care Act, and block-granting Medicaid and reforming Medicare. It also calls for tax reform that would remain “revenue neutral,” which is to say it would raise the same level of revenues as today’s tax code.

The Senate budget takes the approach of raising $833 in new revenues. It would reduce budget deficits (which occur when government spends more than it takes in for a given fiscal year) but not balance the budget. The Senate budget also does not require significant entitlement reform.

Some Democrats have said they would potentially consider reforms as part of a broader package that includes revenue increases. Republicans generally don’t want to agree to any revenues resulting from increasing tax rates, with some making the argument that they had consented to a tax increase on high income earners at the beginning of this year to avoid the so-called “fiscal cliff.”

You can see the differences in approach reflected in the numbers in the following charts.

In this first chart below, under current law, total funding for that portion of the government funded annually through January 15 remains at $984 billion. This is the funding that was shut off on October 1, and resulted in “government shutdown” for 16 days.

The level of funding for this portion of the government for the current year as mandated under the 2011 debt ceiling agreement is $967 billion. That level has been overridden by the current agreement to temporarily fund these programs at the $984 billion “continuing funding resolution” until January 15. If no agreement is reached in the budget conference agreement the operative funding level would drop to the $967 billion figure well below the the President’s and the Senate’s budget blueprint total $1.058 trillion, $92 billion more than the sequester level. While the House budget assumes the lower sequester level of $967 billion it would significantly modify the mix of spending between defense and non-defense spending. 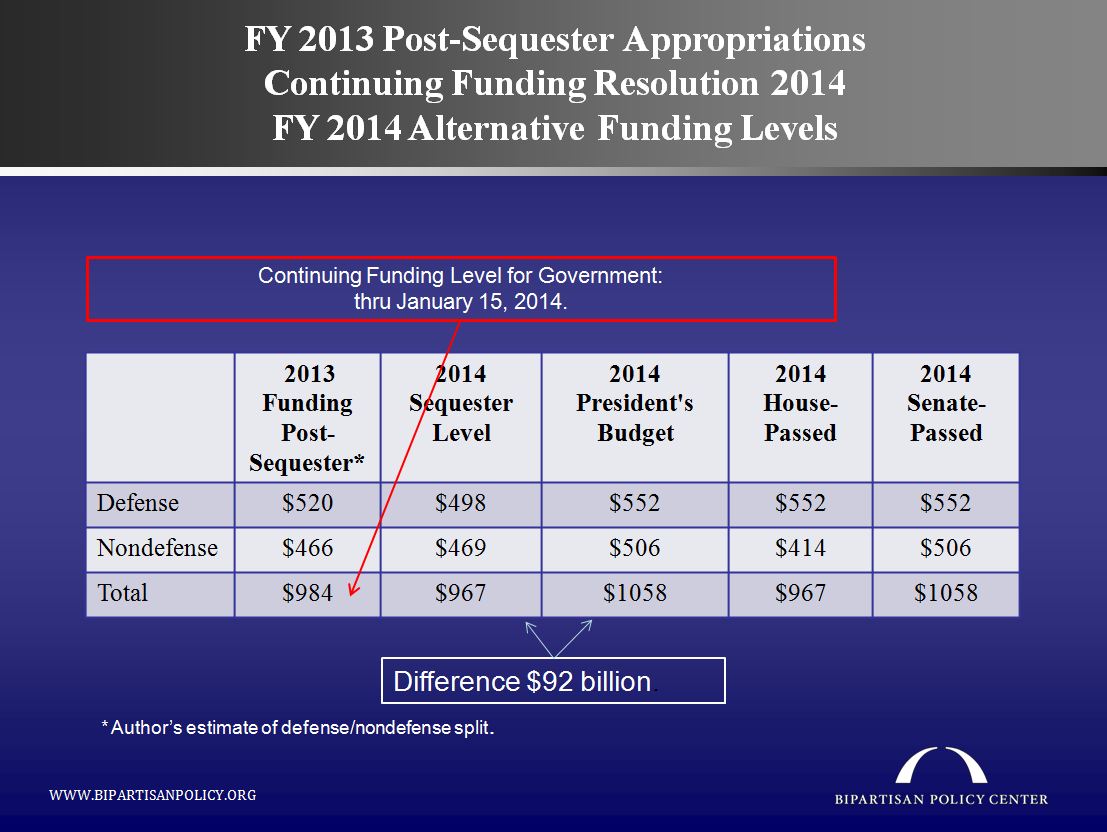 This final chart below provides some points of comparison on how much each budget would reduce the deficit over the budget “window” of ten years, and how those reductions would be achieved.

Under the President’s budget, the deficit would be reduced by $1.146 trillion, the Senate by $1.756 trillion, and the House by 5.733 trillion. As you can see, the House budget achieves additional savings through entitlement reform, as well repeal of the Affordable Care Act. The President’s and Senate’s budgets contain revenue increases, while the House does not. 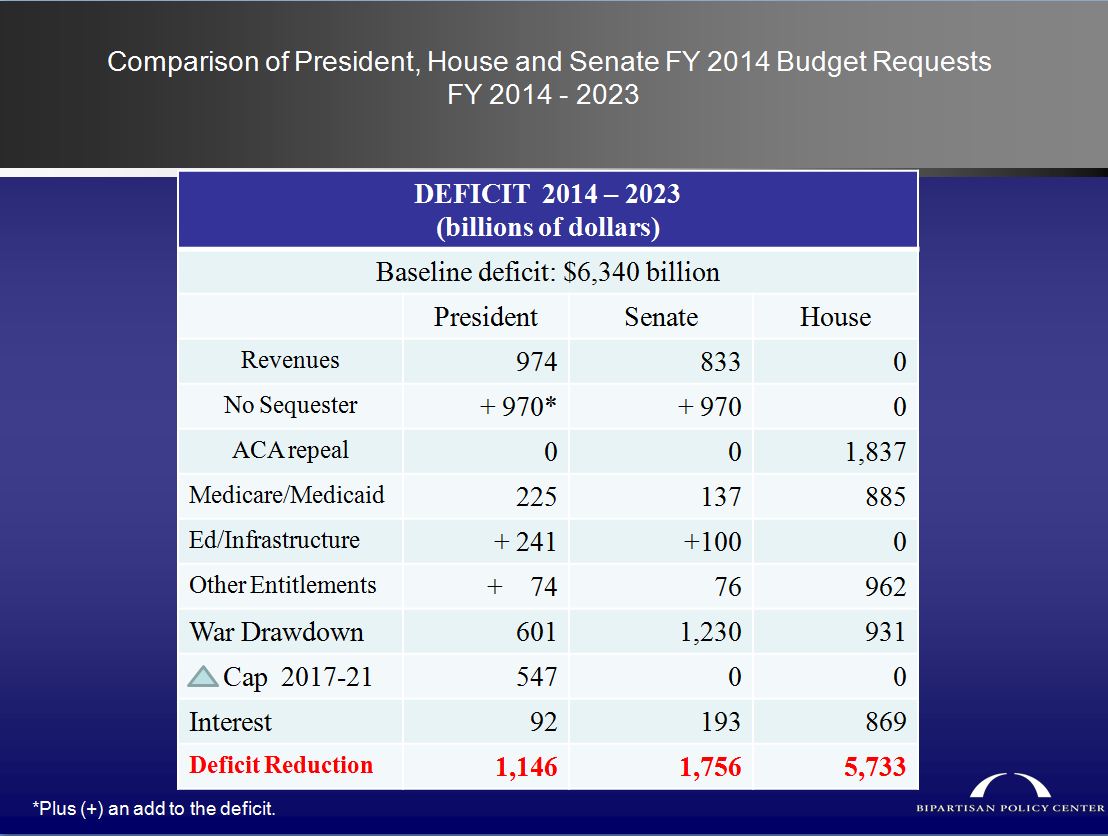 The challenge of finding a compromise between the two visions of what fiscal policy the country should pursue in the future will be daunting in this conference. It is possible that rather than reaching any major agreement to address the long term debt burden awaiting future generations on our current fiscal path, that this conference ? if it is to reach any agreement at all ? will simply find the least common denominator between the two diametrically opposite plans. This would include some adjustments to the 2014 sequester levels to add additional spending to defense and non-defense appropriations, offset with minimal out-year savings from farm price support and federal pension programs.

Given the dysfunctional nature of Congress, even this minimal agreement might be looked on as progress, but the longer term challenges to the country’s fiscal future will remain for another Congress or even another President to address.

The Common Ground Project provides you with real-time insights into key issues before Congress, what’s holding back passage of legislation, and where there might be common ground.