Budget season for fiscal year (FY) 2013 began last month, when President Obama released his plan for tax and spending policy over the next decade. In recent days, House Republicans under the leadership of Budget Committee Chairman Paul Ryan and the Congressional Progressive Caucus (CPC) both submitted budgets of their own. House Democrats added their voice to the mix yesterday.

We provided objective summaries and analyses of the earlier plans (Ryan and CPC), and we will continue that series in the coming days with posts on the bipartisan Cooper-LaTourette proposal, and submissions from the Republican Study Committee and the Congressional Black Caucus. Below we focus on the Democratic House budget.

The House Democrats’ plan looks very similar to the budget offered by President Obama. The Democratic House budget follows the president’s conceptual approach in many areas, including near-term growth initiatives, a higher income tax burden on upper-income individuals, corporate tax reform, replacement of the sequester cuts, and reforms to agriculture subsidies. The overall level of debt reduction achieved by the two proposals is comparable.

On the other hand, the Democratic House budget is easily contrasted with Chairman Ryan’s plan that passed through his committee. House Democrats would enact immediate deficit spending intended to facilitate economic growth, while the Ryan budget would not. The Democrats propose to raise the top tax rate for individuals, while the GOP budget would lower it. House Democrats would collect additional revenues for deficit reduction, while the Republican budget would not. The Democratic budget for health care solely focuses on implementation of the Affordable Care Act (ACA), whereas Ryan’s budget repeals the ACA, implements premium support for Medicare, and block grants Medicaid. The policy summaries of these two budgets epitomize the substantial ideological divide that exists between the parties today.

Notably, the Democratic House budget lacks specific policy proposals for any of three largest entitlements in the budget: Social Security, Medicare, and Medicaid. There is no way to stabilize our debt over the long run without reforms to some or all of those programs.

What follows is an objective analysis of the House Democrats’ proposed budget. As with our analysis of previous budgets, this post will focus heavily on the 10-year budget window. Although it is critical to understand the long-term effects of major policies included in any debt reduction plan, significant uncertainty in projections and lack of specificity in policies make concrete scoring beyond the first decade extremely difficult for these packages.

The budget appears to contain a moderate gap between the quantitative spending reductions detailed according to budget function, and the qualitative policies that would support those figures. For purposes of this analysis, we accept the budget’s bottom-line spending targets, but note that the plan is not always entirely clear about how the policies match up with the figures provided.

As expected, the House Democrats propose similar levels to President Obama for debt, spending, and revenue. Debt as a percentage of our economy, or gross domestic product (GDP), would reach 74 percent by 2022, slightly lower than the 76 percent achieved by the president’s budget, with marginally lower levels of both spending and revenues. Although the Democratic House budget reduces the ratio of debt to GDP from the BPC Plausible Baseline*, debt would remain significantly higher than the levels achieved by the Bipartisan Policy Center’s (BPC) Domenici-Rivlin Task Force and the Bowles-Simpson Commission (both of which reduce the debt to 67 percent of GDP by 2022), as well as the House Republican budget (62 percent of GDP).

The charts below illustrate the revenue and spending levels achieved in 2022 by each major budget plan, and what each would do to the debt over the next 10 years: 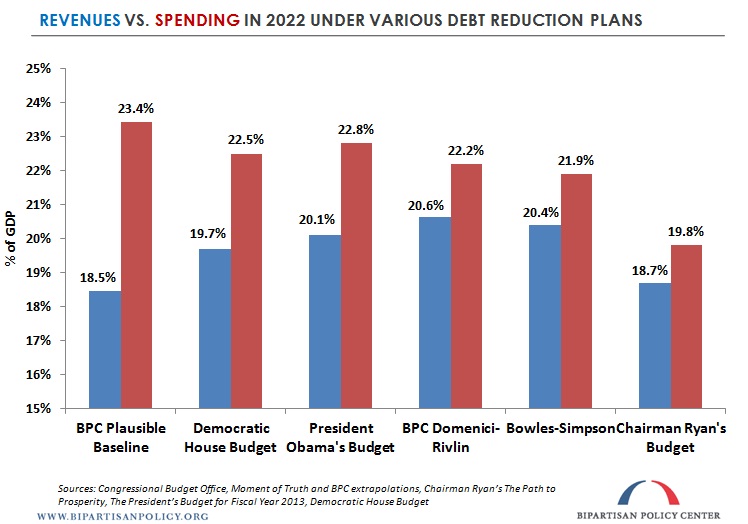 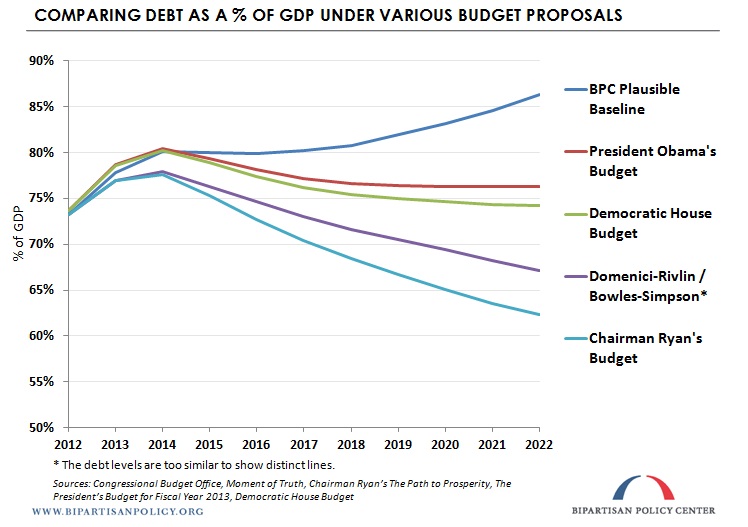 The Democratic House budget would require an increase in the debt ceiling of roughly $8 trillion through 2022, an amount roughly equivalent to that necessitated by President Obama’s FY 2013 proposal. Both the Ryan and CPC budgets would require a smaller increase over the coming decade of approximately $5.5 trillion.

House Democrats propose to allocate substantial funds to initiatives intended to grow the economy and increase domestic investment. Some of these proposals have been circulating for the past few years, and President Obama included many of them in his American Jobs Act (and subsequently, in his FY 2013 budget). They include both targeted tax cuts and spending increases, appearing to total roughly $200 billion over the decade. Below is a sample of the proposals:

House Democrats do not make any particular proposals for Medicaid. The budget solely states an opposition to block granting the program, a policy recommended by Chairman Ryan.

The plan does not make any specific recommendations for Medicare, only stating an opposition to premium support.

The Democratic House budget does not propose specifics on Social Security reform. It simply states that “privatization” of the program should be off the table. Chairman Ryan’s House GOP budget and President Obama’s submission similarly avoided detailed policies.

House Democrats propose changes to the tax code that are very similar in nature to those proposed in President Obama’s FY 2013 submission. All of the increase in revenues is collected from upper-income Americans, with no increase in the tax liability of individuals with adjusted gross income below $200,000.

There are a number of major policies included in the revenue package, but most analysts would agree that it falls short of comprehensive reform, because many of the tax code’s complexities and inefficiencies remain in place. Below are some of the specific proposals for the individual income tax:

The budget also encourages limitations on individual income tax expenditures for those taxpayers earning over $1 million annually, but provides no specifics in that area. As for corporate taxes, House Democrats endorse the framework outlined by President Obama earlier this year. The reform would be revenue neutral. It would lower the top marginal corporate tax rate in exchange for broadening the base by closing a variety of corporate tax expenditures, including preferences for oil and gas exploration, and for corporations that move American jobs overseas. Many of the remaining details remain unspecified.

Under this reform, the research and development tax credit would be extended. The plan also advocates the extension and enhancement of clean energy incentives in the tax code.

House Democrats would replace all nine years of scheduled sequestration to annually appropriated (discretionary) spending with alternative deficit reduction (as outlined herein). The sequester would be turned off for both the defense and non-defense categories. Therefore, the budget abides by the discretionary spending caps established in last summer’s Budget Control Act (BCA).

The Democratic House budget also mandates that all spending for Overseas Contingency Operations (OCO) is zeroed out after FY 2014. This would end all explicit spending for overseas military engagements, and force any expenditures for those purposes to fit under the defense discretionary spending cap. For reference, President Obama, BPC’s Domenici-Rivlin, and Bowles-Simpson all budget for OCO spending of roughly $40 billion annually through the remainder of the decade.

One other particular policy mentioned in the budget for discretionary spending would give all active-duty combat troops an additional bonus. 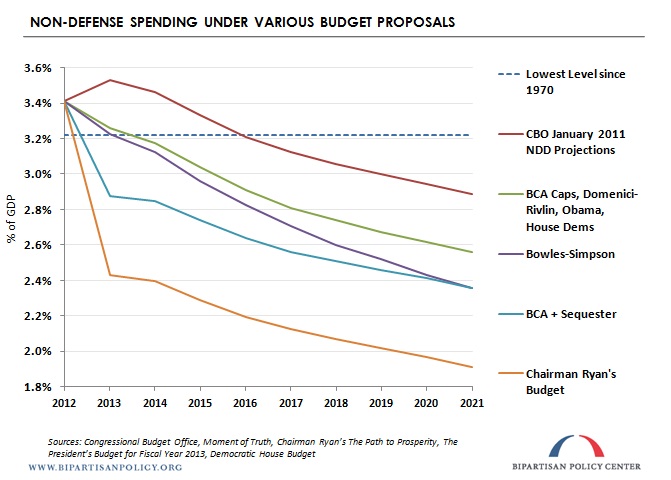 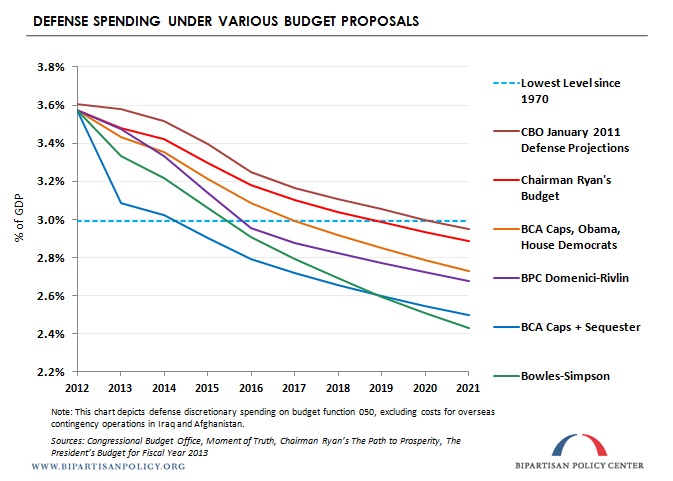