The final version of the FY2017 Omnibus Appropriations bill contained $15 billion in additional money for the Department of Defense (DOD).  While this was only half of the increase requested by President Trump, it could be a sign that defense spending may have turned a corner after almost a decade of stagnant appropriations.

This is the first increase in the defense base budget that has exceeded spending caps imposed in the Budget Control Act of 2011 that did not require the same size increase in non-defense appropriated spending.

Current budget debates are not focused on these true drivers of federal spending.

Critics note correctly that even if Trump gets his entire $54 billion increase in FY2018, total defense spending for that fiscal year will be slightly less than what President Obama requested for FY2018 in his final budget. The key to the trajectory of defense spending is whether Congress will repeal the “sequester caps” in current law. Those restraints on appropriations first appeared because of the Budget Control Act of 2011, curtailing both defense and non-defense spending in a ham-handed, counter-productive manner.

Given recent testimony from the Vice Chiefs of Staff about the readiness crisis facing the military, the Air Force, for example, faces a major pilot shortage, combined with growing strategic uncertainty abroad, the increases in defense spending being enacted for FY2017 and considered for FY2018 are only appropriate. But even, or perhaps especially, as appetite builds to close the gap between current defense spending levels and what was deemed the minimal strategically acceptable budget by former Defense Secretary Robert Gates, the need to reform defense spending remains. Nowhere is this more true than when it comes to the burgeoning cost of personnel. Smart reforms to the personnel system?like those recommended in BPC’s report on a FAST Force are needed to ensure additional defense dollars are used wisely and to prepare the military for future threats.

It may well be that some of the weakness characterizing the present economic recovery relates directly to the false economy of the artificial sequester caps.

BPC’s economic policy team has strongly argued against the sequester on both economic and government efficiency grounds.

BPC’s economic policy team has strongly argued against the sequester on both economic and government efficiency grounds, and Congress has increased the caps slightly twice. However, the first thing Congress should do as it contemplates the FY2018 budget is to eliminate the sequester cap regime entirely. Only then can defense and non-defense agencies plan systematically and begin to prioritize programs once again.

A larger, strategic concern forms as a result of stunted defense and non-defense appropriations. These programs remain the smallest and slowest growing parts of the federal budget. As we have reviewed earlier, Congress can get looming trillion dollar deficits under control only with serious tax reform and fundamental changes in entitlement spending. Current budget debates are not focused on these true drivers of federal spending — entitlements such as Medicare, Medicaid, and Social Security, and interest payments on the federal debt, comprise two-thirds of federal spending. 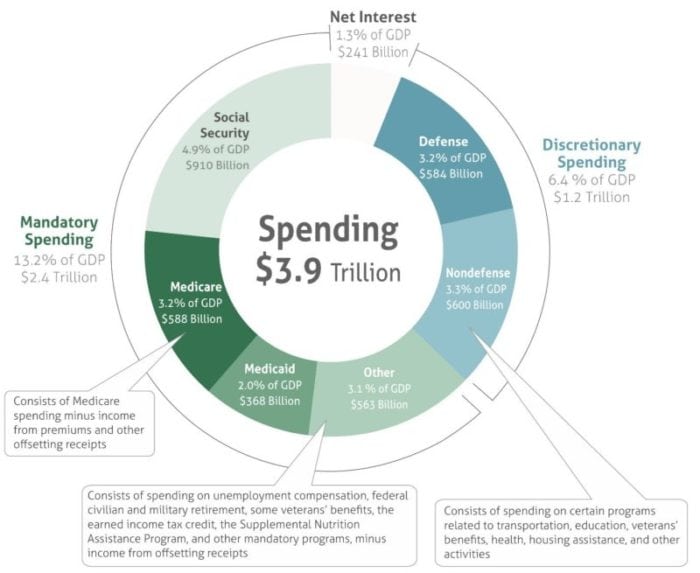 This imbalance between spending that fires future economic growth, like defense and non-defense appropriations spending, and spending that funds present consumption, like entitlements, remains the single most serious strategic budget decision facing Congress and the White House.

We have reached a tipping point where America may have to face a painful and critical decision between “guns and butter” and that could have enormous consequences. Continuing Resolution Will Have Negative Impact on Government Operations