Whereas the sequester for Fiscal Year (FY) 2013 cut across-the-board with an axe, the 2014 sequester gives Congress an opportunity to use a scalpel to make the most of the mandated spending reductions. To achieve the magnitude of reductions necessary, though, it’ll have to be a pretty sharp scalpel.

As we’ve laid out before, the Budget Control Act of 2011 (BCA) created the sequester as a backstop that was intended to force the Joint Select Committee on Deficit Reduction ? or, “Super Committee” ? into action. With the failure of the Super Committee, those automatic spending reductions were set into motion, scheduled to reduce approximately $1 trillion from federal budgets between FY 2013 and FY 2021. The “fiscal cliff” deal struck on New Year’s Day ? the American Taxpayer Relief Act of 2012 ? then reduced the size of the FY 2013 sequester by $24 billion (from $109 billion to $85 billion) and also lowered the BCA (pre-sequester) caps on discretionary appropriations in FY 2013 and FY 2014 (by $4 billion and $8 billion, respectively).

Despite extensive debate, the FY 2013 sequester took effect on March 1 and is currently in the process of reducing by roughly $80 billion in an across-the-board fashion all non-exempt discretionary (or annually appropriated) and mandatory spending programs.*

For FY 2014 (and for 2015-21), however, while mandatory programs will continue to be reduced in the same automatic manner, appropriators are simply given top-line discretionary caps ? one for defense discretionary and another for non-defense discretionary spending ? and the power to distribute the requisite reductions as they please. So long as the sum of their individual subcommittee bills stays within those caps (which total $967 billion), any permutation of program or account appropriations is allowed.

Going into a bit more detail, the BCA dictates that the FY 2014 sequester reductions will take place as follows: 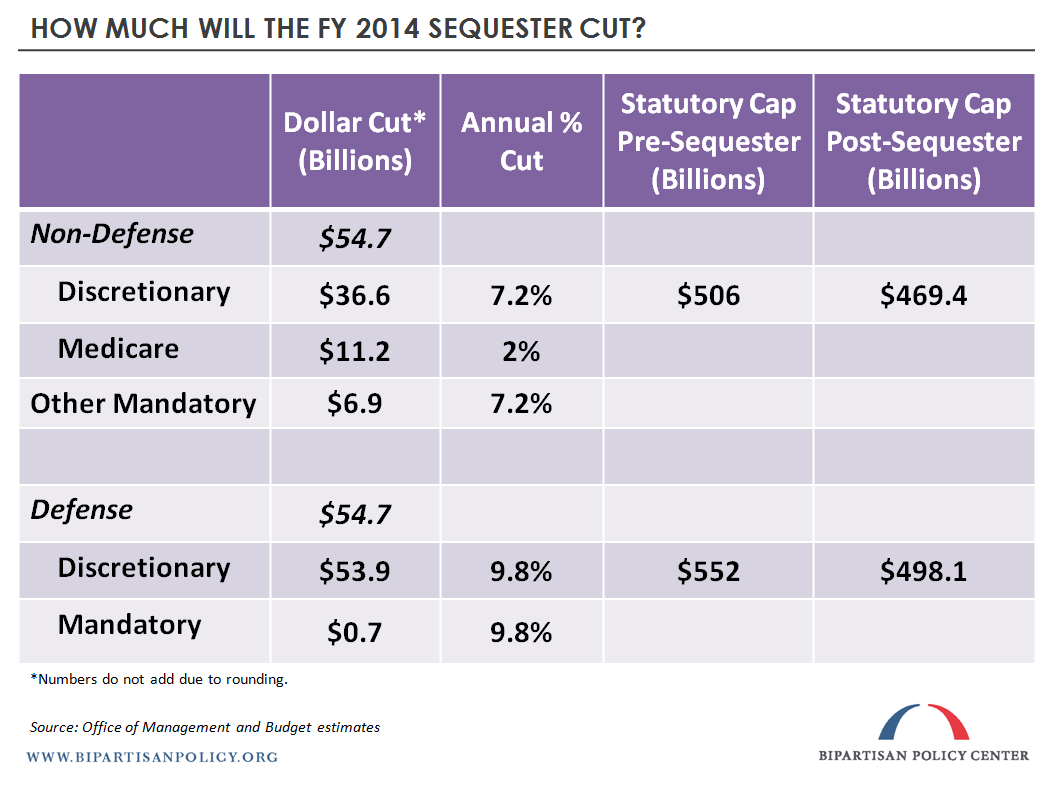 Therefore, on October 1 (the beginning of FY 2014), the ongoing reductions to non-exempt mandatory programs will continue, except that their magnitude will jump to 7.2 percent from the current 5.1 percent (for the programs where cuts are not limited to 2 percent). A significant majority of mandatory spending will continue to be exempt from sequestration: Social Security, retirement programs, veterans’ benefits, refundable tax credits (such as the Earned Income Tax Credit and Child Tax Credit), Medicaid, the Children’s Health Insurance Program (CHIP), standard unemployment insurance, food stamps (SNAP), Temporary Assistance for Needy Families (TANF), and a host of other programs (many of them part of the safety net) are all exempt from the sequester ? see the Statutory Pay-As-You-Go Act of 2010, starting on p. 22, for a list of all exempt programs.

For discretionary funding, lawmakers already know the statutory limits under which they are required to appropriate ($498.1 billion for defense and $469.4 billion for non-defense), and therefore have the ability to allocate reductions in a more rational manner than in FY 2013. But, as lawmakers continue to seek ways to replace the sequester with better targeted spending and/or tax reforms, an agreement to abide by even top-level sequester discretionary funding ? much less particular program allocations ? won’t come easily. That the Senate and House budgets are $91 billion apart on FY 2014 appropriations exemplifies this chasm. 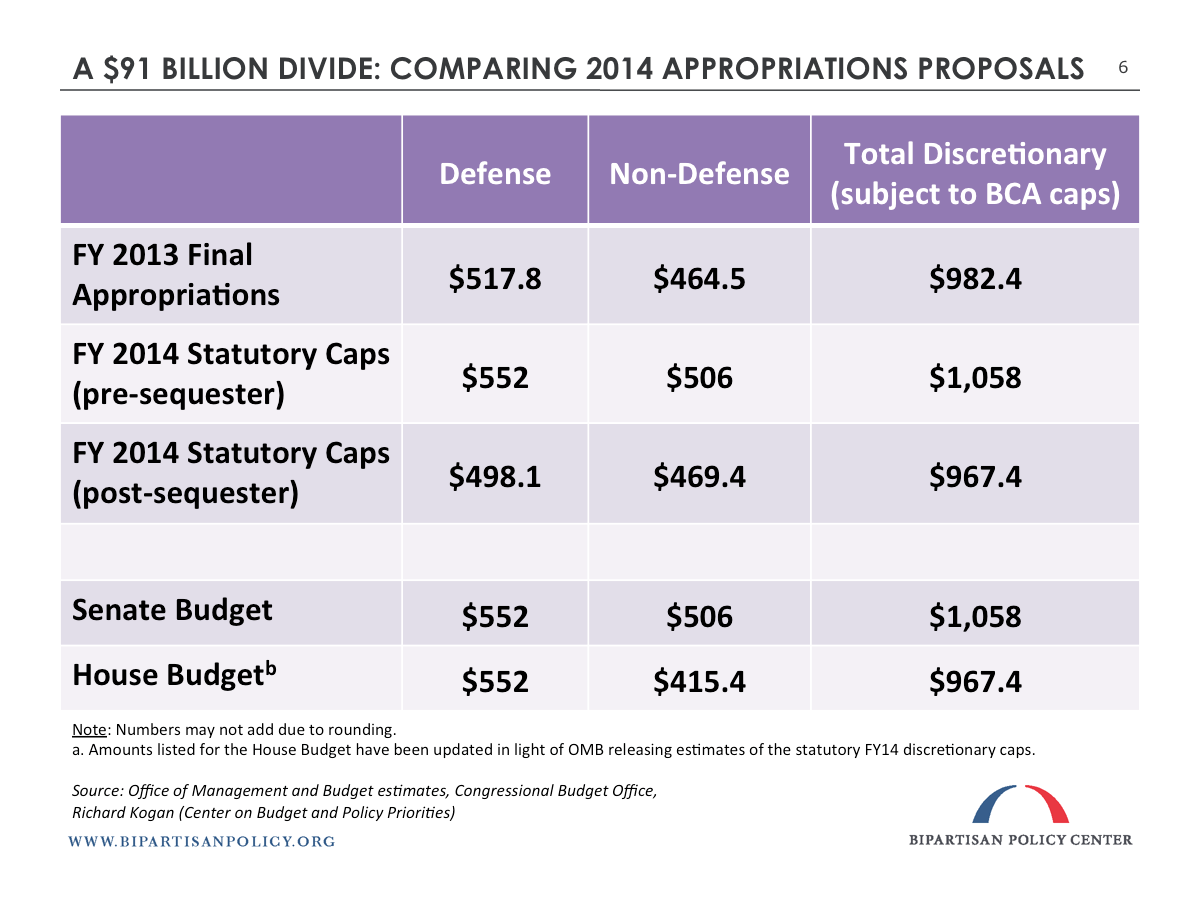 So, what happens if lawmakers are unable to reach agreement on discretionary appropriations at the reduced statutory cap levels and instead pass a continuing resolution (CR) at higher levels?*** Unless the BCA is also modified, an across-the-board sequester ? just as indiscriminate as this year’s ? would take effect to eliminate any breach above each of the caps. Any sequester of discretionary funds, however, wouldn’t begin until 15 days after Congress adjourns (most likely meaning January), setting up another potential period of substantial uncertainty for federal agencies, grant recipients, and the broader economy.****

** Cuts to the mandatory portion of funding for Indian Health and Community and Migrant Health Centers are also limited to 2 percent.

*** To pass appropriations above either of the caps, though, a CR or any omnibus would be subject to a 60-vote point of order in the Senate, thus requiring broad agreement.

**** See our timeline of fiscal events for more on how the calendar now looks.

The Sequester Begins to Get Serious

How $85 Billion Became $80 Billion: The Story of the Shrinking 2013 Sequester