Energy innovation is rising to a priority discussion in the United States, as last week both chambers of Congress acted on legislation that will guide the course of federal science and R&D investments for years to come. The House of Representatives narrowly passed its version of the America COMPETES Reauthorization Act (H.R. 1806), while in the Senate a bipartisan set of seven members introduced their version of energy-specific provisions in America COMPETES.

What is the America COMPETES Act?

How is energy innovation included in the America COMPETES Act?

Several measures of the America COMPETES legislation are particularly salient for increasing public investments in energy innovation. These include authorizations for funding of:

In additional to energy innovation, America COMPETES authorizes other measures, including STEM education and workforce programs, research programs, and innovation programs at non-DOE agencies that contribute to the broader goals of energy innovation-driven growth and competitiveness. As a result, responsibility for the bill is spread across multiple committees, with the Committee on Science, Space, and Technology reporting the bill in the House and the Committee on Commerce, Science, and Transportation reporting the bill in the Senate.

Committees of Jurisdiction for America COMPETES

May 2005: In response to a bipartisan Congressional request for a science and technology strategy to enhance U.S. competitiveness, the National Academies creates the Committee on Prospering in the Global Economy of the 21st Century, chaired by AEIC principal Norm Augustine and including CEOs of Fortune 100 companies, Nobel laureates, major universities, and former officials of both parties.

2007: The committee publishes the report, Rising Above the Gathering Storm, which identifies two key challenges for American competitiveness: creating high-quality jobs and responding to the nation’s need for clean, affordable, and reliable energy. The report lays out several recommendations to improve STEM education, attract and train STEM graduates, increase public investments in basic research, and create incentives for technology innovation.

2010: The National Academies publishes a follow up report that finds the U.S. competitive posture has worsened, as the progress of other nations, particularly China, is outpacing the efforts of the U.S.

October 2013: The authorizing provisions of the America COMPETES Act expire.

September 2014: Under the American Academy of Arts and Sciences, a similar committee again chaired by AEIC principal Norm Augustine publishes an additional follow up report that finds the U.S. is failing to keep pace with other countries’ investments in R&D and STEM education.

Summary: The America COMPETES Act of 2007

Congress passed the original America COMPETES Act with strong bipartisan support on August 2, 2007, and it was signed into law by Republican President George W. Bush shortly thereafter. It passed the Senate by unanimous consent, and it passed the House by 367?57.

The law authorized $33.6 billion in appropriations between FY 2008-10, with R&D funding levels at NSF and DOE Office of Science at a growth rate (10.3%) consistent with a 7-year doubling path. Additionally, the law authorized ARPA-E for the first time.

America COMPETES was not fully funded, and a number of initiatives did not receive appropriations.

* Does not reflect sequester

America COMPETES in the Senate

America COMPETES in the House

The Doubling Trajectory for R&D

Appropriations have fallen short of authorized levels most years, and appropriations have even declined some years as authorizations increased. Even with commitment to increasing energy innovation investments in the next reauthorization of America COMPETES, historic underfunding kicks the can down the road on the original COMPETES vision of doubling U.S. energy innovation investments. 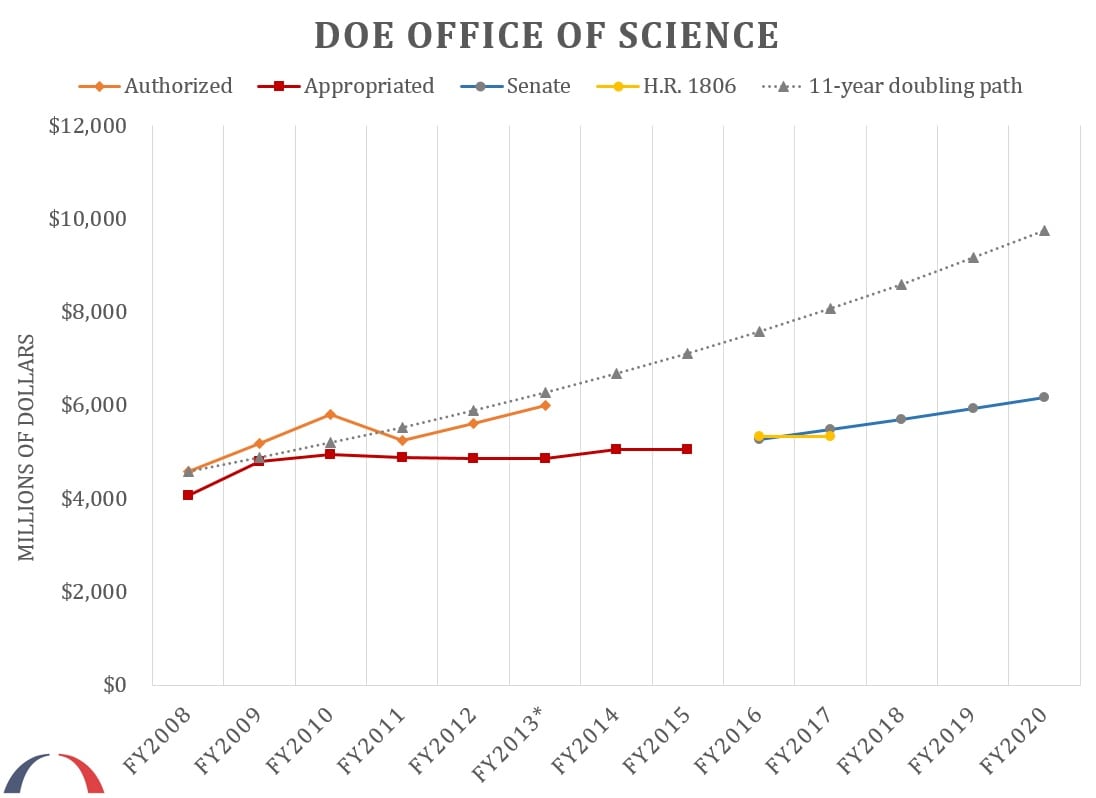 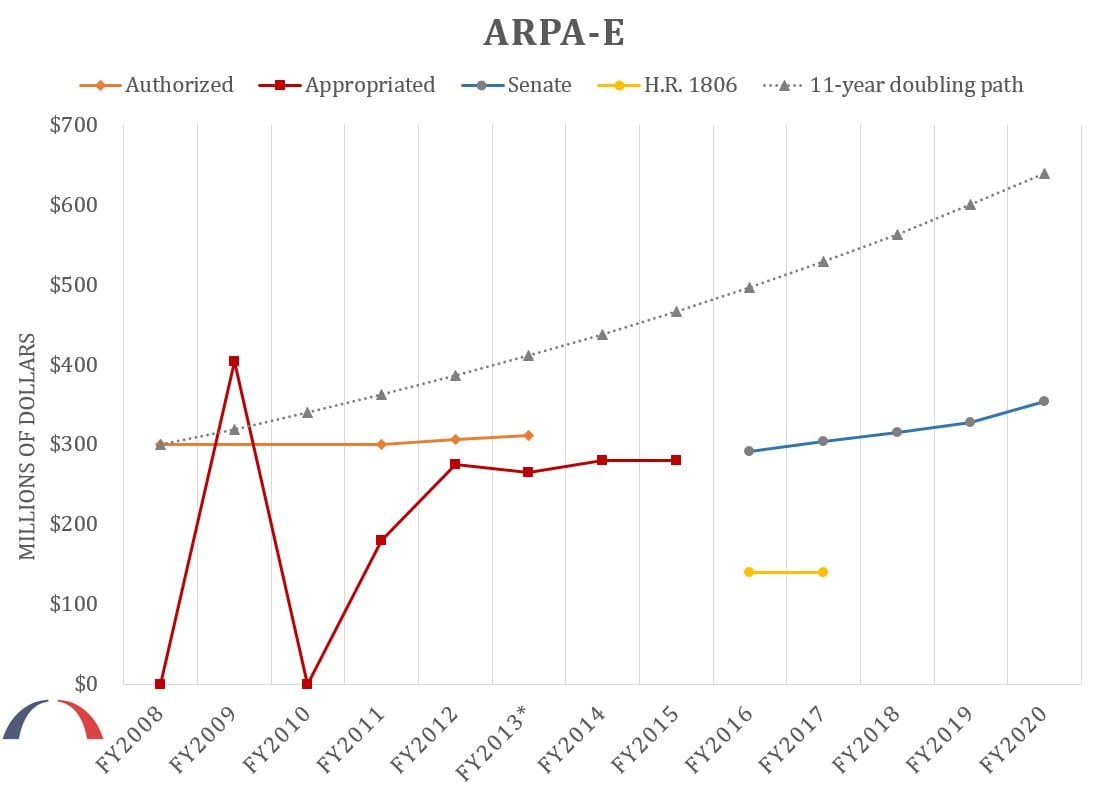 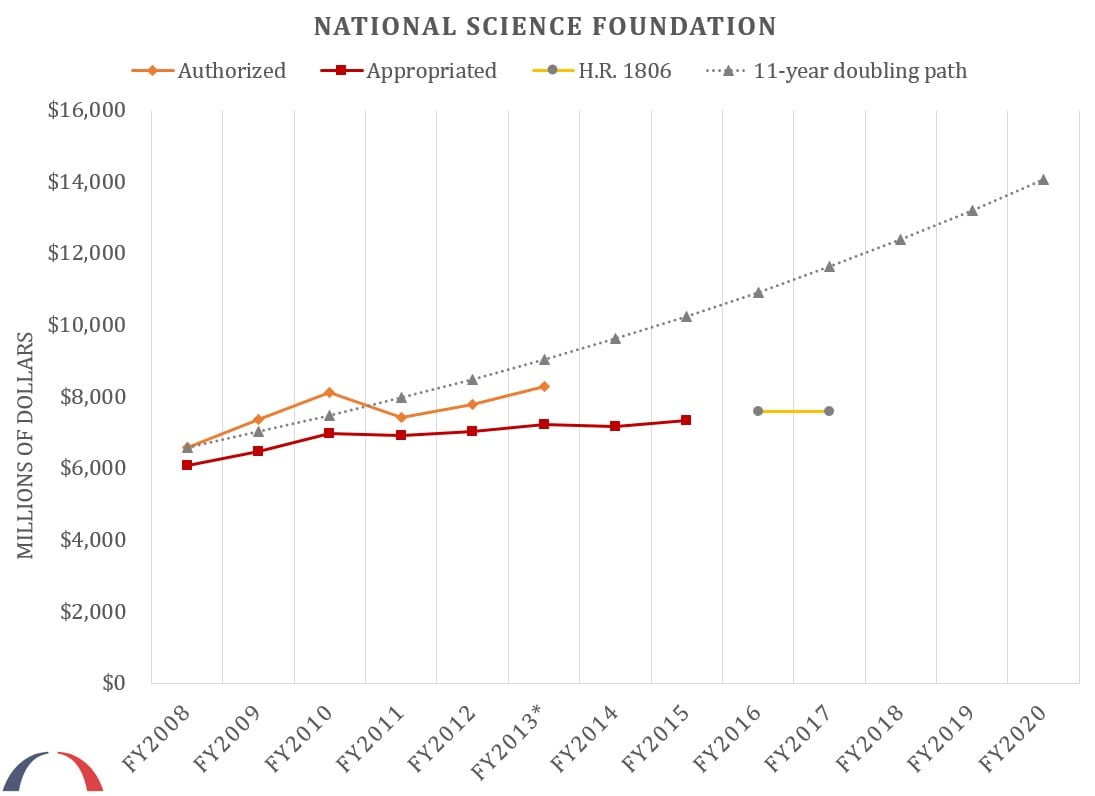 * FY2013 numbers do not reflect reductions from budget sequestration

BPC and AEIC strongly support consistent and growing authorizations for ARPA-E, DOE’s Office of Science, and other innovation investments critical to U.S. economic competitiveness. Other countries are raising their public energy RD&D investments and claiming global technology market share?particularly China. The United States must commit to greater and smarter investments in energy technology now to capture its remarkable energy promise and take advantage of the competitiveness opportunities they afford.

Energy Innovation Back on the Federal Agenda