One might think that Brad Carson’s difficult confirmation hearing for the position of undersecretary of defense for personnel and readiness before the Senate Armed Services Committee earlier this year meant that a collection of defense personnel reforms he championed, collectively known as “Force of the Future,” would be dead-on-arrival on the floor of Congress. However, a close examination of this year’s Senate-passed version of the National Defense Authorization Act (NDAA) reveals that this is not the case. Some of the most innovative ideas proposed in Force of the Future are addressed in the Senate-passed NDAA and are now being negotiated by the conference committee for inclusion in the final bill.

Some of the most innovative ideas proposed in Force of the Future are addressed in the Senate-passed NDAA.

Carson was Defense Secretary Ash Carter’s point man for Force of the Future and, last February, was nominated to serve as the undersecretary of defense for personnel and readiness USD(P&R), a position in which he had been serving in an acting capacity for nearly a year. His confirmation hearing featured several testy exchanges with senators over the way Force of the Future proposals were crafted and his outreach efforts to the Armed Services Committee on those proposals. Sen. John McCain (R-AZ), chairman of the Senate Armed Services Committee, described Force of the Future as “solutions in search of a problem” and “an outrageous waste of official time and resources.”

Shortly after Carson’s combative confirmation hearing, he withdrew his name from consideration to serve as USD(P&R) and resigned from his acting role at the Pentagon. Outside observers speculated that the Force of the Future reforms requiring legislative action would never see the light of day in this year’s NDAA. However, despite a rough reception, it appears as though many reforms are included in the Senate’s version of the defense bill and Senate defense leaders appear to have changed their tune in recent months. 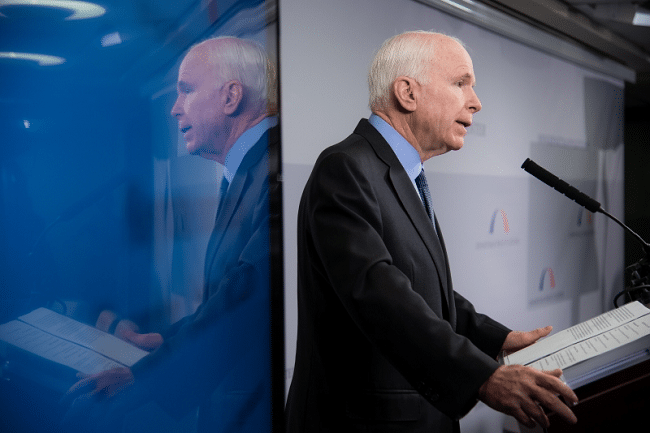 At a recent event at the Bipartisan Policy Center, Sen. McCain said that the question is “whether our military is able to recruit and retain so many excellent Americans because of its personnel system or in spite of it? I’m concerned that all too often it is the latter.” As it relates to Force of the Future, McCain also said there is a “need to advance bipartisan reforms to the defense personnel system to better support our warfighters and their families.” The Senate’s version of the NDAA certainly seems to advance many of the most revolutionary Force of the Future proposals and reinforces McCain’s pursuit of personnel policies that better support service members.

Although the Pentagon’s original draft Force of the Future package contained 28 specific recommendations to update military and civilian personnel policy, not all 28 recommendations require legislative action to implement. However, many of the more ambitious proposals do require changes to existing law. The Senate-passed NDAA contains at least 17 specific sections that advance Force of the Future ideas (see table 1).

The question, McCain noted recently at BPC, is “whether our military is able to recruit and retain so many excellent Americans because of its personnel system or in spite of it.”

Among the 17 sections are some fundamental changes to long-standing personnel policy. For example, Section 503 of the bill would temporarily remove the cap on the number of field grade officers allowed to serve on active duty. These caps are a cornerstone of the Defense Officer Personnel Management Act of 1980, which strictly limits military officer careers. Temporarily removing the field grade officer caps would allow the Pentagon to develop new methods of attracting and retaining talent in critical career fields, especially high-demand specialties like aviation. It also allows the military to modify the “up-or-out” system that forces officers to leave military service when not selected for promotion.

Another major idea from Force of the Future is “lateral entry,” which would allow mid-career individuals to initially enter the military at a higher-than-normal rank. Currently, this authority is legally limited to health-care providers, lawyers, and chaplains. The statute also prohibits original officer appointments above the grade of O-4 (major in the Air Force/Army/Marine Corps, lieutenant commander for Navy). Section 504 of the Senate bill would remove some restrictions on this authority and also would allow the military to direct appoint officers in some specialties to the grade of O-6 (colonel or captain). Lateral entry is one way for the military to quickly fill gaps in growing career fields like cyber security and intelligence.

Several other important Force of the Future proposals are also addressed in the Senate’s bill, including numerous civilian personnel reforms and new ways to better support military families. Particularly noteworthy is section 622, which would give military families the flexibility to schedule a required relocation around dependent schooling or spousal employment timetables. This authority would offer children the opportunity to complete a full school year in one location and would let spouses stay in a job for a longer period of time before relocating to their new military duty station.

The House passed-version of the 2017 NDAA does not include Force of the Future reform language to the same extent as the Senate bill.

The Senate’s military personnel policy proposals seem to be mostly supported by the administration. In a lengthy Statement of Administration Policy (SAP) on the Senate’s NDAA, the administration only commented on three sections of the bill that relate to Force of the Future; section 532, section 1103, and section 1106. The administration objects to Section 532 of the bill, because it provides only six weeks of parental leave following the birth or adoption of a child. Previously, Secretary Carter had announced a Department of Defense policy granting 12 weeks of parental leave. The administration actually supported section 1103 and 1106, which grant more latitude in hiring recent college graduates and other temporary civilian employees, saying in the SAP “we urge the Congress to broaden these provisions.”

BPC’s Task Force on Defense Personnel believes the foundation of U.S. military strength is derived from those who serve, both in and out of uniform. The task force will be watching with great interest as the House and Senate negotiate the final version of the NDAA. Obviously, the Senate’s version of the bill is only half of the equation. The other half, the House-passed version of the 2017 NDAA, does not include Force of the Future reform language to the same extent as the Senate bill, but does include some important provisions related to civilian personnel management and streamlined military recruiting. The final outcome will not be known until the conference committee concludes their work and the final bill is passed by both houses of Congress and signed by the president.

So far, this year’s NDAA action shows much promise and indicates a renewed interest in making the necessary reforms to improve the way the U.S. military recruits, retains, and manages the dedicated men and women who volunteer to defend the nation. 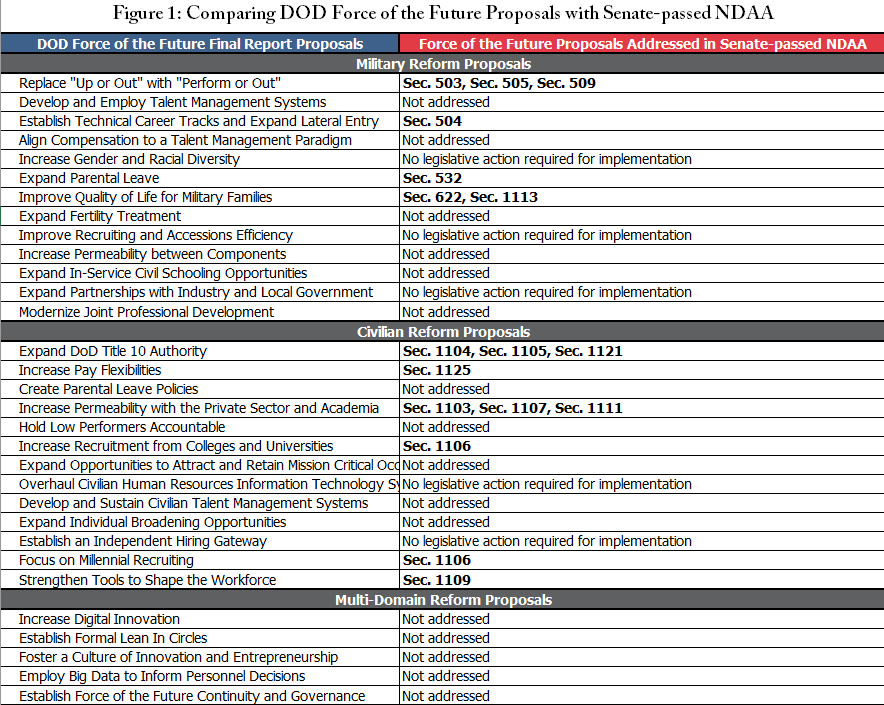