While the first part of this series discussed the 22 members of the Smart Cities Collaborative, and the 78 applicants to DOT’s Smart City Challenge, these lists belie the extent of the nation’s enthusiasm for smart cities. According to a recent survey by the National League of Cities, 66 percent of cities have invested in some sort of smart technology?be it street sensors, drones, or ridesharing innovations. Places like Boston, Las Vegas, Kansas City, and Chicago are all taking advantage of smart solutions to address transportation, sanitation, connectivity, and safety issues in their communities. Here we explore how five cities?Columbus, OH; Pittsburgh, PA; Denver, CO; San Francisco, CA; and Dallas, TX?are implementing smart technology in innovative ways.

The City of Columbus, in its ultimately successful bid to the Department of Transportation’s (DOT) Smart City Challenge, laid out a detailed strategy with five central goals: 1.) better connect citizens to human services; 2.) encourage greater use of sustainable transportation; 3.) improve access to jobs; 4.) reduce freight truck congestion using smart logistics; and 5.) provide real-time traffic information to improve commuter mobility. A critical piece of Columbus’ initiative was the establishment of the Smart Columbus Acceleration Fund, with a goal of $1 billion in private and public committed investments. An initial $90 million investment came from more than 60 regional CEOs, intended to support research, employment opportunities, and expansion of the city’s sharing economy.

With the $50 million grant from the DOT competition, Columbus is funding nine projects that further their goals. Currently, the projects are being validated by the Smart Columbus team with deployment set to be in 2019 and 2020. A look at two of these projects reveals how Columbus plans to step up as the winner of the Smart City Challenge.

One of the city’s projects aims to provide a connected platform to improve resident and visitor mobility. It involves creating an integrated “multimodal trip planning/common payment system application” to make it easier for commuters to take advantage of the sharing economy. Cities often have several different transportation apps, including a variety for parking and public transit. By creating a single app that allows residents to pay for all modes of transportation, Columbus will greatly improve access to available options and thus boost mobility around the city. While cities like Washington, D.C., issue payment cards that work for both the metro and buses around the city, Columbus plans to take things a step further. Its app will facilitate mobile payments and integrate various transportation services?like public transit, parking, bike-sharing, car-sharing, and ride-hailing services?all in one system, like the app Citymapper. This will allow Columbus residents and visitors to plan the most effective route to save time and money.

Another Columbus project strives to improve freight transportation to reduce traffic congestion and vehicle emissions. As the country’s tenth most active logistics hub, Columbus lists “freight-induced congestion and queuing” as a major challenge for the region. The city plans to develop a truck platooning system that allows two or more semi-autonomous freight trucks to communicate in real time so they can closely follow one another, resulting in saved fuel, increased vehicle safety, and improved traffic flow. Columbus is partnering with Peloton and plans to use the Alum Creek Corridor, a major roadway near the Rickenbacker Inland Port logistics hub, for project deployment. The city estimates that testing will begin in 2019. Columbus’ willingness to experiment with innovative technologies and partner with the private sector helped this smart city stand out from the rest.

Pittsburgh has arguably been a smart city since long before DOT announced its Smart City Challenge. For one, Carnegie Mellon University has been testing and deploying autonomous vehicles since the 1980s. In addition, the university’s close partnerships with the City of Pittsburgh and Allegheny County have fostered the growth of innovative technologies in transportation, robotics, and clean energy that have encouraged further start-ups and private investment. Given the city’s history of cross-sector collaboration, it’s not surprising that Pittsburgh is continuing to design, create, and implement smart technology despite not winning the Smart City Challenge.

In its Smart City application, Pittsburgh outlined plans to use smart technology to “improve safety, enhance mobility, address climate change, and enhance ladders of opportunity.” Part of this approach involved expanding Surtrac, the city’s system of smart traffic lights that adapt to changing traffic patterns and reduce travel times. Prior to the Smart City Challenge, Surtrac was installed in 50 intersections across the city. In its application, Pittsburgh identified seven “Smart Spines,” or key traffic corridors where installation of Surtrac would significantly improve mobility and safety. Analysis of Surtrac indicates that the system reduced aggregate waiting time at intersections by 40 percent, which helped decrease vehicle emissions by 21 percent. Even though Pittsburgh didn’t win the competition, DOT awarded the city around $11 million to implement its Surtrac expansion to include 150 additional intersections across the city by 2019-2020.

For Denver, the Smart City Challenge was an opportunity to explore innovative solutions to modernize its aging infrastructure, reduce traffic congestion, and improve air quality. In its application, Denver specifically outlined plans to increase public and private electric vehicle use, install pedestrian detection systems at intersections to improve safety, and establish a connected freight system where trucks can communicate with each other to coordinate delivery routes and reduce congestion. DOT awarded Denver $6 million to fund the connected vehicle network and pedestrian detection system. Denver aims to match this grant with city funds over the next four years to purchase as many as 1,500 connected electric city vehicles and install pedestrian sensors at intersections.

Soon after the DOT competition jumpstarted Denver’s smart city efforts, Panasonic partnered with the city in 2017 to begin plans for a “transit-oriented, mixed-use development” called Peña Station NEXT. The site will include office, retail, dining, outdoor, and residential space with the goal of becoming an energy self-sufficient community. This smart city within a city will serve as a testing ground for new technologies such as WiFi-enabled smart lighting, electric vehicle charging, and renewable energies. In addition, an autonomous vehicles firm called Easy Mile will add shared mobility to the project by deploying an electric autonomous shuttle service. Expected to be completed by 2026, Peña Station NEXT is just one example of how Denver is making a name for itself as a smart city.

As a finalist in the Smart City Challenge, San Francisco received $11 million to implement projects aimed at reducing transit travel time, emergency vehicle response time, and traffic crashes. The city will use these funds to conduct research on six projects ranging from smart traffic signals to deploying autonomous shuttle buses serving intra-island trips on Treasure Island. The University of California-Berkeley is partnering with the San Francisco County Transportation Authority to roll out these test projects.

With more than half of all trips in San Francisco made using public transit, city leaders have selected transportation as the focal point of their plans. Specifically, the city has announced the following 10 percent “shifts” in its goals:

To reach these goals, the city has created roles within city government to foster innovation. Specifically, the city hired its first Chief Data Officer (CDO) in response to citizens wanting clear data privacy rules. The CDO strives to strike a delicate balance between protecting resident’s privacy rights and concerns, and the need for data to fuel smart city policy and pilot programs. The city is focused on stakeholder engagement and encourages residents to submit proposals to the Mayor’s Office of Civic Innovation, an office, created in 2012. Having a centralized hub allows resources and collaboration to meet the city’s aspirations of becoming a smart city.

San Francisco has used some of its DOT funds for its SFpark project which uses wireless sensors to create smarter parking management through demand-responsive pricing. Installed in 8,200 on-street spaces in the piloted areas, the sensors can adjust prices in real time depending on the number of spaces available. This feedback is sent to app-users who can easily locate the closest available parking spot. SFpark has helped reduce traffic miles and greenhouse gas emission by 30 percent in the areas where the pilot was launched. San Francisco plans to expand SFpark to other areas in the city. 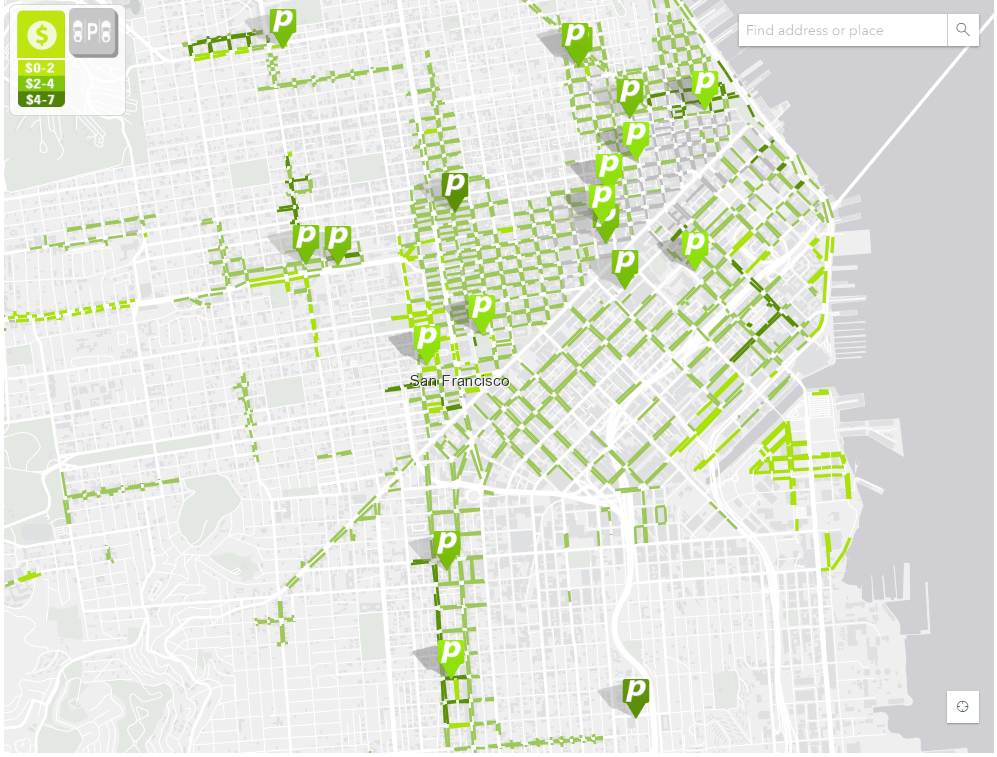 Dallas took a different approach in its steps toward becoming a smart city. Unlike the previously mentioned cities, Dallas did not apply to the Smart City Challenge. Instead, Dallas adopted smart technology with help from the private sector. On September 14, 2015, the White House Office of Science and Technology hosted an event at which Dallas launched the formation of its Dallas Innovation Alliance (DIA) to kick-off smart cities week. DIA is a public-private partnership composed of stakeholders from the Dallas-region who are interested in turning Dallas into a smart city. While AT&T is the predominant partner (since it selected to launch its smart city initiative in Dallas), other stakeholders like Microsoft, IBM, and area universities are providing input to the city’s “living lab.” This lab serves as the partnership’s testing ground for smart technology and is located in Dallas’ West End.

Columbus, Pittsburgh, Denver, San Francisco, and Dallas are just a few examples of how cities are utilizing smart technology to find innovative solutions to some of their most pressing urban challenges. These five cities demonstrate that there isn’t a single blueprint for developing a smart city. While some cities utilized resources from preexisting innovative districts, others received financial support through federal policies, like the Smart City Challenge, or from the private sector to infuse ideas and capital into smart technology. Having a variety of public and private carrot policy options to receive funding, expertise, and resources therefore provides cities with a slew of opportunities to invest in smart technology. Doing so can provide municipalities with the means to address issues impacting large segments of the country.

The Future of Cities Looks Smart

Dockless Bikes and Scooters: The Rise of Micro-Mobility