Just as one swallow doth not a summer make, one session does not a make a Congress. Yet if the first session of the 112th Congress is any precursor of things to come, we are in for more deadline-defying crises, followed by more death-defying escapes surrounded by gridlock as usual on almost everything else. That doesn’t bode well for the already tanked reputation of Congress or the outlook for incumbents of either party in the fall elections. The voters really are fed-up with Washington and itching to show it. Whether they will actually take it out on their own beloved incumbent Members of Congress, who aren’t really as bad as all the rest, remains to be seen.

The Washington Post recently ran a chart tracing the number of “measures passed” by the House and Senate in the first sessions of Congress dating back to the notorious “do nothing Eightieth Congress” in 1947-48. The point being made was that the current Congress is even worse than President Truman’s favorite punching bag in his 1948 campaign for the presidency. The comparison is a bit unfair for a variety of reasons. First and foremost, the 80th Congress was actually a fairly productive Congress, enacting such landmark laws a the National Security Act of 1947 that consolidated the military branches in the Department of Defense and created the CIA and NSC, approving the Marshall Plan for reconstructing Europe, and providing assistance to Greece and Turkey to stave off communism.

Other things overlooked in trying to compare the productivity of Congress over time are how many bills were so bite-sized in earlier times, dealing with very discreet matters, and how the bills today have become voluminous by consolidating numerous disparate items into a single bill.  Whereas in the 1950s the number of public laws per Congress averaged around 900, 2.5 pages in length, by the 1990s, the number of public laws shrank to around 400 per Congress, averaging 19.1 pages each.  So measuring the productivity of Congress by the number of bills passed or enacted is not a helpful gauge.  It may still be comparing oranges to oranges, but Congress is producing fewer, and they’ve grown much bigger in size.

The more meaningful comparisons are between Congresses of recent times.  Even by that measure, this Congress is faring poorly.  Not only did the first session fail to adopt the annual budget resolution required by law, but it failed to enact any of the 12 annual appropriations bill separately or on time.  Instead, we’ve had just two money bills to see us through this fiscal year: a three-bill mini-bus appropriations measure, and a nine bill maxi-bus.  Other programs overdue for reauthorization have been put on short-term extensions given the difficulty of finding consensus on substantive policy changes in this divided party government.  To its credit Congress did enact full year authorizations for the Defense Department and intelligence community.  But so far it has failed in other areas like education, transportation, and foreign affairs.

House Democratic Whip Steny Hoyer (D-Md.) has derided the current Congress for its sparse schedule separated by frequent “district work periods.” However, if one looks at the time in session, the House and Senate have worked roughly as many days as the first session of the previous Congress under the Democrats, though not as many hours.

One of the reasons fewer bills have passed the House in the current Congress may be the Republican majority’s attempt to be more open in the amendment process.  The new majority had a number of wide-open amendment rounds in the early part of the first session that consumed considerable amounts of time.  And, when that was continued on the appropriations bills, they only managed to pass four of the 12 regular money bills before the August recess (when they were bogged down on amendments to a fifth bill?Interior Appropriations).

The open amendment process on the money bills they did get to, combined with the number of amendments allowed under structured amendment rules in the House, account for the big jump in the number of “recorded votes” taken in the House (i.e., votes on amendments in the Committee of the Whole)?from 452 in the first session of the previous Congress to 670 in the current Congress?a 48 percent increase.

Republicans are not particularly upset that they have processed fewer bills than their predecessors.  They will be the first to tell you they are not interested in setting new records for public laws, but rather are more intent on the shrinking of the size and cost of government through the appropriations process.  Nevertheless, House Republicans will make the time-honored complaint of majorities of both parties that the Senate is to blame for sitting on so many worthwhile House-passed bills.

A closer look at first session data from the current Congress reveals that while the House has sent the Senate 197 bills and resolutions, the Senate has passed just 69 (35%) of them.  Meantime, of 65 Senate measures sent to the House, only 25 (38%) have been passed by the House.   One can at least conclude that statistically the two houses are treating each other with roughly the same degree of mutual disregard.

Certainly the division in party control between the two houses has a lot to do with current problems, though House Democrats had similar criticisms in the previous Congress of their Democratic counterparts in the Senate.  In the first session of the 111th Congress, House Democrats sent the Senate 398 bill and joint resolutions, of which the Senate only passed 105 (26%), while the Senate sent 71 measures to the House, of which 39 (55%) were passed.

The issue of divided party control within Congress and/or between the executive and legislative branches is bound to affect Congress’ work load and output.  If we go back to the early to mid-nineties, we witnessed a variety of party combinations.  President George H.W. Bush “enjoyed” Democratic Congresses for his entire four years.  Nevertheless, as Table 2 below reveals, Congress had a relatively high output of bills reported, passed and enacted under Bush in the first session of his last two years.  Even though Bush’s successor, Bill Clinton, also enjoyed a Democratic Congress, the legislative output of Congress during his first year as president was considerably less than that of is Republican predecessor.

When Republicans gained control of Congress in 1995, not only did the legislative output of committees and the floor drop considerably, but the number of laws enacted in the first session dropped precipitously, from 210 down to 88, and the number of vetoes shot up from 0 to 10.  By the first session of the 105th Congress in 1997, relations had begun to improve with more bills reported, passed and enacted, and fewer vetoes.

The data at least suggest that the parties in both branches gradually adapt to each other and develop a sufficiently good working relationship to become partners in lawmaking.  However, some speculate that the parties have become too polarized in recent years to achieve such an accommodation.  Contrary to conventional wisdom, second sessions, during election years, are not overly cautious and unproductive.  While they do tend to meet fewer days and fewer hours, their legislative output is comparable, and in some cases greater, than the first session.  In the 110th Congress for instance, the number of bills enacted in the second session was up 106 percent from the first session (from 125 to 258).  This is partially because work had begun on many of the bills during the first session.  But Members are also putting more pressure on their leaders in an election year to schedule more legislation that will please their constituencies.  Credit claiming is alive and well in Congress and is one reason incumbents continue to have an edge, even when the Congress as a whole is suffering miserably in public esteem. 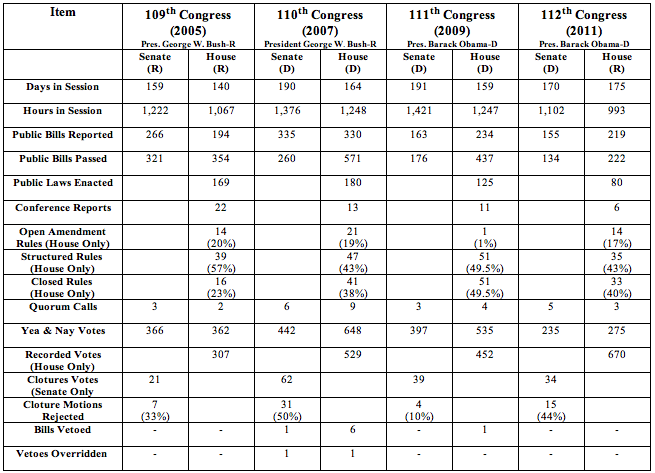 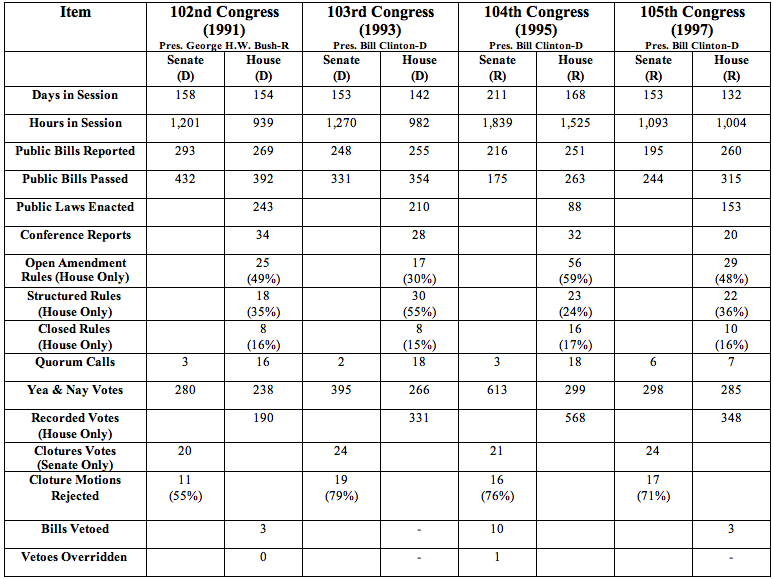 4289
Contrary to conventional wisdom, second sessions, during election years, are not overly cautious and unproductive