While dozens of immigration-related bills have been introduced by members on both sides of Capitol Hill as the 114th Congress reaches its first 100 days, most of the work remains at the committee level and no legislation has reached the floor. As of April 13, nearly 80 immigration bills have been introduced, of which only five have been voted out of committee ? all of those in the House. Nearly three-quarters of the bills consist of legislation addressing border security and enforcement (52 percent), and rolling back President Obama’s executive actions (20 percent). The other bills include proposals affecting the resident unauthorized population, illegal immigration, and reforms to the legal immigration system (mostly high-skilled, employment based immigration). Below is a discussion about the major trends in immigration legislation this year and a list of all bills introduced and passed through committee.

After the unaccompanied child migrant crisis of last summer and President Obama’s executive actions in November, it is not surprising that House leadership sought to make the issue of border security an early priority. As mentioned, the majority of immigration-related bills introduced this year have addressed border security and enforcement (Table 1). Indeed all five pieces of legislation that have made it through committee (summarized below) have addressed either border security or interior enforcement issues. The bills have mostly focused on resources and infrastructure at the border, preventing unauthorized migration, strengthening interior enforcement practices, and the treatment and processing of apprehended unaccompanied children. 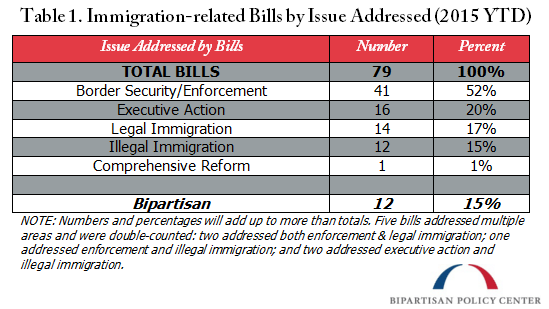 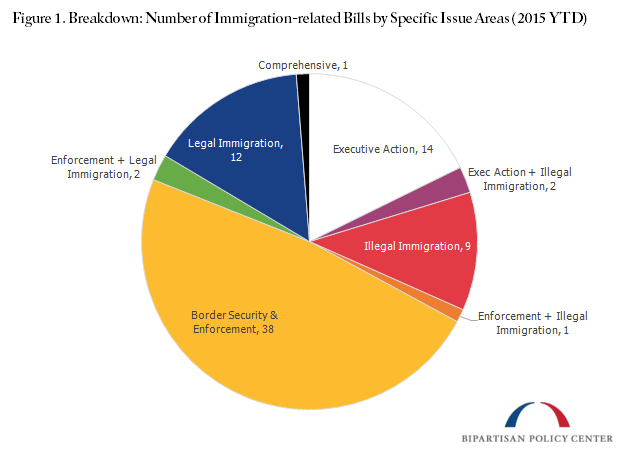 House Homeland Security Committee Chairman Mike McCaul’s Secure Our Borders First Act of 2015 received the most attention and was touted as a potential vehicle for House leadership to pass a border security bill early on. The bill was an update to a similar border bill McCaul introduced in the last congress, which passed unanimously in the Homeland Security Committee. This year’s version of the bill goes significantly further, adding specific infrastructure and personnel requirements in Border Patrol sectors, establishing a commission to review the state of border security, and requiring the prevention of all unlawful entry. After being reported out of the Homeland Security Committee on a party line vote, the bill was put on the House calendar. However, after failing to garner support from conservatives who thought the bill did not do enough on interior enforcement and would pave the way for broader immigration reform, GOP leadership delayed a vote and pulled the bill from the floor.1 Although further action on the bill has been unclear, House Majority Leader Kevin McCarthy told reporters this week that he intends to bring it up again.

In the House, similar bills were introduced by bipartisan groups of members. Rep. Jason Chaffetz (R-UT) introduced the Fairness for High-Skilled Immigrants Act of 2015, along with 12 Republican and 7 Democratic co-sponsors. The bill, which actually passed in the House in 2011 with overwhelming bipartisan support, would eliminate the per-county quota on employment-based green cards. Reps. Jared Polis (D-CO), Mark Amodei (R-NV) and four other Republican and Democratic congressmen also reintroduced the American Entrepreneurship and Investment Act of 2015, which makes the EB-5 immigrant investor program permanent. Other bipartisan bills in the House, like the Jolt Act and the Promoting Tourism to Enhance Our Economy Act, aim at facilitating travel and tourism to the United States and updating and expanding the Visa Waiver Program.

Most discussion on immigration so far this Congress has remained at the committee level. The Senate and House Judiciary and Homeland Security Committees have held several hearings, as has the House Oversight and Government Reform Committee. Several of the committee hearings have focused on the president’s executive actions, analyzing the legality of the actions and their implications for the country.

Perhaps some of the most substantive and comprehensive hearings have occurred in the Senate Homeland Security and Governmental Affairs Committee, chaired by Sen. Ron Johnson (R-WI). Between March 17 and 26, the committee held a series of hearings on addressing the current unauthorized population and future flows, the root causes of Central American migration to the United States, transnational crime, and securing the southwest border.

The House Homeland Security and Judiciary Committees have been responsible for the five pieces of legislation that have seen movement. In addition to the border bill passed by the Homeland Security Committee, the Judiciary Committee, led by Chairman Bob Goodlatte (R-VA), took up several bills that had been passed through his committee in the previous congress, including the Legal Workforce Act, which relates to electronic employment verification, and a renamed version of the Safe Act, which deals with interior enforcement. The bills, which all passed on a party line vote, are listed and summarized below.

2 Under the TVPRA, DHS screens children from contiguous countries (Mexico/Canada) within 48 hours of apprehension to determine if the child is a victim of trafficking or has a claim to asylum based on fear of persecution. If the child does not meet that criteria, they are eligible to agree to a voluntary return and speedy repatriation to Mexico. On the other hand, UAC from non-contiguous countries must be transferred to ORR within 72 hours of apprehension and are guaranteed an immigration court hearing. Read more here.