The Tribal Energy Loan Guarantee Program was first funded in Fiscal Year (FY) 2017, launching its first solicitation on July 17, 2018. TELGP partial loan guarantees complement private investment with federal support to mitigate the credit risk of inaugural development on tribal lands and leverage the significant energy potential available in these regions. According to a report issued by DOE’s Office of Indian Energy, tribal lands contain five percent of all potential U.S. renewable energy sources, including 5.1 percent of all solar generation potential, 3.4 percent of all wind generation potential, and 2.9 percent of all hydropower generation potential. Tribes or tribal-owned entities can apply for projects in the areas of fossil energy production, mining, renewable energy development, construction of transmission infrastructure and energy storage facilities, and more. TELGP can issue up to $2 billion in partial loan guarantees and guarantee up to 90 percent of the debt provided by a commercial lender. 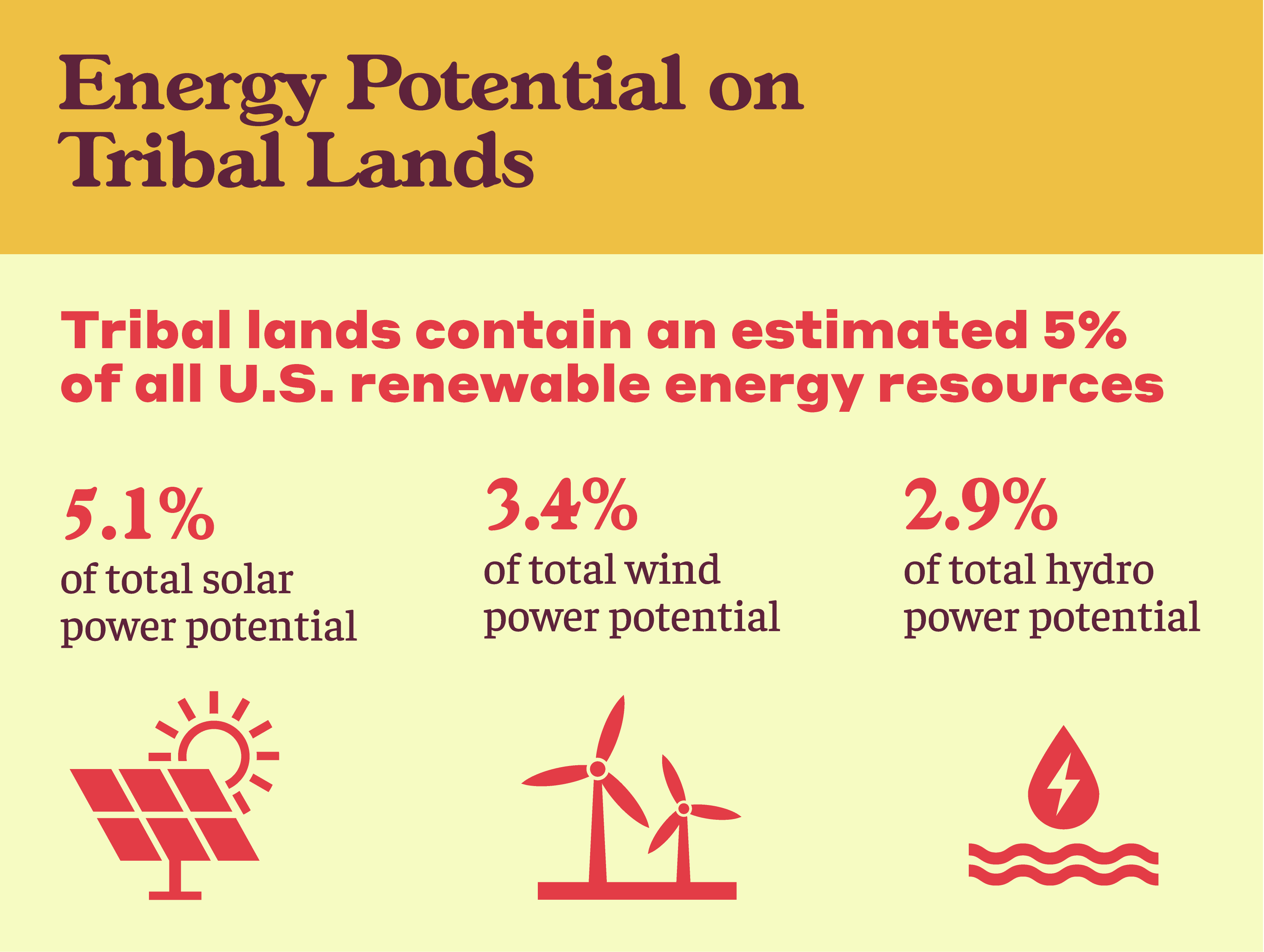 The Advanced Technology Vehicles Manufacturing Loan Program was born out of the Energy Independence and Security Act of 2007 to support domestic production of fuel-efficient, advanced technology vehicles and vehicle parts. ATVM’s loans have empowered private manufacturers to pursue more technologically-advanced projects. ATVM loan recipients have produced more than 4 million advanced technology vehicles in facilities across the country. Ford, Nissan, and Tesla have leveraged their ATVM loans to expand or establish their manufacturing facilities for electric vehicles and engine efficiency innovation.

LPO programs require a two-part application process in which LPO determines an applicant’s eligibility and the technical/commercial feasibility of the project. Due to the technological risk of Title XVII projects, the program’s authorizing terms direct LPO to collect application fees to cover LPO’s due diligence of the project’s feasibility. Title XVII applicants pay around $400,000 in application fees if invited to both rounds of the selection process. For ATVM applicants, however, all application costs are covered with appropriations from the Consolidated Security, Disaster Assistance, and Continuing Appropriations Act of 2009. TELGP’s authorizing legislation does not establish any application fees for the program. Upon successful completion of LPO’s due diligence, select applicants engage with LPO to negotiate the terms of a loan agreement. Applicants are then offered a conditional commitment for LPO financing, provided that the applicants meet a set of agreed upon terms. If applicants successfully meet these conditions, they are then issued the loan or loan guarantee.

LPO was first appropriated administrative funding to carry out the loan authority of the Title XVII program in FY2007. Under the American Recovery and Reinvestment Act of 2009 (ARRA), LPO was appropriated additional loan authority to carry out a series of projects strictly in the area of commercially-ready renewable energy before the end of FY2011, known as the 1705 Program. The ARRA also included additional support for the ATVM program, seeking to support the automakers on the brink of bankruptcy. Now, LPO has active appropriations authorizations for the full scope of Title XVII energy projects, ATVM, and TELGP. LPO possesses a total of approximately $40 billion in existing loan authority spread across these programs. According to the Energy Futures Initiative’s recent report on LPO, this remaining loan authority “could leverage as much as $100 billion of investments in innovative approaches to modernizing energy infrastructures across all energy sectors.”

To administer its programs and provide reviews of applications and loans, LPO receives annual administrative appropriations, which the office offsets through the collection of application fees. According to past DOE budget totals, LPO operates its three programs with an average of $40 million in administrative funding each year. As a part of the annual federal budget process, the Trump Administration submitted a budget request that excluded administrative funding for all three loan programs in FY2018, FY2019, and FY2020. Despite these requests, Congress voted to fully fund all three programs for the past three fiscal years (FY2017, FY2018, and FY2019). However, even if Congress votes to suspend administrative funding to LPO in the future, the office’s remaining loan authority could not be recouped without an additional congressional action. The program’s recent funding history suggests that both its administrative appropriations and lending authority have maintained sufficient bipartisan congressional support to ensure its mission can continue.

Once LPO’s remaining loan authority is issued, the office will close unless another bill is passed to reauthorize its programs and appropriate additional funds. LPO does not possess a self-sustaining funding pool.

The average debt-to-equity ratio for an LPO project is 65 to 35 percent. That is, loan applicants invest 35 percent private capital into a project and cover the remaining through public debt financing. Therefore, if an applicant defaults on their loan, LPO is only liable for the federally financed debt, not the entire cost of the project. Out of LPO’s 29 issued loans or loan guarantees, only five recipients have defaulted on some or all of their loan liabilities in the program’s lifetime. Notably, these losses account for less than three percent of the program’s funding to date. This loan loss ratio is substantially lower than most default rates experienced by private lenders. 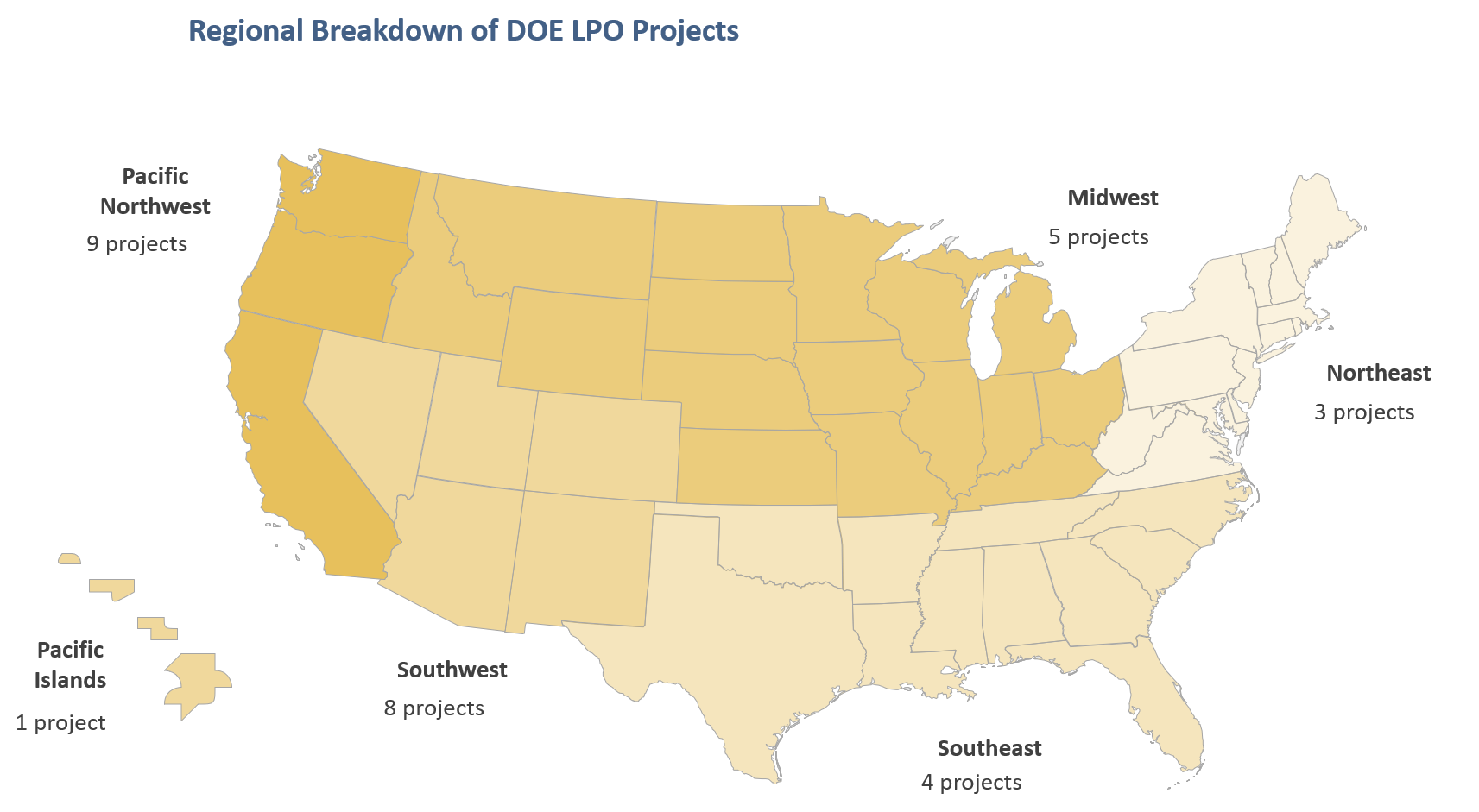 LPO projects have transformed American energy infrastructure and accelerated growth in clean energy and electric vehicle markets. According to DOE’s website, LPO projects have created or saved over 56,000 American jobs across all regions of the country and have generated over $50 billion in total project investment. Further, LPO projects have prevented 34.7 million metric tons of carbon dioxide emissions and saved 1.7 billion gallons of gasoline and counting.

LPO funding has paved the way for some of the most notable innovations in energy and vehicle technology it’s lifetime. In 2009, Tesla received an ATVM loan to build the manufacturing facility for the production of the Model S. LPO’s validation of Tesla’s potential generated further investment in the company and accelerated its eventual launch. At its ATVM-supported facilities in California, Tesla created more than 1,500 permanent U.S. jobs. An IHS Markit study estimated that in 2017, Tesla directly employed over 20,000 workers in California and generated more than $5 billion in statewide economic activity.

One of LPO’s first utility-scale solar projects, Mesquite 1 in Maricopa Country, Arizona, also introduced an innovative new inverter technology to increase the resilience of the solar panels onsite. The AE500NX inverters deployed in the project’s solar modules will help the plant operate during larger voltage variations, supporting a more reliable solar-powered electric grid. After witnessing Mesquite 1’s successful application of the new technology, a neighboring, privately-financed solar project purchased the same inverters for their own solar modules. LPO’s technical and financial support of the Mesquite 1 project played a critical role in promoting the broader adoption of the technology in solar modules at sites across the country. 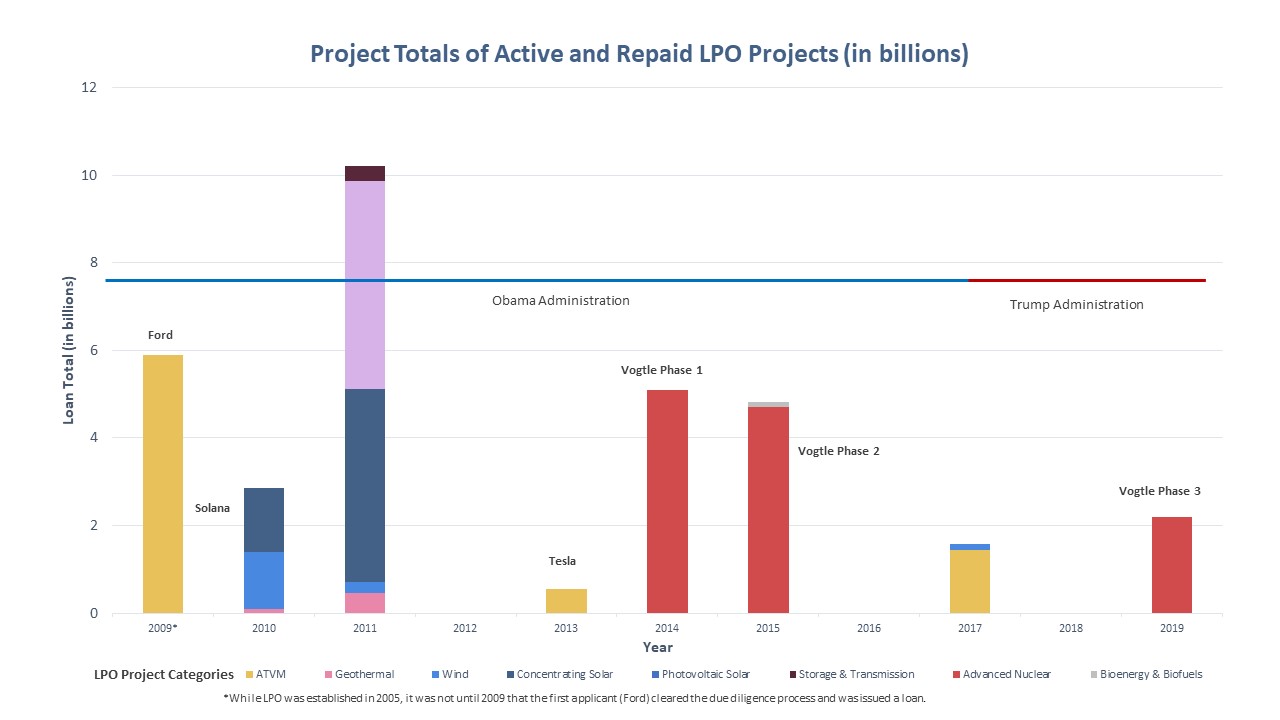 Aside from LPO’s recent approval of the additional $3.7 billion in loan guarantees to Vogtle, a nuclear reactor project in Georgia, the number of loans and loan guarantees issued by LPO has stagnated in recent years. Most of this stagnation is likely due to the restructuring LPO has experienced in recent years and changing market conditions. When the funding authority from the American Recovery and Reinvestment Act of 2009 expired, Title XVII’s project scope reverted back to its original statute, to include advanced nuclear and advanced fossil fuel projects, as well as renewable energy projects. In the case of ATVM, private capital to produce electric vehicles and fuel efficiency components has become more commercially accessible in recent years, leaving LPO to reimagine the value proposition of the program. Then, in FY2017, TELGP began operating with administrative appropriations. While programmatic adjustments and external market forces may explain LPO’s stagnation in financing new projects, it does not come without a cost. The stagnation in the number of funded projects could affect American competitiveness in energy innovation as other global powerhouses increase their deployment of next-generation energy projects. According to a 2019 report from BNEF Energy, China outspends the United States on energy innovation by about $36 billion annually. For the United States to remain competitive in this space on a global scale, many experts are looking to LPO’s unused funds help to lead the way.

While LPO’s loan programs have produced highly valuable economic and environmental benefits, there is room for improvement. First, LPO could benefit from guaranteed, long-term budget and operational continuity. The Trump administration’s budget requests have included zero funding for LPO programs as an effort to reduce government spending. While Congress has consistently appropriated funding to LPO in the past several years, the office’s innovation potential would be threatened if funding was ever revoked. With wide support for the program from the private sector, Congress considered amending the program in 2011 to make it a self-sustaining fund, but an official vote on the issue never took place. This change would insulate LPO from future appropriations and authorizations battles. It would also increase applicant confidence in the longevity of LPO, potentially reducing the stagnation in the number of loans and loan guarantees issued by LPO.

Aside from the continuity of the program, reforming the scope of LPO’s lending authority is another critical reform that could help the office play a key role in the future of energy innovation. That is, as the energy sector focuses on more technical solutions to the grid reliability and climate challenges, LPO’s support of energy innovation can help fill the lending gap for these complex projects. One such example is the development of ports to support off-shore wind. While the scope of the Title XVII program covers off-shore wind development, it is uncertain if LPO could also finance a port development project, even if that project is an essential step in supporting an off-shore wind project. As infrastructure improvements become a more critical part of energy innovation and technology integration, Congress may need to rethink the scope of LPO’s lending authority for its three programs.

Further, there are opportunities to reduce the financial liabilities of both LPO and its applicants. Title XVII applicants are responsible for paying the credit subsidy cost (CSC) for their proposed project. The CSC, a calculation of the applicant’s ability to repay, can be the largest portion of the costs for Title XVII applicants. This significant financial burden may be dissuading eligible applicants from applying, minimizing the program’s potential impact. Conversely, the CSCs of ATVM applicants are wholly financed with appropriations from Congress, and Congress has also appropriated $8 million to cover the CSCs of some of the first TELGP projects. Congress could help stimulate Title XVII’s project pipeline by amending the program’s statute from a self-pay program to a subsidized program like ATVM and TELGP.

LPO has served a critical role in funding commercial-scale deployment of innovative energy projects at a stage where private investment is still not prepared to take a lead role.  The program boasts a lower default rate than the private sector and has generated far more economic value than it has lost. LPO projects have also created a diverse array of new jobs in local economies across the country and have significantly contributed to the nation’s emissions reduction goals. The program maintains strong support from members of both the private and public sectors, including legislators from both sides of the aisle. As America looks to its energy future, LPO provides a key tool to meet the changing energy needs of the country for decades to come.

This blog post has been updated. An earlier version of this post misstated the number of jobs created at ATVM-supported Tesla facilities, as well as the company’s subsequent impact on economic activity in California.