In establishing the Federal Reserve, America’s third central bank (the first two didn’t last very long), Congress created a hybrid system involving a Board of Governors based in Washington, D.C. and a system of 12 regional banks scattered across the United States. Carving out the specific regions was designed to balance factors such as size and economic activity, and with some political calculations involved. “Since then the country has changed dramatically,” Senate Banking Committee Chairman Richard Shelby (R-AL) recently noted to Federal Reserve Chair Janet Yellen when asking her about this very issue.

When first established in 1913, every Fed region contained more than 5 percent of the nation’s population, with the Chicago Federal Reserve Bank covering the largest portion of the country’s population at slightly more than 1 out of every 8 people (13 percent). 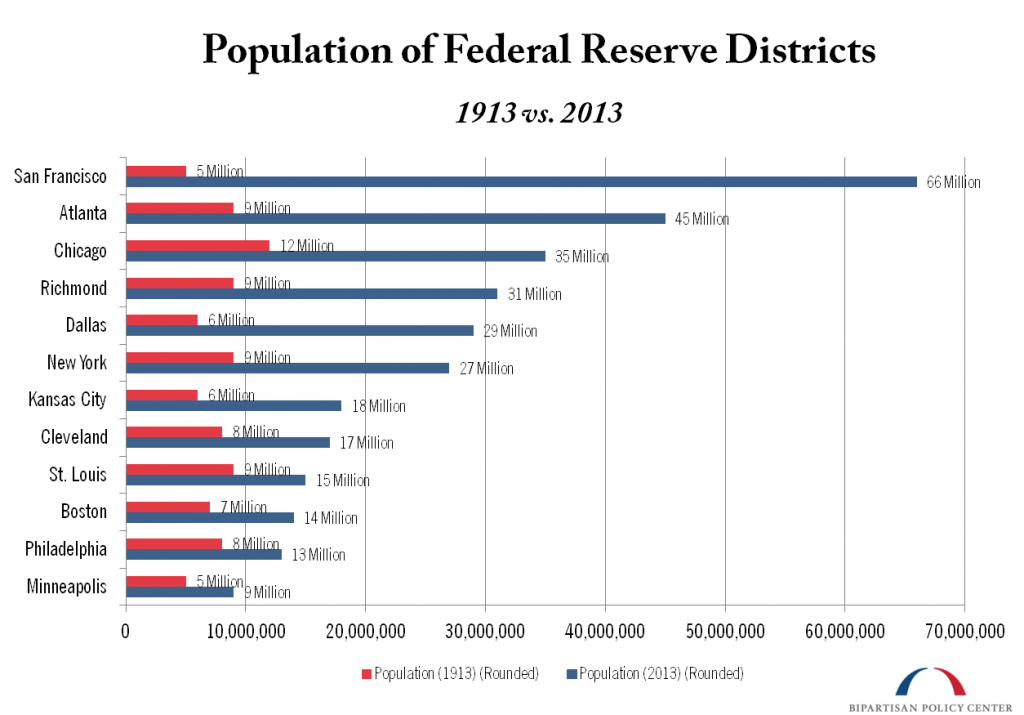 Our Founding Fathers wisely understood that population distribution is fluid and required congressional redistricting at least once every decade. However, the same cannot be applied to the outdated Fed regional bank districts because, despite population shifts, under law their number and boundaries are set in stone. As Fed Chair Yellen responded to Chairman Shelby, “If we were starting from scratch you would not have the 12th District [the San Francisco Fed] with 65 million people, I think 20 percent of the U.S. economy having one Federal Reserve Bank.”

It may be time to rethink not only their shape, but also whether more or fewer regional banks are needed, and what the governance structure of those banks should look like. These are consequential issues because regional Federal Reserve Banks make key decisions about the nation’s economic and financial future. Regional Banks drive monetary policy decisions, supervise commercial banks, and even decide whether banks can have certain types of businesses as their customers. Collectively, they are a $4 billion organization that provides valuable economic data and research while conducting real-time policymaking.

Unfortunately, too much congressional attention has been focused on proposals to weaken the Federal Reserve’s independence in setting monetary policy, such as the misguided “Audit the Fed” legislation, which passed the House of Representatives and despite not moving forward in the Senate, still received the support of a majority of U.S. senators. While it has a political constituency, this legislation is bad and dangerous policy, and has come at the expense of more thoughtful discussion of Fed reform. If Congress wants to seriously revisit the structure of the Federal Reserve, reforming the regional reserve banks is a good place to start.

What if Another Federal Reserve Board Vacancy Opens Before 2017?