What is Temporary Protected Status?

Temporary Protected Status, or TPS, is a designation by the Secretary of Homeland Security that a country receives if conditions in the country are deemed dangerous enough that an individual from that country, currently residing in the United States, would not be able to return safely, or if the country is unable to handle the return of its nationals from the United States. This can include situations such as national disasters, disease outbreaks, or civil unrest. Typically, the DHS Secretary will consult with the governments of the TPS countries, the State Department, and DHS immigration components in determining whether to grant, extend, or terminate TPS designation for any country. TPS designations can last for six, 12, or 18 months and must be re-evaluated to determine whether they should be extended or terminated by the Secretary within six months of the expiration of the current designation.

Foreign nationals granted status under TPS designation are not given permanent legal status, but are protected from removal from the United States. They can also obtain employment and travel authorization. If the TPS designation for their country is terminated, they revert to whatever immigration status (including undocumented status) they had before applying for TPS, if it is still available to them. For example, someone who was a nonimmigrant student and applied for TPS might return to student status after the termination of TPS, if they are still a student in school. If they were no longer a student, and did not have other lawful status they could apply for, then they would have to leave the country or become undocumented and risk deportation.

What changes has the Trump administration made to TPS? 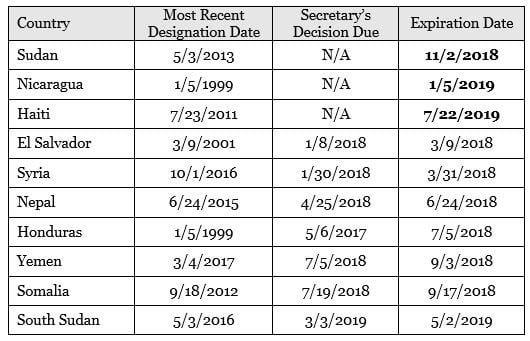 Chain Migration and DACA: An Explainer