At 3:10 AM on the morning of Friday, July 13, DC Water issued a “Boil Water” alert for roughly half of the nation’s capital.

An open valve at a pumping station caused water pressure to drop throughout the northern quadrants of the city. Since water treatment often relies on water pressure to disburse the chemicals and create a seal, when the water pressure falls below a minimum threshold a variety of possible contaminants can potentially enter the water. Although DC Water did not confirm the presence of any contaminate, residents in the affected area were advised to boil tap water or use bottled water for the next 24 to 48 hours.

For Washington, D.C., the Boil Water Advisory is expected to be lifted by the end of the weekend. And though this may be an isolated incident for the district, Boil Water Advisories are occurring across the country and are reflective of our growing infrastructure crisis.


Area Under Boil Advisory (as of July 13) 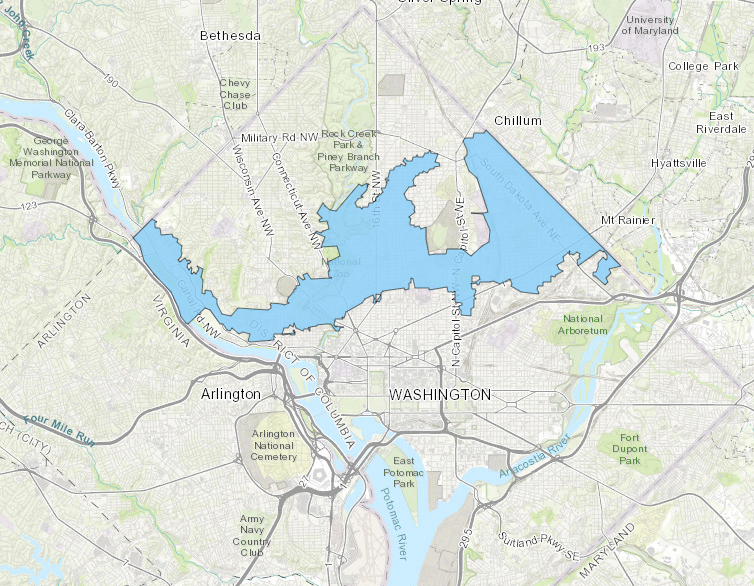 What is a Boil Water Advisory
?

A Boil Water Advisory informs residents that the water from their tap may be safe for bathing, but not for ingesting, and should be heated to a rolling boil before used for drinking or cooking. Precautionary advisories are issued when an event has occurred which could contaminate the water supply. Mandatory advisories, on the other hand, indicate that the water has tested positive for contaminants.

Even precautionary Boil Water Advisories can create a sense of public panic, as people are suddenly forced to question the safety of an infrastructure system that is often taken for granted. While being forced to boil your water is an inconvenience, it can have a much larger impact on low-income populations and larger institutions. Schools, hospitals, homeless shelters, and jails are often ill-equipped to suddenly provide safe drinking water. Non-profit groups, charities, and even Parent Teacher Associations are often required to quickly mobilize to distribute water bottles.

There are also economic implications, as businesses can be forced to close or restrict their services.

A University of Missouri study that covered three cities (Harrisburg, PA, Boston, MA, and Talladega, AL), found that nearly one-third of surveyed businesses reported losing revenue as a result of a single water disruption ? with loses ranging from $100 to $400,000. Following a water main break, each city issued a Boil Water Advisory ranging from 2.5 days to a full week.

Boil Water Advisories are occurring across the country and are reflective of our growing infrastructure crisis.

Boil advisories can also test a utility and city’s capacity for quickly and accurately providing vital information to every constituent. Alerting affected areas is the first communication hurdle. Often relying on blanketing social media and local news coverage, utilities may also conduct robocalls and go door-to-door to spread the message to as many people as possible. The second communication hurdle is in restoring the public’s trust once the boil warning is lifted. When residents lose trust in their water provider, as has been seen in Flint, MI, it can be exceptionally hard to restore faith.

An estimated 19 million Americans may become ill each year as a result of drinking contaminated water. As the Bipartisan Policy Center has previously outlined, the nation’s water infrastructure is in dire condition. In 2016, the EPA reported that 51,573 public water systems had at least one violation. Of these, 4,470 were “serious violators,” meaning the system incurred multiple violations. And deteriorating infrastructure causes an estimated 240,000 water main breaks each year, resulting in the loss of about 1.7 trillion gallons, or $2.6 billion, of treated drinking water.

One study of Boil Water Advisories in the United States, from 2012-2014, found that, of the nearly 21,000 reported notices issued over those 3 years, 99.5 percent were Boil Water Advisories, about 0.5 percent were “do not drink” notices (even if boiled), and a remaining few were “do not use” notices. Notably, the distribution of water notices was evenly spread over the period, or in other words, notices occurred at the same rate annually.

As shown in the figure below, the majority of Boil Water Advisories are issued after a water main break or leak is detected. Only 14 percent are issued due to a confirmed contamination.

Over the span of one month in 2016, Huffington Post recorded 142 boil water advisories in the United States. Most of these water advisories were found in southern states, and largely in rural regions with 72.8 percent of incidents occurring in places with less than 20,000 people. Boil Water Advisories in particularly rural areas can present unique challenges, as access to large quantities of bottled water, at an affordable rate, may be limited. 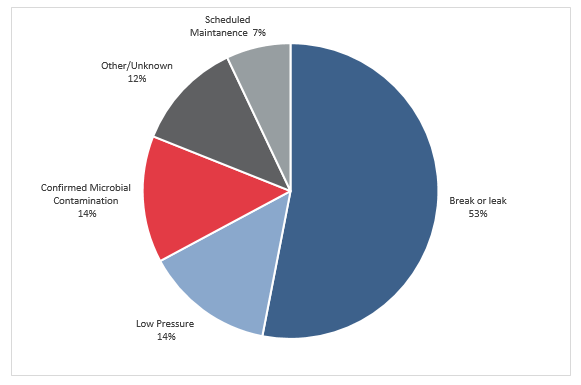 As in Washington, D.C.’s case, water systems will often issue Boil Water Advisories as a precautionary step, without evidence of any known contamination. While boil alerts can be common even for well-run systems, they can also be indicative of larger systemic problems.

The creation of DC Water itself was, in part, due to a series of health violations that occurred under the city’s previous system between 1993 and 1996 that triggered several city-wide Boil Water Advisories.

Since most advisories result from breaks and leaks, utilities that are required to repeatedly issue notices, are often also faced with a backlog of deferred maintenance needs. As New Orleans Mayor Mitch Landrieu told the Times-Picayune newspaper (following Boil Water Advisories issued during a cold snap back in January), “we have an old, tired system that hasn’t had the kind of deferred maintenance that a system requires. It breaks.”

However, in one tragic sense, a Boil Water Advisory can be the sign of well-functioning system, in that, a potential health contaminant (or the possibility of one) was identified in the first place, and cautionary action was taken. A report from the National Resource Defense Council found that some of the most prevalent water system violations is the failure to monitor for, and alert the public of a potential contamination.

DC Water’s Boil Water Advisory is expected to be lifted by the end of the weekend, but for the nation, these could become more and more common without a swell of infrastructure investment.

Can America's Infrastructure Withstand the Next Natural Disasters?