Amid a growing refugee crisis and ongoing political bickering about the proposed quota system, the European Union (EU) continues to look for a solution to what may be the biggest humanitarian crisis since World War II. At the same time, the United States has been dealing with its own Central American migrant and refugee crisis at the southern border. In November 2015, the Bipartisan Policy Center published an analysis explaining the differences between the legal frameworks of the humanitarian admission systems in the United States and the EU. This post compares the scale of the situations faced in Europe and here in America.

How many refugees are arriving?

The number of people seeking asylum in Europe nearly doubled last year compared to 2014. Germany remains the refugees’ most popular destination, but Greece, a common point of entry to the EU, has borne the brunt of the burden.

In 2015, the total number of asylum claims to the EU climbed to nearly 1.2 million and first-time applicants accounted for 95 percent of the total. The United States has been largely insulated from the record numbers of asylum seekers coming to the EU. In FY2015, the United States received 84,236 applications for asylum according to U.S. Citizenship and Immigration Services, an increase from the 56,912 asylum applications filed in FY2014. The U.S. also accepted 69,987 refugees in 2014, but even combining those numbers the total is still far fewer than the 1,118,385 refugees that applied for entry to the EU in 2015. 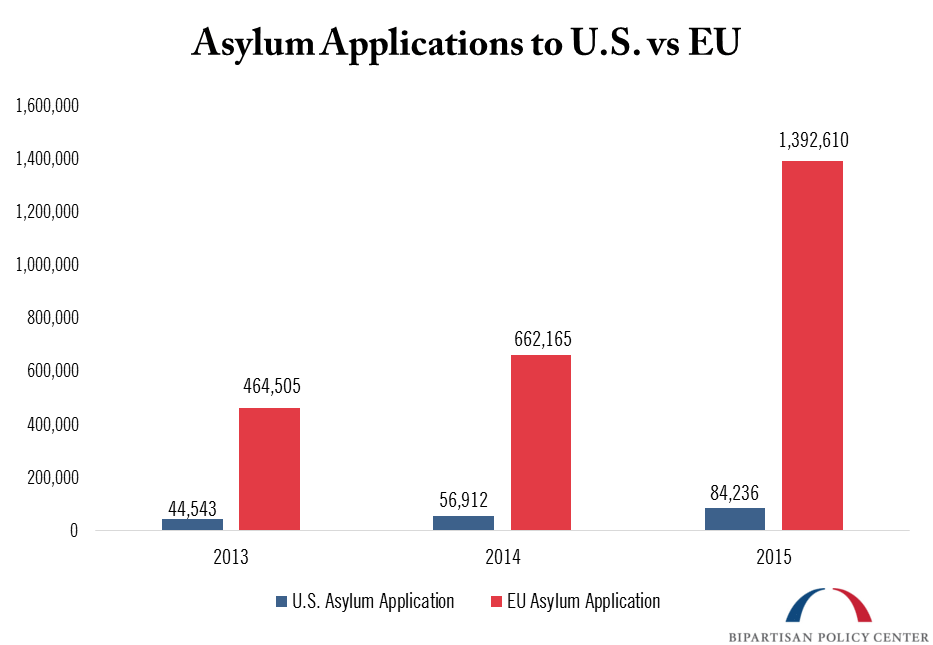 Source: U.S. data from USCIS and EU data from Eurostat

Where do they come from?

People from nearly 150 countries sought asylum in EU member states last year. While Syrian, Afghan, and Iraqi citizens represented the largest number of applicants, Syria remains the top source of refugees with nearly twice as many applicants as Afghanistan, the second largest source of migrants. 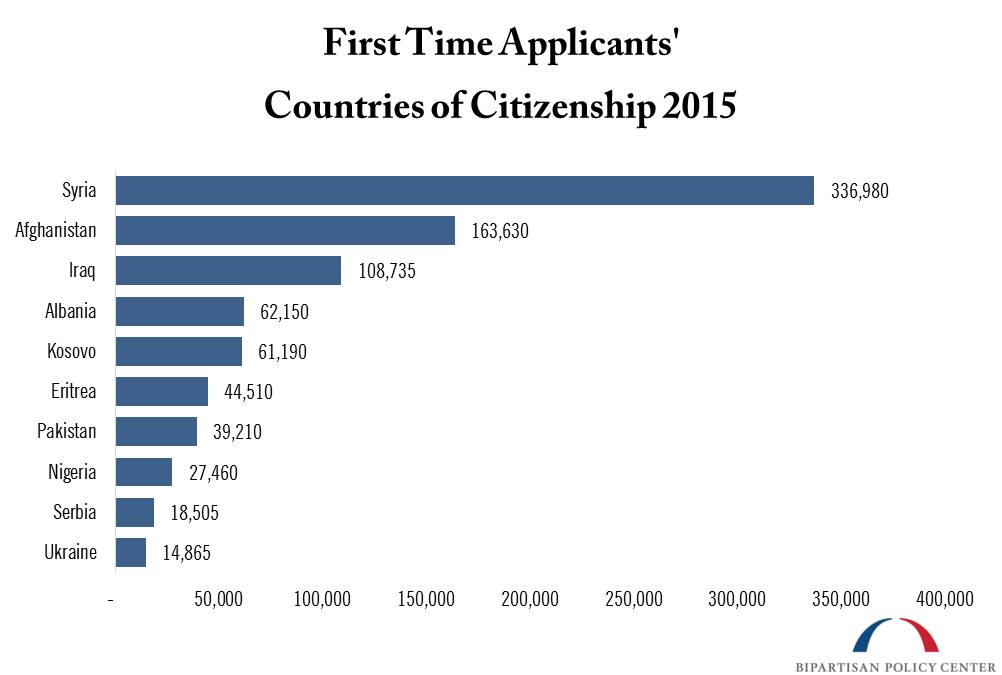 Because of geographic distance, the United States has not seen the number of migrants from the Middle East that Europe has. However, in the past few years, the United States has experienced a somewhat similar situation at the southern border, with the number of children and families arriving from Central America increasing sharply in 2014. In FY2014, 68,451 children and 68,445 family units were apprehended at the southern border, 86 percent of which were from Guatemala, El Salvador, and Honduras. In FY2015, the number of children and family arrivals decreased to 79,808, but the latest statistics released by Customs and Border Protection in February 2016 suggests that the migration flows remain unpredictable. This flow, like the Syrian and other refugee flows to Europe, overwhelmed U.S. border authorities and resulted in many families being held in warehouses and other temporary shelters until resources were brought to bear. 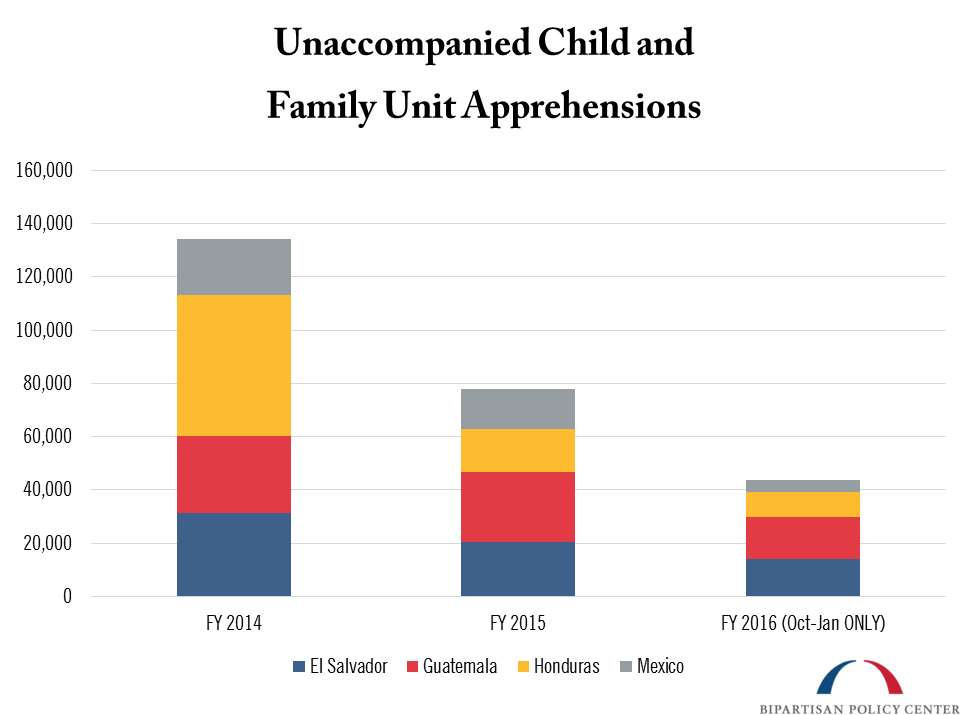 Why are they coming?

Since the first wave of Arab uprisings in 2011 and later outbreak of civil war in Syria, the number of Syrians seeking safe haven in Europe has increased from about 7,300 to nearly 337,000 in 2015. The conflict that began as a battle between supporters and opponents of Syrian President Bashar al-Assad grew into a civil war among various groups, including the Islamic State. Based on the data published by the Office of the U.N. High Commissioner for Human Rights, more than 90,000 people were killed in the conflict by mid-2013 and in 2015, the number jumped to over 250,000.

The increase in Central American migration to the United States is due to a variety of factors, including gang violence and misinformation spread by smugglers. According to U.N. Office of Drugs and Crime reports, Honduras, El Salvador, and Guatemala have been in the top ten nations for highest homicide rates worldwide. In 2014, a gang truce in El Salvador collapsed and homicides spiked 57 percent. Smugglers have also spread misinformation that child migrants would be able to stay in the United States for an indefinite period of time if they arrived by a certain date. 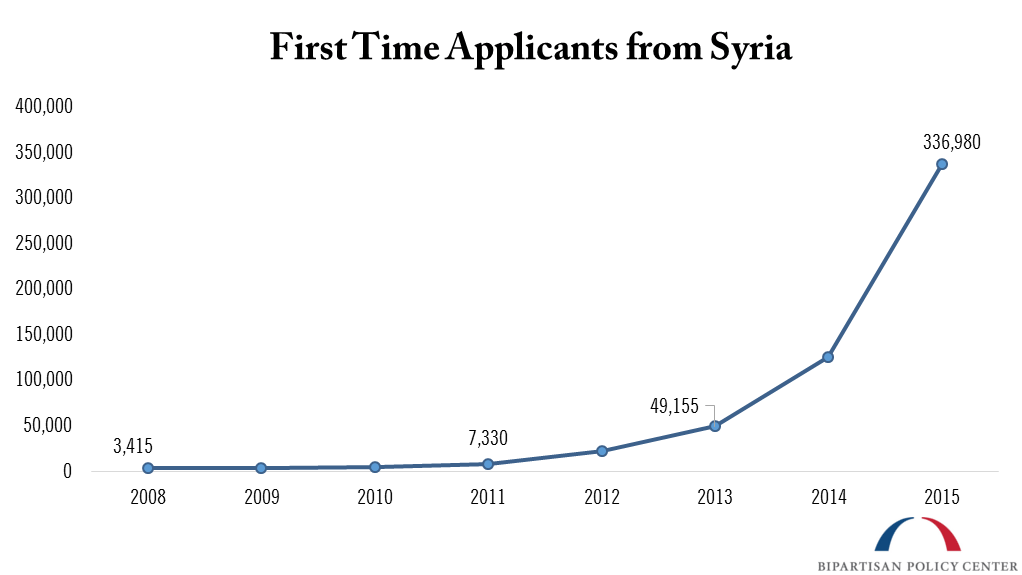 Where have they gone?

While in the U.S. unaccompanied minors are distributed throughout the country, in the EU most of the asylum seekers have been applying to stay in Germany. The number of people claiming asylum in Germany more than doubled from 2014 to 2015. By the end of 2015, Europe’s leading economy received over 476,500 applications, 2.5 times more than Hungary, the second most popular refugee destination. 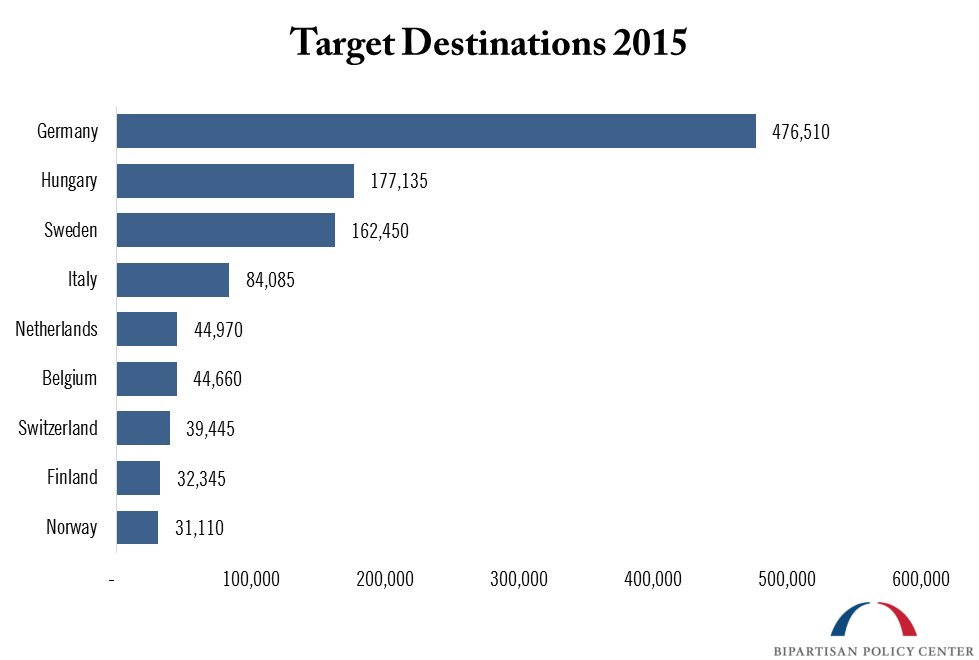 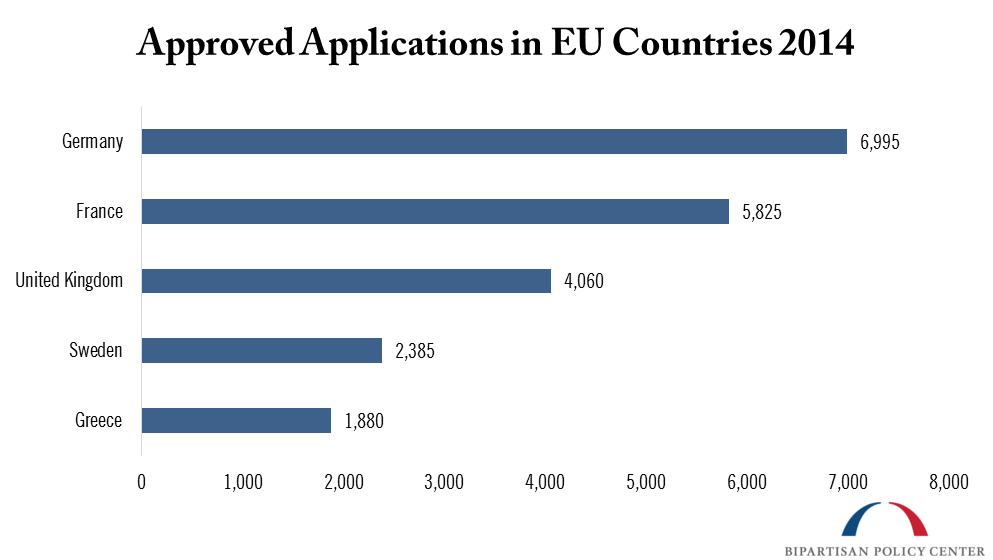 How many have been approved?

In general, the share of acceptance of asylum applications to EU countries has been lower than 20 percent in the past six years. By the end of 2014, 17 percent of applicants, or 24,500 people, were granted asylum in the EU. 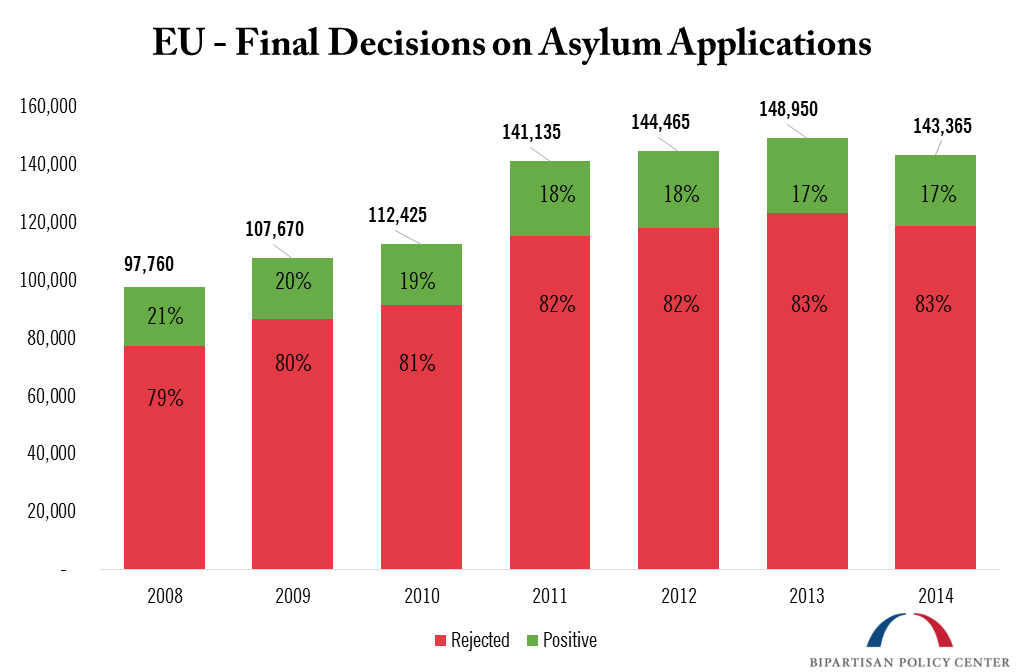 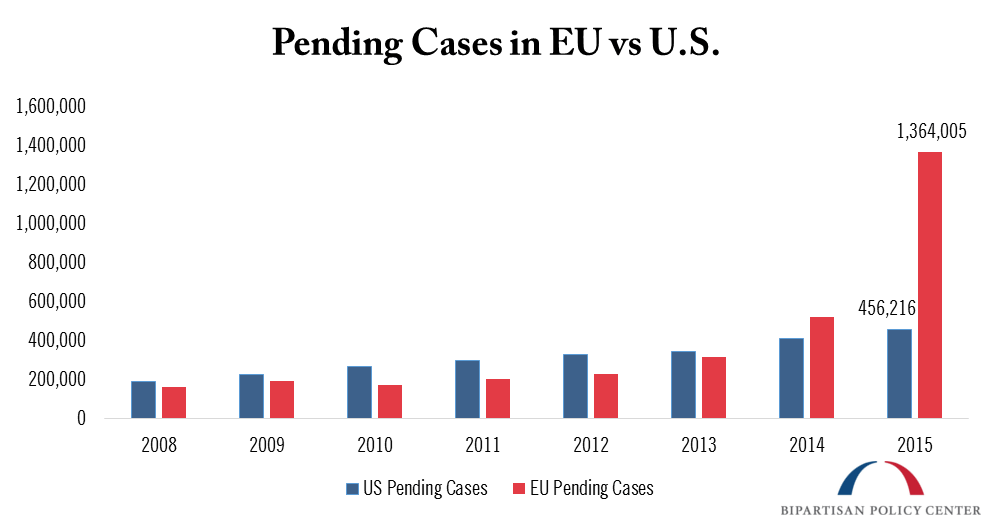 Source: U.S. data from USCIS and EU data from Eurostat

The strengthening migration flow has contributed to growing anxiety among the European public and many countries are beginning to close their borders and impose caps on the number of asylum applications they receive. While the debate is ongoing, various policy options discussed by EU member states and the international community resemble some of the steps the United States has taken to resolve the ongoing crisis with children and families from Central America. Our next post will analyze both these strategies to demonstrate the similarities and differences of the U.S. and EU approaches.

Comparing Humanitarian Admissions in the U.S. and EU