Over the last 40 years, energy productivity gains have made it possible to fuel more economic activity with less energy. Since 1970, overall U.S. economic output has more than tripled, while energy usage increased by only 43 percent.* A recently released report from the Bipartisan Policy Center’s Strategic Energy Policy Initiative (SEPI) highlights these extraordinary gains and proposes additional ways to improve the economic, security, and environmental position of the United States through the more productive use of energy.

BPC’s report, which was written under the guidance of an Energy Board consisting of experts from industry, environmental advocates, NGOs, academia, and labor, notes that the remarkable improvements in energy productivity can be attributed to two main drivers: 1) structural changes in the U.S. economy, including the shift from more energy-intensive manufacturing industries to less energy-intensive service industries; and 2) investment in energy-efficient technologies and processes.

The figure below depicts a simplified way to think about the significant improvement in U.S. energy productivity that has occurred over the past few decades. The yellow “Hypothetical Energy Consumption” line represents the energy consumption levels that would have occurred between 1970 and 2012 if energy consumption per unit of economic activity had stayed constant at 1970 levels. In other words, it illustrates how much energy would have been required to fuel the actual economic growth during this period if there had been no improvement in energy productivity after 1970.

Using this assumption, total U.S. energy demand would have increased by 147 quads between 1970 and 2012. By comparison, in 2012, actual U.S. energy consumption, shown in plum, was only 30 quads higher than in 1970. Thus, the graph shows that energy productivity improvements made up almost 117 quads, or 79 percent of the hypothetical increase in energy demand that would otherwise have been necessary since 1970 to support current levels of economic activity.** 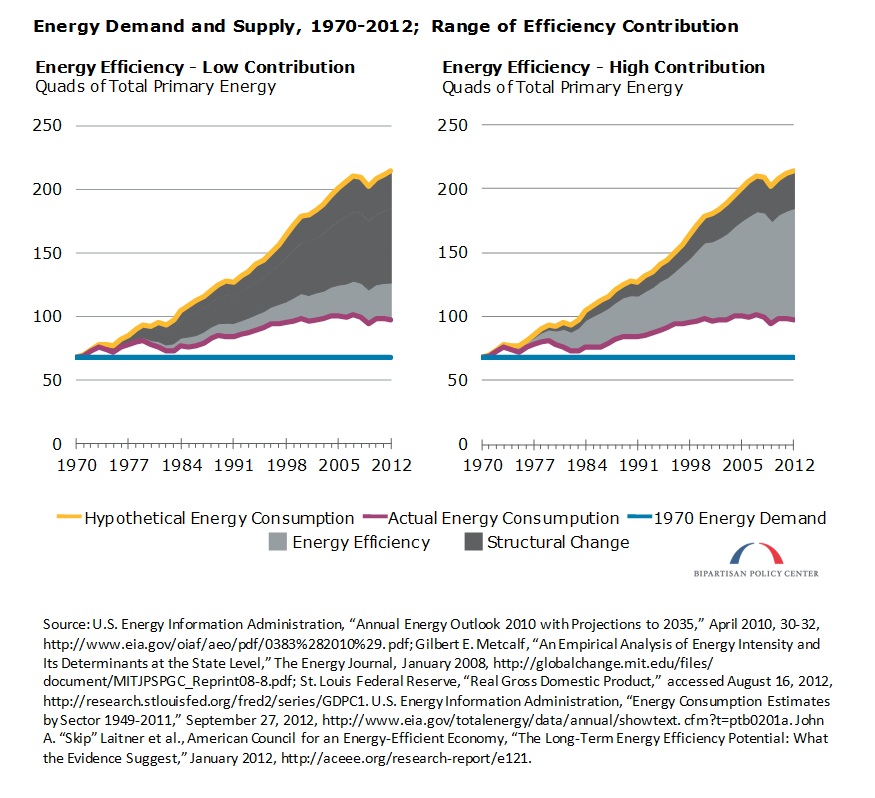 Numerous studies have looked at the relative importance of structural changes vs. efficiency improvements in explaining energy productivity trends. Separating and quantifying the impacts of these two drivers is challenging, but, overall, the literature on this topic indicates that efficiency investments have accounted for anywhere from one-quarter to three-quarters (i.e., 25?75 percent) of the improvement in energy productivity achieved over the last four decades.*** As Figure 1 illustrates, if not for improved energy efficiency, the increase in U.S. energy consumption would have at least doubled and perhaps quadrupled between 1970 and today.

BPC’s report concluded that energy efficiency has a strong track record of providing cost-effective energy services while reducing the need for additional supply. The report recommends an extensive list of policies to improve energy efficiency in every sector, and notes that these improvements can help fuel economic growth across the economy. Ultimately, BPC’s Energy Board was unambiguous about the benefits of energy efficiency, noting that the cheapest and cleanest energy source is often the energy we don’t have to use.

** Note that energy productivity improvements include both energy efficiency and structural market changes (i.e. movement away from energy-intensive industries to services).

*** Gilbert E. Metcalf, “An Empirical Analysis of Energy Intensity and Its Determinants at the State Level,” The Energy Journal, January 2008, http://globalchange.mit.edu/files/document/MITJPSPGC_Reprint08-8.pdf.

The underlying analysis and the data set are documented at the U.S. Department of Energy, “Energy Intensity Indicators,” accessed August 16, 2012, http://www1.eere.energy.gov/ba/pba/intensityindicators/total_energy.html.