As renewable energy resources become more commercially available and cost effective, utilities across the United States are transforming the energy portfolio of the electric grid. Electric cooperatives, small, not-for-profit utilities serving 42 million consumer-members1 in 88 percent of the nation’s counties, are playing a significant role in bringing renewable energy to some of the nation’s most rural2 regions. In fact, 95 percent of the nearly 900 electric cooperatives represented by the National Rural Electric Cooperative Association (NRECA) 3 generate or procure renewable energy within the communities in which they are based, anchoring local economic and environmental benefits. The localized generation of clean power also provides community residents and local governments with new revenue streams, grants a community more direct connection to and autonomy over the production of its energy resources, and adds additional low carbon sources to the grid.

As the United States transitions to a cleaner energy future, rural areas are becoming a vital source of renewable energy development potential. Nearly 55 percent of all renewable energy investments in the United States are directed to rural areas. The increased investment and commercial development of renewable energy technology in rural areas has decreased energy costs dramatically. According to the financial advisory firm Lazard, wind costs have fallen by 67 percent and utility-scale solar costs have decreased by 86 percent since 2009. Further, the National Renewable Energy Laboratory shows biopower costs at $0.04 to $0.29 per kilowatt hour (kWh), competitive with $0.08 to $0.29 per kWh coal costs. These reduced costs are critical to unlocking the renewable energy potential of rural America. 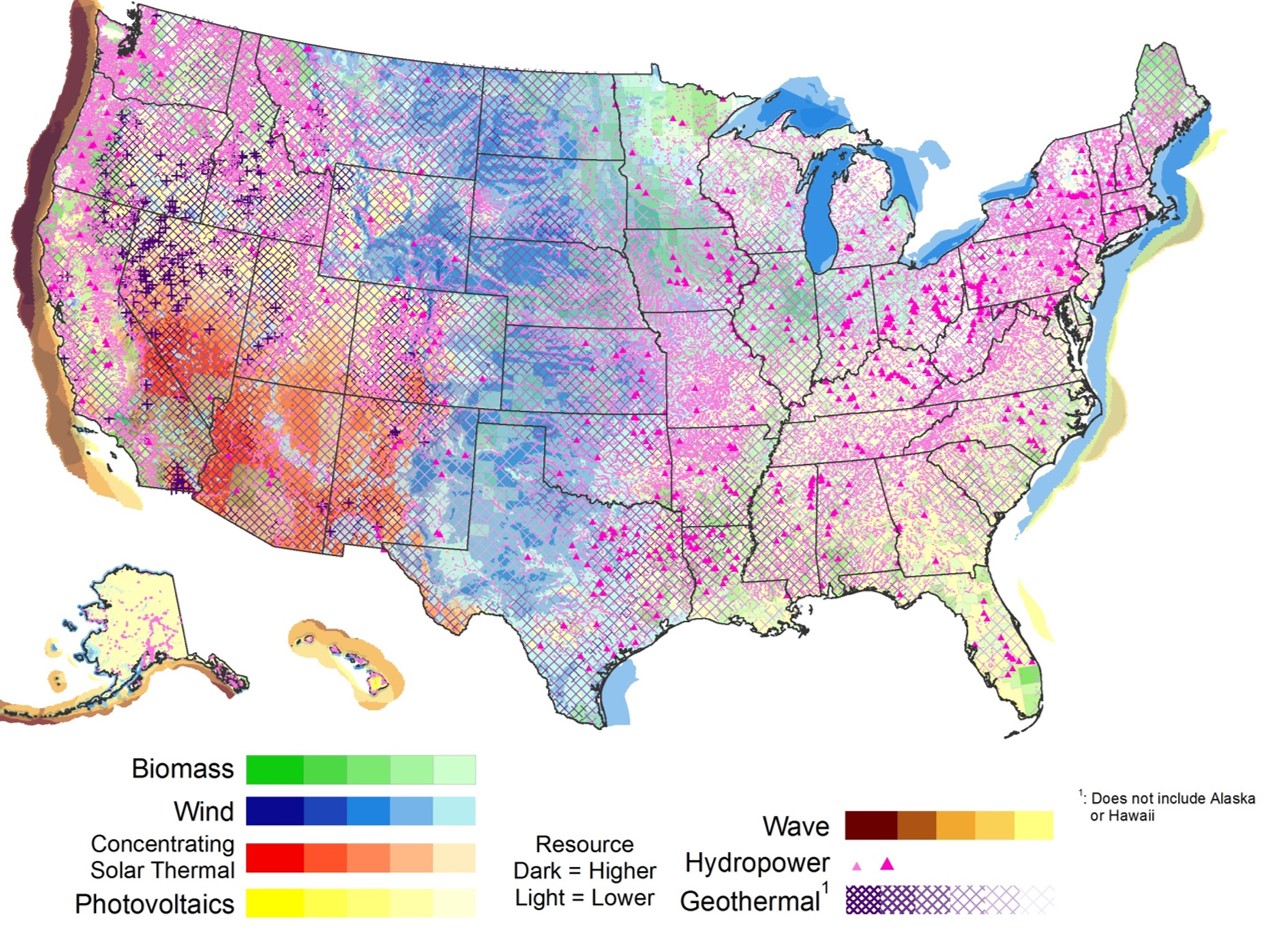 Electric cooperatives are particularly poised for harnessing the clean energy potential in rural America. Cooperatives primarily serve rural, suburban, and ex-urban areas with a community-focused mission guided by seven unique business principles. Two of these principles, the economic participation of members and cooperatives’ concern for community, have pushed electric cooperatives to explore the economic and environmental benefits of clean energy for their consumer-members.

Some of the country’s largest and most advanced renewable energy projects in community solar, photovoltaic solar, wind, biomass, hydropower, and heat recovery are run by electric cooperatives. These projects harness various renewable energy resources based on the local ecosystem of each cooperative. For example, Basin Electric Power Cooperative in North Dakota has leveraged the state’s rolling plains to add more than 1.4 gigawatts (GW) of wind power, totaling 20 percent of its generation capacity. In Iowa, Farmers Electric Cooperative generates 15 percent of its power from solar energy, providing more locally-produced energy per customer than any other utility in the country. In Puerto Rico, La Cooperativa Hidroeléctrica de la Montaña, aims to become the island’s first electric cooperative. La Cooperativa project leaders are working to reestablish the hydropower capacity of three nearby dams to offer a localized clean power option to residents in three counties. If realized, this project will also increase the natural disaster resiliency of the local electric grid by providing a nearby power source that can recover its area distribution services more readily than a remote utility. La Cooperativa’s resiliency commitment is particularly important as Puerto Rico continues to recover from the devastation of Hurricane Maria and its demolition of the island’s electric grid. 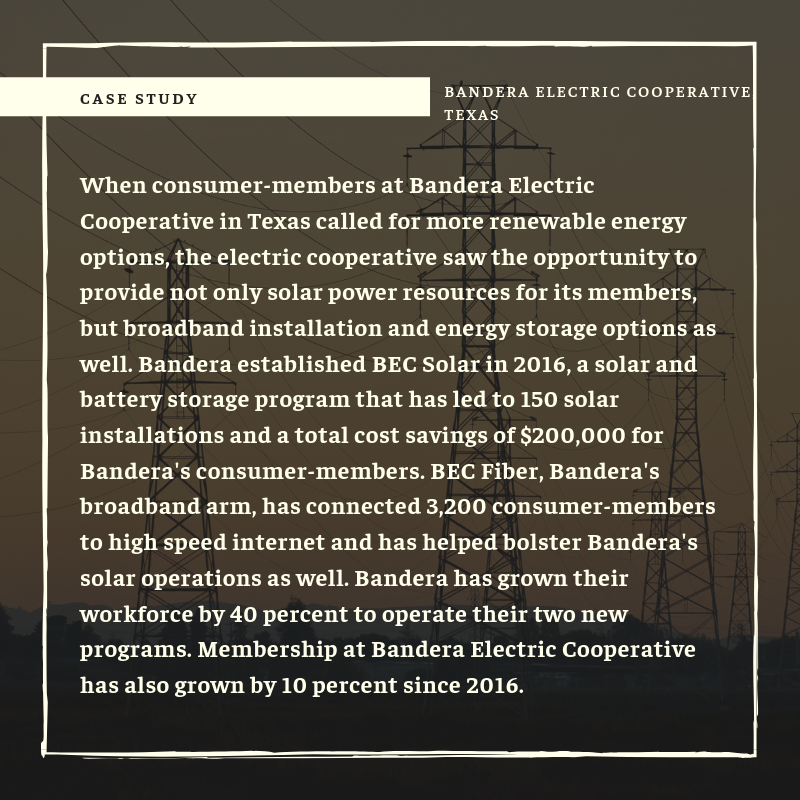 Rural areas have added 8,000 new jobs in clean energy since 2015, with job totals growing by an average of 1.5 percent per year. According to the Organization for Economic Cooperation and Development (OECD), rural economies benefit most from jobs growth in renewable energy when those jobs are embedded into the local economy or connected to a local actor. This is where electric cooperatives can be valuable economic assets—renewable energy jobs created by cooperatives can be tied directly to the local community in which the cooperative is based, creating high-quality, stable, and local positions.

Constructing renewable energy generation sources also introduces new revenue streams into the local economy. Farmers and landowners are just some of the local benefactors of renewable energy projects. In 2017, farmers received $267 million in wind farm lease payments from clean energy developers across the country. As average farming incomes have seen a sharp decline over the past decade, these lease payments have diversified and stabilized the income sources of farmers and ranchers in a crucial way. In the solar space, Roanoke Electric Cooperative in North Carolina intentionally sought land leases with minority or low-income landowners for its four community solar projects currently under development. Minority and low-income rural populations are particularly sensitive to energy price changes and are often unable to access the benefits of economic development in a community as readily as the majority members. Roanoke’s effort to directly engage with these populations in the project development process ensures that the economic benefits of clean energy can be equitably accessed by all members of the community.

City and county governments have also enjoyed a host of new revenue streams with the influx of renewable energy projects in rural areas. According to the Natural Resources Defense Council, clean energy investments in rural areas have increased county tax revenue by 10 to 60 percent in these areas. Increasing local tax revenue can have a significant impact on the quality and accessibility of public resources in rural communities. For example, wind energy projects in Illinois contributed $36 million to the property tax base in 2016, providing rural schools with extra funding to pay off debt and invest in new projects.

When electrification first reached rural households in the late 1930’s, it was lauded as one of the greatest innovations for rural society. The deployment of renewable energy parallels the era of electrification as another opportunity to connect rural areas to the heart of American innovation. In fact, localized renewable energy development equips rural actors to foster their own technological innovation by iterating their processes and leveraging local resources. The OECD noted that as clean energy developers become more specialized in their deployment of new technologies and accumulate more skills in the industry, their capacity for innovation and learning is enhanced. Electric cooperatives are a testament to this claim. In 2014, a network of 17 electric cooperatives began the Solar Utility Network Deployment Acceleration (SUNDA) project to leverage the potential of solar energy in rural America. Backed by the Department of Energy, the SUNDA cooperatives began developing solar projects in their local communities and sharing their progress with the rest of electric cooperative network through manuals and guidebooks. The resources provided by the SUNDA cooperatives helped launch hundreds of cooperative solar projects across the country. 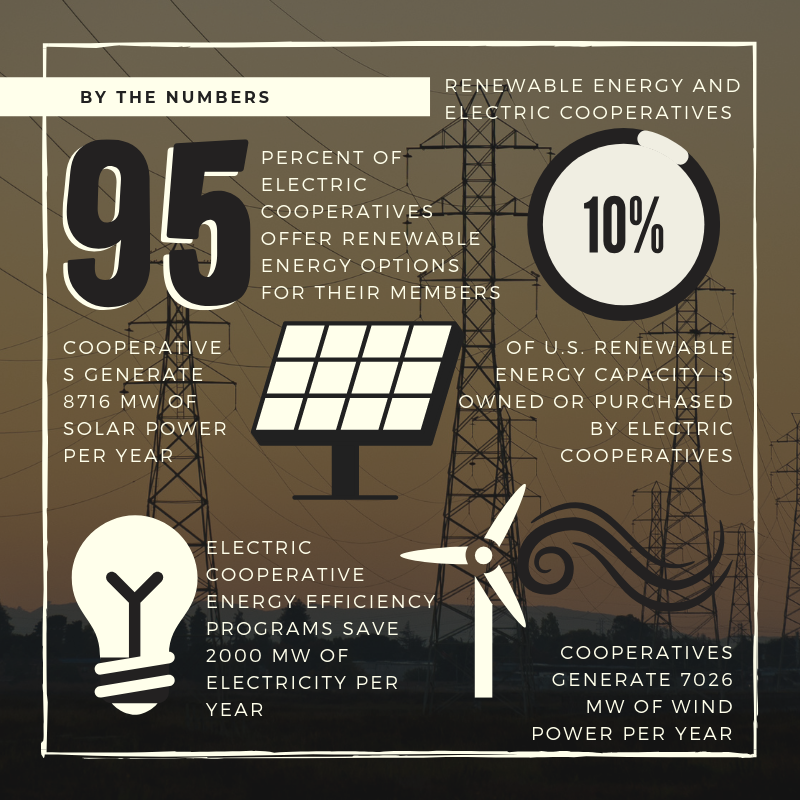 Several electric cooperatives have acted to dissolve their contracts with G&Ts and pursue more renewable energy sources. For example, Kit Carson Electric Cooperative in New Mexico paid $37 million to exit its contract with Tri-State G&T Cooperative in Colorado. Kit Carson’s new energy supplier, Guzman Energy of Colorado, offers a mix of renewable energy sources that has decreased Kit Carson’s electricity rates by 40 percent. Other cooperatives, however, do not have the financial resources to follow Kit Carson’s lead. Delta-Montrose Electric Association of Colorado dissolved its contract with Tri-State by taking legal action. Delta-Montrose took its request to the Federal Energy Regulatory Commission (FERC) who ruled that under the Public Utility Regulatory Policies Act (PURPA), the procurement of locally generated energy by a particular utility takes precedence over that utility’s contract with a G&T. Tri-State appealed this decision and then reached an outside settlement agreement with Delta-Montrose. Other cooperatives, however, including a handful in North Carolina, have successfully used PURPA to appeal for lower power purchasing minimums from their G&Ts, accelerating cooperative solar projects in the state.

Additionally, some state governments have acted to resolve contract disputes between their local cooperatives and the regional G&T. The Virginia General Assembly, for example, decreased the power purchasing minimum for Virginia cooperatives from 99 percent to 93 percent. Minnesota’s state legislature took a more aggressive approach by passing a 21.5 percent renewable energy standard for all utilities in the state. This prompted Minnesota’s G&T, Great River Energy, to build 19 solar arrays for its distribution cooperatives, leading to cost savings for the G&T and the retirement of three-fourths of Great River’s coal power plants.

Not all electric cooperatives share the same desire to exit their G&T contracts. For electric cooperatives based in coal communities or states with high levels of resource extraction, moving away from coal power presents significant economic challenges. Coal communities are highly dependent on the job opportunities supplied by local coal plants and often reliant on the tax revenues collected from coal plants to fund over a third of their budgets for local school systems and other public services.

While electric cooperatives in these regions will likely rely on coal power for the foreseeable future, steps can be taken to reduce the environmental footprint of these coal plants. Carbon capture and storage (CCS) technology can be retrofitted to coal and industrial plants to capture carbon emissions from the plant, compress the carbon for transportation, and inject the carbon into soil or rock at designated sites. CCS provides an emissions reduction option for industries that are otherwise difficult to decarbonize, such as coal power. For G&Ts to feasibly pursue CCS technology, however, federal grants would be needed to subsidize costs.

Electric cooperatives have played an important role in bolstering the growth of renewable energy in rural areas across the country. This growth has generated both economic and environmental benefits for rural communities including increased job opportunities, tax revenues, innovation, and access to affordable clean energy sources. Cooperatives now need more legal autonomy to continue expanding their renewable energy efforts. State and federal policies should look to reform the power purchasing agreements that restrict many electric cooperatives to coal power, while also addressing the economic challenges these policies present for coal communities. It will truly take a “cooperative” effort.

1 A “consumer-member” refers to a rate payer of an electric cooperative. Not only do these consumer-members purchase electricity from their cooperative, but they also possess membership benefits such as voting rights or profit-sharing.
2 For the purposes of this blog, we will define “rural” using the US Department of Agriculture’s rural-urban commuting area codes. Using these designations, 72 percent of the nation’s land area is considered rural.
3 The National Rural Electric Cooperative Association (NRECA) is a non-profit, non-partisan trade association representing over 900 electric cooperatives across 48 states.
4 An energy burden is defined by the amount of household income spent on energy resources divided by the total household income.
5 A persistent poverty county is a county with at least 20 percent of its residents living below the federal poverty level for that state during   the past four Censuses. The federal poverty level for a particular state is based on the cost of living of that state and the number of members of a household.