Migration from Cuba has been on the rise since 2013 and has spiked since the United States and the island’s communist government began opening economic and diplomatic relations in 2014. As the Pew Research Center and others reported at the end of last year, FY2015 saw a spike in the number of Cuban nationals arriving in the United States. More than 43,000 Cubans entered the United States via ports of entry in FY2015, a 78 percent increase over FY2014 when 24,278 Cubans entered (Figure 1). New monthly figures for the current fiscal year obtained from U.S. Customs and Border Protection (CBP) show that the surge has showed no signs of slowing. In addition to the approximately 20,000 legal Cuban immigrants admitted each year, FY2015 and 2016 are on track to see the highest number of arrivals since the 1980s. 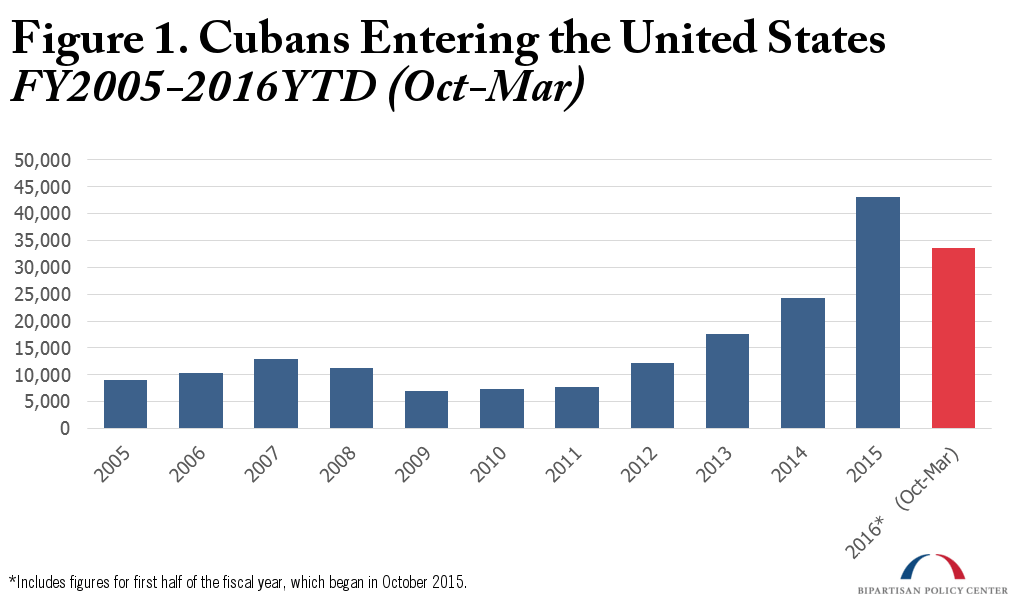 Around 33,635 Cuban nationals have arrived in the first half of FY2016 (Figure 2). Over 6,500 arrived in March when President Obama made his historic visit to the island. The half-year total is higher than the total for all of FY2014 and about three-quarters of the way to meeting FY2015’s numbers. The classic image of Cuban migration to the United States is that of migrants arriving by boat. That trend has changed significantly in recent years, with the large majority of Cubans entering the United States by crossing the U.S.-Mexico border. Under current policy, Cuban migrants stopped at sea are returned to the island, but are paroled into the United States if they arrive by land. Of the 33,635 Cubans who entered the country so far this fiscal year, approximately 71 percent entered through the Laredo Sector of the Texas border. Similarly, of the 43,159 Cubans entering in FY2015, 28,371 entered through Laredo?an 82 percent increase from FY2014. 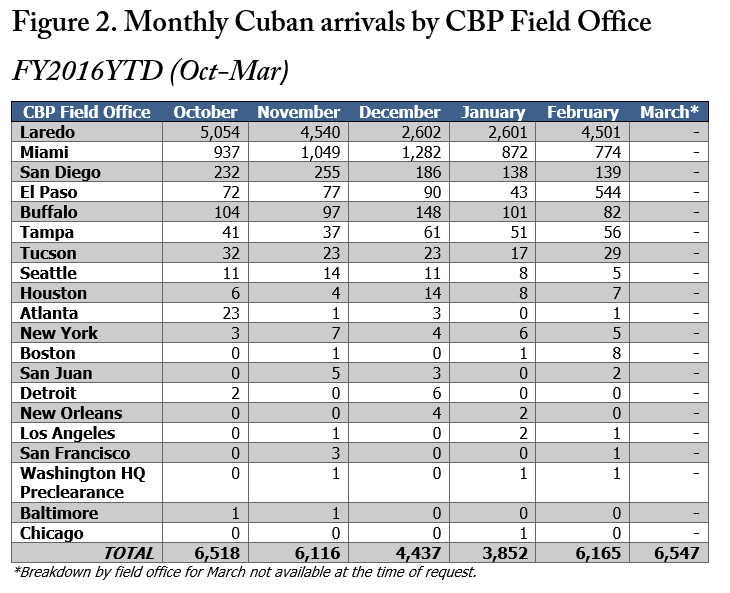 The recent lifting of travel restrictions on Cuban citizens by the Castro government is likely to have spurred some of the increased land travel to the United States via South and Central America. The Cuban government announced at the end of 2012 that it would abolish the strict exit visa permits that have been imposed on Cubans since 1961, restricting most citizens from traveling off the island. The new measures also extend the period of time Cubans can stay abroad and still return to Cuba from 11 months to two years.

The increased Cuban travel to South and Central America before heading north to the U.S. border has caused tension and border crises across the region. Taking advantage of Ecuador’s open travel laws, which don’t require entry visas, thousands of Cubans have flown to the country before making their way north. Several countries along the route began to enforce their borders and impose new visa requirements in response to the increased flow. In November, Nicaragua sealed its border with Costa Rica, leaving 8,000 Cubans stranded at the border. Since then, the stranded Cubans have been flown out to cities in Mexico, but a new build-up has formed in Panama after Costa Rica stopped issuing transit visas to Cubans. Ecuador also began imposing entry visa requirements on Cuban travelers.

Many speculate that the recent surge is also caused by fear that the special treatment of Cuban immigrants might be coming to an end as the United States and Cuba reestablish relations. As stated above, under special U.S. immigration law, most Cubans who arrive at a CBP port of entry or land on U.S. shores without a visa are generally paroled in and allowed to stay. After a year of physical presence in the United States, Cubans also have the opportunity to adjust to legal permanent resident (LPR) status. The privileged treatment and special track to a green card, which no other group of immigrants receives, dates back to a 50-year-old Cold War-era law, the Cuban Adjustment Act (CAA) of 1966.

The CAA was enacted in response to the exodus of Cubans from the island after the communist revolution brought Fidel Castro into power in 1959. The initial wave of migration occurred soon after 1959 and reached a high of around 78,000 in 1962, as the new Castro regime cracked down on political opposition and nationalized private lands, businesses, and institutions. Although the CAA predates the Refugee Act of 1980 and does not technically define Cubans as refugees or asylees, Cubans fleeing the island were in effect presumed to be refugees of Castro’s communist dictatorship.

Migration from Cuba to the United States has continued to fluctuate in the decades since. There was a sharp rise in 1980 when approximately 125,000 Cubans sailed across the Florida Straits between April and October. The mass exodus event?the “Mariel Boatlift”?was urged on by Castro, who announced that anyone wishing to leave could do so from the Port of Mariel. After subsiding for many years, political unrest in the early 1990s precipitated another wave of “Balseros” (rafters) to the United States.

In the wake of the “Balsero” crisis, the United States and Cuba reached several immigration agreements that changed U.S. policy toward Cubans. Under the migration accords of 1994 and 1995, Cubans interdicted at sea would be repatriated instead of brought to the United States, to discourage others from taking the dangerous journey. These agreements essentially initiated what has become known as the “wet foot, dry foot” policy, whereby those migrants who are interdicted at sea must return to Cuba, and Cubans who reach dry land are paroled and can adjust to LPR a year later under the CAA. The United States also agreed to take in at least 20,000 Cuban immigrants who do not qualify as refugees or immigrants under the INA preference system each year through a special visa lottery system that would randomly select visa recipients among applicants.

Once in the United States, Cuban nationals also qualify for federal public benefits that are inaccessible to unauthorized or non-immigrant foreign-born residents. The Refugee Education Assistance Act of 1980 carved out “Cuban-Haitian Entrants” as a special group of foreign nationals that were to be treated as refugees and asylees for the purpose of public benefits eligibility. Over a decade later, the Personal Responsibility and Work Opportunity Reconciliation Act of 1996, which restricted noncitizens’ eligibility for federal benefits, once again singled out Cuban-Haitian Entrants as eligible for all benefits available to refugees and asylees, including Supplemental Security Income, Temporary Assistance for Needy Families, Medicaid, and Refugee Resettlement Assistance programs.

Now that the Cold War era period of hostility is seemingly coming to an end between Cuba and the United States, it is unclear if U.S. immigration policy toward Cubans will be affected. The Obama administration has stressed that it has no plans to change current policy or seek legislative reforms to the CAA. Yet, several lawmakers are calling for changes. While President Obama visited Cuba last month, Reps. Henry Cuellar (D-TX) and Blake Farenthold (R-TX) introduced the Correcting Unfair Benefits for Aliens (CUBA) Act, which would repeal the CAA, bring an end to the “wet foot/dry foot” policy, and bar Cuban immigrants from receiving public benefits. Cuellar stated that “the preferential immigration status and benefits we bestow on Cuban migrants?are relics of a bygone era and a cold war that has long since passed.”