This BPC-staff authored post is the sixth in a series that will outline the state of retirement in America and provide a sense of the challenges that the commission seeks to address in its 2015 report.

For more information on the topics below and in the rest of this series, see our recently released staff paper,

A Diversity of Risks: The Challenge of Retirement Preparedness in America

As we discussed in our recent posts on longevity risk and long-term care risk, Americans today face the challenge of ensuring that their accumulated savings are sufficient to last through the end of their lives. For individuals who are covered by defined benefit (DB) pension plans, some of the risks in retirement are ameliorated ? the plans manage participants’ retirement investments and can provide retirees with a steady monthly income. But DB plans have disappeared from many American workplaces over the last few decades. Moreover, participating in a DB plan does not eliminate all risk for retirees. Many of the risks to DB participants ? such as plan freezes, failures, or layoffs (which can significantly affect benefits) ? are beyond their control (and we will discuss in a separate blog post). Some risks, however, such as leaving employment before benefits are available or choosing a lump-sum payment that must be managed by the retiree rather than a guaranteed monthly pension income for life, are often within participants’ control.

The Benefits of Defined Benefit

Traditional DB pensions provide a fixed monthly payment for life (sometimes with cost-of-living increases) based upon a formula that considers a retiree’s earnings (usually in their highest-earning years) and number of years worked. In contrast to DC plans, these benefits are guaranteed by the plan sponsor (i.e., the employer) regardless of investment returns and therefore provide stability to retirees’ finances. The plans also aid employees by placing the investment and administrative responsibilities on the employer, thereby reducing the degree to which employees need to be actively engaged in retirement planning.

Evidence shows that DB plans help to ensure that retirees have sufficient savings in old age. According to a 2011 study by the Employee Benefit Research Institute (EBRI), having a DB plan and retiring at age 65 was associated with an 11.6 percentage point decrease in the likelihood that an early baby-boomer retiree would run short of money during retirement, compared to other early boomers. This suggests that DB plans can dramatically increase retirement income adequacy and decrease longevity risk ? the potential for retirees to outlive their savings ? by supplying a source of lifetime income.

Employers with DB plans, however, face significant financial burdens. If contributions and investment returns are not enough to pay promised benefits, the employer is responsible for making up the difference. While DB plans are still the most common type of retirement plan among public-sector employees, these burdens help explain why DB pensions have become increasingly rare among private-sector employers over the past 30 years. For example, the 2013 National Compensation Survey found that only 19 percent of non-union, private-sector employees had access to DB plans ? a sharp decline from the late 1990s. 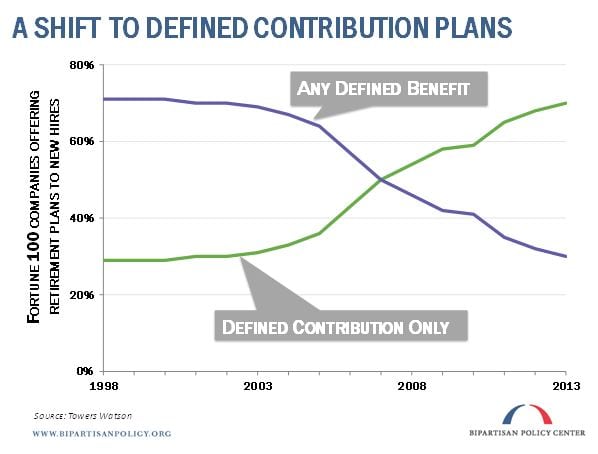 This trend reflects a number of factors, including increased regulatory requirements aimed at ensuring that plans are adequately funded; employer attempts to reduce the volatility and cost of providing retirement benefits ? employer contributions to DC plans are typically much lower; and the perspective that DC plans may be better suited for a modern, mobile workforce.

Among those companies that do still have DB plans, many have abandoned traditional DB pensions in favor of cash balance plans because they can be cheaper and easier to administer.

For Fortune 500 companies, cash balance plans, which are called “hybrid” plans because they are similar to DC plans in some ways, are now more prevalent than traditional DB plans. In a cash balance plan, employers contribute a percentage of salary to each employee’s “account” and promise a certain return on those contributions. The employer manages the investments and is responsible for delivering the promised account balance to the employee at retirement if actual investment returns fall short.

Participants in cash balance plans maintain the ability to receive benefits in the form of an annuity with fixed monthly payments for life. In a cash balance plan, and increasingly in many traditional DB plans, participants also have the option to receive the balance all at once, known as a lump-sum distribution, which is typically rolled into an Individual Retirement Arrangement (IRA). When participants have the choice, they typically select the lump sum, which may expose them to longevity risk or investment risk ? the possibility of losing savings through poor investment choices or unforeseeable, ill-timed market events.

DB Plan Participants Face Some Risks They Can Control

While DB plan participants are not able to control whether their plans are terminated or underfunded, participants nonetheless have the ability to affect some of the risks that threaten their retirement security. Two of the most salient are whether employees stay with their employers until their benefits have vested (or before large, late-career accruals in traditional DB plans) and whether employees opt to receive lump-sum payments or life annuities upon retirement (a choice that we recently analyzed).

Employees who leave their employers after short tenures may be ineligible to receive benefits contributed by their employer. Employers set how long an employee must remain with the company before their retirement benefits become available, a process known as “vesting.” By law, employers must grant employees access to 100 percent of employer contributions within five years if they make the benefits available all at once through “cliff vesting” or within seven years if access is granted in a progressive fashion through “graduated vesting.”

Although some employees may choose to leave jobs before being eligible to receive their full benefits, others are fired or laid off and may not have any choice. Additionally, in traditional DB plans, large benefit accruals are back-loaded to later in an employee’s career; workers who leave an employer with a traditional DB plan mid-career could miss out on a disproportionate amount of benefits. One advantage to cash balance plans (or DC plans) is that benefit accruals occur more smoothly throughout a career, limiting the penalty for participants who change employers in the early or middle parts of a career.

DB plans have declined in availability and participants face a variety of risks, including benefits not vesting and running out of money in retirement after taking a lump-sum distribution. However, employees can take measures to avoid these risks by maintaining awareness of the vesting status of their retirement benefits and giving due consideration as to whether an annuity will meet their long-term needs more effectively and reliably than a lump-sum payment.