Defense spending will soon return to the legislative forefront as the Senate readies for debate on the Fiscal Year 2018 National Defense Authorization Act (NDAA) next month after the bill’s unanimous and bipartisan passage through the Senate Armed Services Committee. The House of Representatives has passed its version of the NDAA by an overwhelming margin. As both bills increase allocations for defense, one might conclude that a major increase in defense spending seems inevitable.

The reality of the budget spending caps (sequester caps) still holds defense spending increases hostage. Since FY 2018 appropriations bills are expected to pass Congress well after the October 1 start of the new fiscal year, defense spending will remain at the previous year’s appropriated levels until the new spending legislation is approved.

Both bills, in their current form, represent significant departures from last year’s benchmark of defense funding. The Senate bill proposes $632 billion in base discretionary defense funding, while the House bill proposes a $623.8 billion ? both nearly 20% higher than last year’s funding level. Further, both bills provide significant authorizations for Overseas Contingency Operations (OCO) in addition to the base funding levels, which bring the proposed total defense spending levels up to $700 billion and $688 billion for the Senate and House respectively. These proposed increases in funding may seem drastic upon first glance. Indeed, total defense levels would increase by about $100 billion, or 20 percent, in one year. But consider the context. 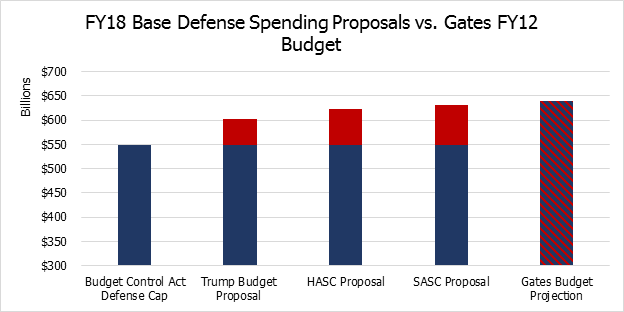 Current and former Secretaries of Defense, as well as the Joint Chiefs of Staff, have all echoed the same conclusion: the Budget Control Act caps have done palpable harm to U.S. military readiness. As General Joseph Dunford said in a congressional hearing in June, “without sustained, sufficient, and predictable funding I assess that within 5 years we will lose our ability to project power; the basis of how we defend the homeland, advance U.S. interests, and meet our alliance commitments.”

Even given General Dunford’s dire prediction, it is unlikely that either the Senate or House NDAA increases will become law. As it stands, any new additional appropriations for defense would have to be reallocated from the nondefense discretionary budget, due to the Budget Control Act caps. Democrats, and some Republicans, are unlikely to support such reallocations.

Defense spending will soon return to the legislative forefront. Is the Senate ready?

Unfortunately, it is far more likely that such a “grand bargain,” in which Republicans would negotiate with Democrats to repeal the Budget Control Act, will fail as it has in the past. Then the only remaining options would be a slightly modified “small-deal” FY 2018 Budget Resolution, with no significant increases in funding for either defense or nondefense discretionary, or a Continuing Resolution with no changes at all. In fact, a continuing resolution would actually trigger slight spending cuts for defense, as the Budget Control Act spending caps for FY18 are slightly lower than last years spending levels.

Alongside growing angst about increasing the nation’s statutory debt limit and major efforts for significant tax reform, trying to pass either a FY 2018 Budget Resolution or higher levels of defense spending in the appropriations bills may simply fall to the wayside of the legislative logjam in September. In any case, getting defense spending back on track will take bipartisan leadership.

As Senate Armed Services Committee Chairman John McCain put it in a recent floor speech: “What have we to lose by trying to work together to find those solutions? We’re not getting much done apart?There’s greater satisfaction in respecting our differences, but not letting them prevent agreements that don’t require abandonment of core principles, agreements made in good faith that help improve lives and protect the American people.”

Has Defense Spending Turned the Corner?