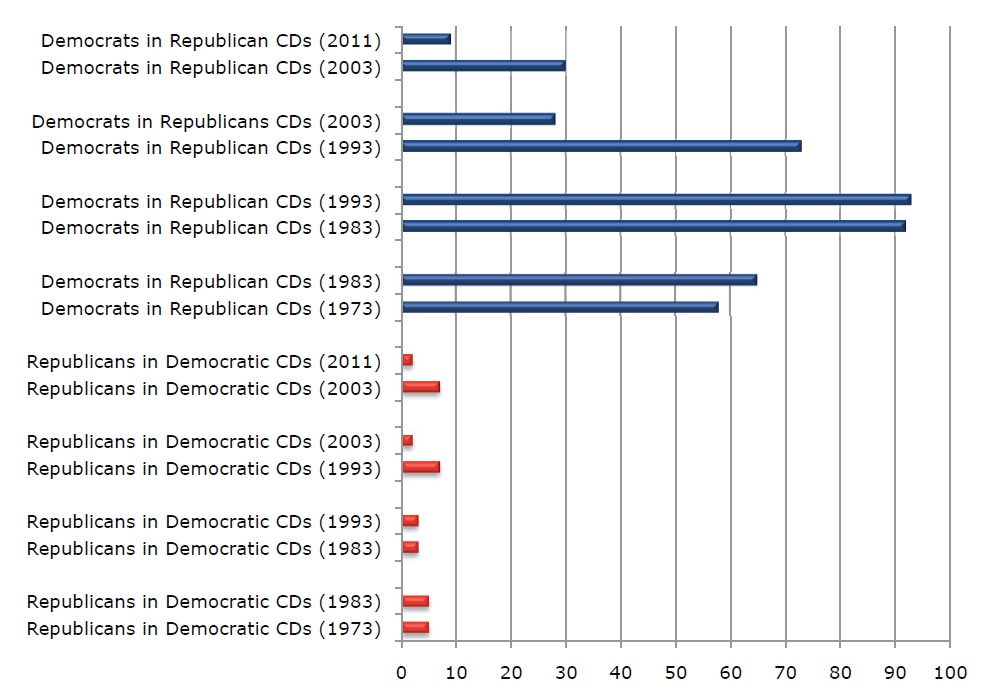 From our new redistricting report:

For many years in Congress, there have been a large number of misaligned seats?held by one party even though the home district strongly favors the other party in presidential elections.

The party system that dominated U.S. politics from the 1930s to the 1990s was one in which the political parties were not nearly as ideologically polarized as they are today. The majority of the Democratic Party had a very substantial wing of white Southern members who were very conservative and not always in agreement with the more progressive wing of the party on many issues. In this system, it was possible to distinguish oneself as an “Alabama Democrat,” which meant something very different than being a national Democrat. As Southern Democrats began to vote for Republican presidents, they still often retained loyalty to conservative Democratic representatives. This phenomenon was not limited to the South, but the largest share of these seats were Southern. Similarly, there were Republicans representatives?primarily in the Northeast?who represented districts that voted strongly for the Democratic Party…

The Significance of Misaligned Seats

In each of the decades of the 1970s, 1980s, and 1990s, over 30 seats changed from one party to another due to realignment. A member of Congress who held a congressional seat in a district favored by the opposing party was replaced by a member whose party politics was consonant with the district. In the 2000s, over 25 seats realigned.

As the number of misaligned seats has dwindled down to a handful, by definition there will be almost no seats that turn over because of party realignment. Almost all have already turned over.