As Congress enters last-minute deliberation over government funding for the new fiscal year that starts October 1, lawmakers should be mindful of another recurring issue just over the horizon?the federal debt limit. Less than two months into the next president’s term, the debt limit will once again be reinstated, demanding prompt attention from policymakers.

Less than two months into the next president’s term, the debt limit will once again be reinstated, demanding prompt attention from policymakers.

The debt limit caps the amount of money the Treasury Department can borrow to pay for federal obligations. It has been suspended since November 2, 2015, and is set to be reinstated on March 16, 2017 at roughly $20.1 trillion, according to BPC’s latest projections. This amount would precisely cover all borrowing that occurred to fund government obligations subsequent to its last suspension. 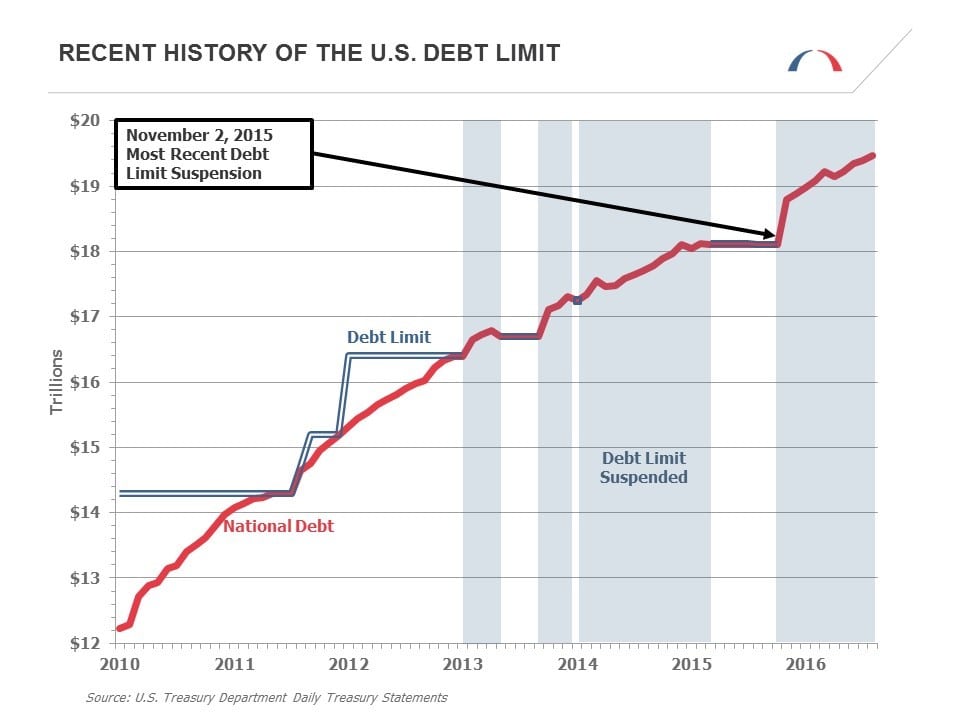 When the debt limit is reinstated, the federal government’s accumulated debt will immediately equal the new ceiling. The only way for Treasury to ensure that it continues to meet all government obligations in full and on time?absent action by policymakers?would be by deploying so-called “extraordinary measures.” These include various legal maneuvers that allow Treasury to temporarily reduce its intragovernmental debt?such as by delaying contributions to federal retirement funds?to make room for additional borrowing from the public that is necessary to finance current obligations.

BPC’s projections show that the use of available extraordinary measures would allow the federal government to continue meeting all of its obligations until at least mid-summer of 2017. Ultimately, sometime in the months thereafter, the federal government would be unable to continue making all payments in full and on time?a date that we refer to as the “X Date.” This is when extraordinary measures would be completely exhausted and Treasury would have insufficient cash on hand to cover all of its bills.

BPC’s projections show that the use of extraordinary measures would allow the government to continue meeting all of its obligations until at least mid-summer of 2017.

It is important to stress the uncertainty involved in all debt limit estimates. The federal government is scheduled to take in and pay out trillions of dollars between now and the middle of 2017. A sudden shift in the trajectory of the economy or significant changes in spending or tax law could alter these projections.

As we have stressed before, delaying action on the debt limit increases the associated risks, some of which may not be apparent until after the impasse and others that are never fully recognized. In recent years, policymakers have made a habit of waiting until the last minute to reach agreement. But with adequate foresight and willingness to act, the inherent risks of delay can be avoided this time around.