The second in a series of posts on the Budget Control Act.

The Budget Control Act (BCA) of 2011 left much to be desired. The final deal was thrown together at the last minute, even though months of deliberations on our debt and deficits had prepared us for this moment. The deal punted most of the deficit reduction to a “super committee” and to future congresses. The deal left the two most important and contentious issues ? entitlement and tax reform ? untouched. The list goes on.

However, of all the legitimate critiques that liberals, conservatives, and budget hawks have and will continue to throw at the debt ceiling deal, the claim that this bill does nothing to improve the nation’s fiscal picture is not one of them. The significant restraint on both domestic and defense appropriated spending is a necessary component of any broad effort to deal with our deficit problem. When these caps on discretionary spending are combined with the $1.5 trillion savings goal from the newly-formed Joint Select Committee on Deficit Reduction ? or the $1.2 trillion in cuts from the sequester, if the committee is unsuccessful ? they produce a noticeable change in our debt burden a decade from now.

As the graph below illustrates, U.S. debt as a percentage of gross domestic product (GDP) is currently around 70 percent and is projected to rise to 85 percent by the year 2021 under the BPC’s plausible baseline. For reference, the nation’s average debt since the middle of the last century has hovered just over 35 percent of GDP. Today’s rising debt levels represent a marked increase that will only intensify as the baby boomers retire en masse. The BCA, if enforced, will somewhat mitigate that path, and reduce projected debt in 2021 by approximately 10 percent of GDP. 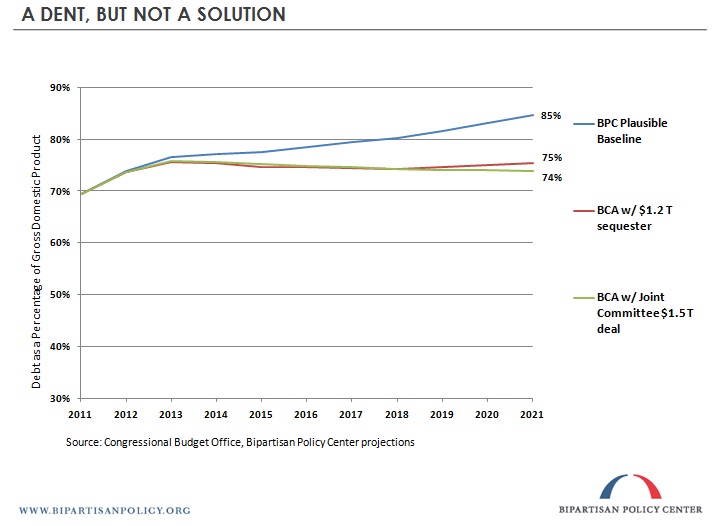 That said, while these reforms make a dent, they do little to alter the trajectory of our fiscal path in the following decade. Debt relative to the economy will continue to rise unsustainably, primarily because the BCA avoided addressing entitlements and revenues. Both the president’s Fiscal Commission and the BPC’s Debt Reduction Task Force recommended stabilizing the debt below 60 percent of GDP. Furthermore, given recent weak economic data, growth projections are likely to be revised downward in the coming months. The result may be that even this moderate deficit reduction in the BCA that we strived, negotiated, sacrificed and fought for will turn out to be illusory ? swallowed up by a sluggish economy.

Policies to address our ailing economy are critical, but they should not prevent us from planning ahead. We must quickly double down on the BCA’s efforts, and enact legislation that will produce further deficit reduction in the out years, once the economy has recovered. Only a comprehensive fiscal plan, such as Bowles-Simpson or Domenici-Rivlin, will significantly bend our debt trajectory in the right direction. The Joint Select Committee should go big and strive for a grand deal, along the lines of these two commission reports and the bargain that was nearly struck in recent weeks between President Obama and Speaker Boehner. The groundwork has been laid, if only the political will can be found.