At a mid-summer rally in West Virginia, President Trump declared “I want crystal clean water. And we’ve got it.” While that is true for some areas of the country, it is unfortunately not the case for far too many Americans.

In addition to the problems that plague America’s aging drinking water and wastewater systems, as BPC has extensively discussed, several major waterbodies have persistent contamination issues. Of America’s 3.5 million miles of rivers and streams, only 31 percent have been assessed and, of those, 53 percent do not meet health and safety standards. Of the 41.7 million acres of lakes, reservoirs, and ponds across the country, 44 percent have been assessed, and 71 percent of those have dangerous contaminates that render them far short of “crystal clean.”

To date, the Trump administration’s stated vision for cleaning up our waterways is to shift power from the federal auspices of the Environmental Protection Agency into the hands of local authorities, while reducing red tape and burdensome regulations. While there is much debate between state and federal responsibilities around environmental policy, there is at least one bipartisan approach that strives to strike a balance and can serve as a model to restore our nation’s waterways.

Across the upper Midwest, a regionally led and streamlined effort is underway to reduce and remove toxic sediment in all five Great Lakes. 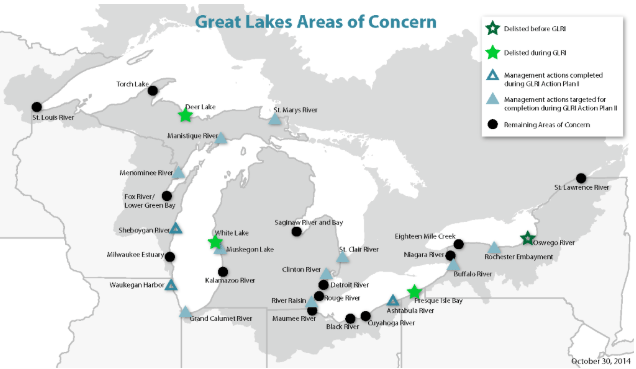 The effort came in response to what many saw as a breaking point, after a post-war industrial boom left rivers across the Rust Belt so heavily polluted by chemicals and industrial waste that they even burst into flames.

In response, the Federal Water Pollution Control Act of 1972, more commonly known as the Clean Water Act, or CWA, was designed to clean up America’s waterways, promote public health, and protect aquatic ecosystems. Since that time, the CWA has proven to be an effective deterrent and mechanism for reducing “point source pollution,” or those with an identifiable cause or polluter, but less progress has been made on “nonpoint source pollution,” or waters contaminated from many unidentifiable sources. Most nonpoint source pollution is the result of runoff, when heavy rainfall washes agricultural byproducts into a body of water or pulls oils and grease from city streets.

Following the CWA’s enactment, an international assessment of the Great Lakes revealed 43 “areas of concern,” where contaminated sediment impaired water quality. Twenty-six of these areas of concern are located in the United States,12 are in Canada, and 5 span both sides of the international border. Despite numerous local and federal efforts to remediate these areas, the contamination persisted?in part due to the diffuse nature of nonpoint pollution and sheer size of the Great Lakes, which span eight states and Canada. Thirty years after the CWA was passed, former Rep. Vernon Ehlers (R-MI) proposed a solution in the form of the Great Lakes Legacy Act. With bipartisan support, the act was passed under President George W. Bush. Any nonfederal entity can submit a sediment removal project to the GLLA, including states, cities, non-profits, and businesses. EPA’s Great Lakes National Program Office in Chicago works to evaluate each proposal and coordinate with state and local partners to implement an awarded project. A partnership with Illinois-Indiana Sea Grant ensures communities have a meaningful connection with the projects.

In 2010, the Great Lakes Restoration Initiative (GLRI) expanded efforts to restore the basin. Pulling together 16 federal partners across 11 different federal agencies, the GLRI connects federal and nonfederal partners under a shared goal of accelerating efforts to protect and restore the Great Lakes. In addition to addressing contaminated sediment, the GLRI’s encompasses work in the larger Great Lakes basin, including the restoration of habitats, the prevention and control of invasive species, and projects to monitor and improve water quality.”

The Successes
So Far

Nearly 4,000 projects have been funded through GLRI, leading to the remediation of 4.1 million cubic yards of contaminated sediment?the equivalent to over 800 million gallons?that contained lead, polychlorinated biphenyls, or PCBs (a now banned category of chemical compounds), and mercury. Seven of the original 43 sites have been delisted as “areas of concern” (four in the United States and three in Canada), and another 13 sites have or are expected to complete all the “management actions” necessary for delisting by 2019. Since 2010, GLRI has protected, restored, and enhanced over 642 miles of Great Lakes shoreline.

The progress made so far has had sweeping impacts. Take the Sheboygan River in Wisconsin, which empties into Lake Michigan, but was once so contaminated that eating fish and wildlife from the river could cause developmental impairments in children, a higher risk of cancer, altered thyroid hormones, and damage to both the reproductive and immune systems. Using funds from EPA’s Superfund program and GLRI, the cleanup of the Sheboygan River removed 400,000 cubic yards of contaminated sediment. Today, the economic benefits of a cleaner river can be seen as new housing and restaurants have opened along the city’s riverwalk.

Across the Great Lakes, for every dollar spent on the GLRI cleanup effort, an estimated two to three times has been generated through increased property values, reduced municipal costs, and direct economic benefits from tourism, recreation, and fishing.

Since the Clean Water Act was signed into law in 1972, government and industry have spent over $1 trillion (or $100 per person per year) on remediating water pollution. While cleanup initiatives can be expensive, they also generate far reaching economic and health benefits. Despite the GLRI’s successes and the program’s seeming alignment with the Trump administration’s preference for locally led environmental efforts, both of the president’s proposed annual budgets have requested the GLRI to be effectively defunded.

The problem of persistent contamination from sources that spread across numerous states and jurisdictions is not unique to the Great Lakes. The Mississippi River alone is heavily polluted by nonpoint source contaminants from the 10 states that it runs through or along, and from the broader Mississippi Watershed, which stretches from Montana to South Carolina and from New Mexico to New York. By taking a comprehensive and regional approach, with nonfederal buy-in and an emphasis on collaborative public-private partnerships, the GRLI offers a blueprint for how the United States could restore its other major waterbodies. In addition to continuing to support the GLRI, replicating the aspects that have made it so successful would inch the country closer to being able to tout the claim of having “crystal clean water.”

Special thanks to the Illinois-Indiana Sea Grant for
their contribution to this research.

Note:
This post has been updated to more clearly describe the GLLA and GLRI programs.