We have already released analyses of fiscal year (FY) 2013 budget proposals from House Republicans, House Democrats, and the Congressional Progressive Caucus (CPC). The actual text of those budgets, along with President Obama’s budget submission, can be found at these links: House GOP, House Dems, CPC, Obama.

Last night, however, the only bipartisan budget proposal of this year was brought to the floor of the House of Representatives. It failed, but received 38 votes in support split nearly evenly between the two parties. The bipartisan budget is co-authored by Reps. Jim Cooper (D-TN) and Steve LaTourette (R-OH), and is roughly modeled after the Bipartisan Policy Center (BPC) Domenici-Rivlin Task Force and the Simpson-Bowles Commission. From the text itself: “The bipartisan Simpson-Bowles Fiscal Commission and the bipartisan Rivlin-Domenici Debt Reduction Task Force were correct in concluding that everything, including spending and revenue, should be ?on the table’ as part of a deficit reduction plan.”

While not thoroughly detailed with every proposal, the bipartisan Cooper-LaTourette budget is more than a shallow outline ? it is roughly as specific as the rest of the budget resolutions that have been proposed this year in the House. The plan would enact tax reform by lowering both the corporate and individual income tax rates and raising revenue by broadening the base. Policies are endorsed that improve the health of the Social Security program, restrain health care cost growth, control annually appropriated spending, and make cuts to other entitlement programs, all of which were key components to the BPC Domenici-Rivlin plan. This all-inclusive approach makes Cooper-LaTourette the most comprehensive of all the FY 2013 budget proposals, and the only one with both Democratic and Republican support.

We strongly commend Reps. Cooper and LaTourette for their serious and bipartisan approach to the fiscal problems facing the country. Few policymakers have developed substantive proposals by working across the aisle on these vital issues, and this proposal represents a significant step in the right direction.

The Cooper-LaTourette budget submission has been called “the Simpson-Bowles proposal,” but it is important to understand the ways in which the plan deviates from those of the bipartisan commissions on which it is based. The two most significant differences, expanded on in the relevant sections below, are first, that Reps. Cooper and LaTourette propose to raise approximately $1 trillion less revenue over the decade than Simpson-Bowles and Domenici-Rivlin; and second, that their budget cuts to non-defense annually appropriated (discretionary) spending are harsher than either of the bipartisan commissions. In fact, the Cooper-LaTourette budget reduces non-defense discretionary (NDD) spending almost as much as is mandated by the sequester, and leaves this spending lower than the sequester levels in 2022. These two substantial deviations from the original bipartisan groups may explain why some members were reluctant to lend their support to the budget resolution on the House floor.

Overall, this budget proposal signifies a valiant effort to move past partisan politics and bring the nation’s vital budgetary issues to the fore. More hard work in this vein lies ahead before policymakers can claim to have tackled one of the critical policy challenges of our time.

What follows is an analysis of the Cooper-LaTourette proposed budget. As with our summaries of previous budgets, this post will focus heavily on the 10-year budget window. Although it is critical to understand the long-term effects of major policies included in any debt reduction plan, significant uncertainty in projections and lack of specificity in policies make concrete scoring beyond the first decade extremely difficult for these budget resolutions.

The Cooper-LaTourette budget restrains debt to under 70 percent of the economy ? or gross domestic product (GDP) ? in 2022, a similar level to that achieved by the Simpson-Bowles commission and the BPC’s Domenici-Rivlin Task Force (67 percent). The proposal by Cooper and LaTourette does so by raising $1.3 trillion in new revenue through tax reform (excluding Social Security) and cutting roughly $2.7 trillion from spending (including interest). Notably, if the proposal had retained the same amount of revenue as Simpson-Bowles (or Domenici-Rivlin), it would have reduced the ratio of debt to GDP to nearly 60 percent, an internationally recognized standard of minimal fiscal prudence.

The charts below illustrate the revenue and spending levels achieved in 2022 by each major budget plan, and what each would do to the debt over the next 10 years: 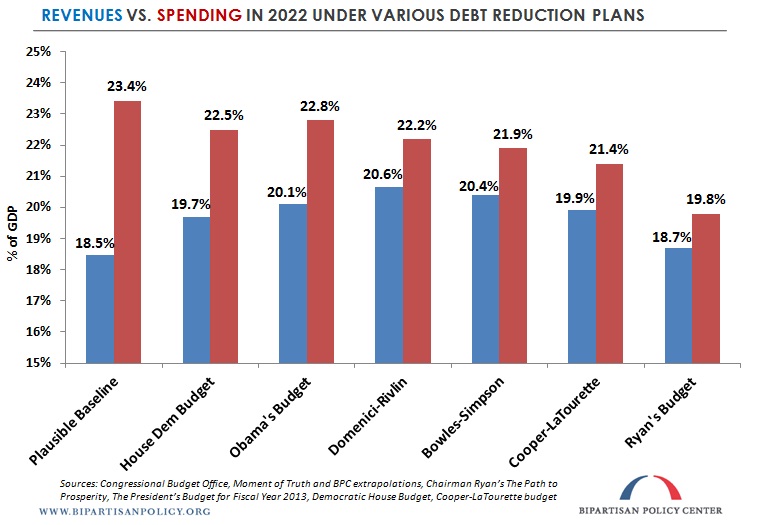 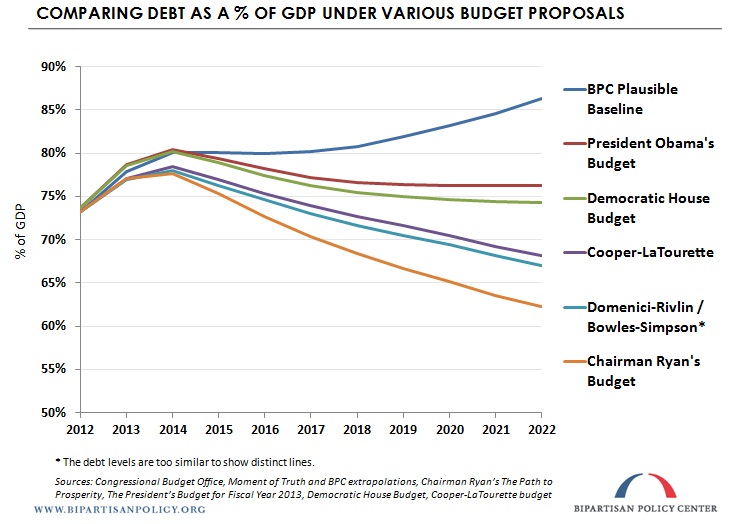 The Cooper-LaTourette budget would require an increase in the debt ceiling of roughly $6.5 trillion by 2022, an amount in the general vicinity of all other recent budget submissions.

The Cooper-LaTourette budget calls for the two parties to work together to reform Medicare along the lines of the proposals from the Simpson-Bowles commission. Beginning in 2020, the plan advocates setting limits on the annual growth of the total federal government budgetary commitment (including Medicare, Medicaid, other smaller entitlements and related tax expenditures) to health care. Cooper and LaTourette would restrain the annual growth to the increase in the size of the economy ? or GDP ? plus one percent. The means for achieving this goal and the enforcement upon failure are unclear.

A potential issue with this proposal is that federal spending on healthcare programs, which is focused predominantly on Medicare and Medicaid, is projected to rise substantially faster than GDP+1 percent annually over the coming decades. This is due, in large part, to the aging of the population as the baby boomers move into their later years. While some efficiencies in health care likely can be achieved, the amount of savings required to hold total annual growth to GDP+1 percent would necessitate substantial benefit cuts. Notably, other recent proposals that have suggested caps on healthcare spending ? such as Ryan-Wyden premium support and the Affordable Care Act ? seek to restrain federal support per beneficiary in a certain program, and thus are significantly less likely to shift costs onto beneficiaries.

Finally, Cooper and LaTourette would permanently reform or replace the Medicare sustainable growth rate (SGR) for physicians’ payments, preventing the 27-percent cut in those payments that is scheduled to take place in calendar year 2013. This automatic cut resulting from the SGR mechanism installed in the 1990s has been avoided in recent years by providing offsetting deficit reduction ? referred to as the “doc fix.” This budget fully prevents the physician payment cut by more than paying for the “doc fix” over 10 years through a reconciliation process to achieve roughly $600 billion in savings from healthcare programs. This is equivalent to the 10-year healthcare savings in Simpson-Bowles and approaches those savings in Domenici-Rivlin.

While the Cooper-LaTourette plan does not provide specifics on a package of Social Security reforms, it does go further than any of the other recently-released budgets in calling for adjustments to both the benefit and revenue sides of the equation. It encourages bipartisan collaboration to strengthen the program, and outlines recommended principles and a framework along the lines of the BPC Domenici-Rivlin and Simpson-Bowles commissions. Four general policies are explicitly supported in the document:

The Cooper-LaTourette budget encourages both parties to work together toward comprehensive tax reform. The document states that the reform should abide by the “principles and framework outlined in the bipartisan Simpson-Bowles Moment of Truth report and the bipartisan Domenici-Rivlin Restoring America’s Future report.” One significant difference, however, is that this budget raises roughly $1 trillion less revenue over the decade than both of those bipartisan commissions.

Similar to the Ryan budget, Cooper and LaTourette do not provide many specifics on the final tax reform product, but below are some of the enumerated guidelines:

The budget would index to inflation the Alternative Minimum Tax (AMT) exemption level. This “patch” is fully paid for over the decade at a cost of roughly $1 trillion.

Cooper and LaTourette also propose to extend the current estate tax exemption level of $5 million, with a top rate for taxing assets above that set to 35 percent. For context, under current law for 2013, the exemption would revert back to $1 million with a top rate of 55 percent. This budget would prevent those changes.

According to our interpretation of the scoring, compared to the Simpson-Bowles plan, this budget would cut almost $100 billion less from defense and over $150 billion more from non-defense annually appropriated spending over 10 years. Compared to BPC’s Domenici-Rivlin plan, Cooper and LaTourette cut significantly greater amounts from both of these categories ? roughly $200 billion more from each over the decade. 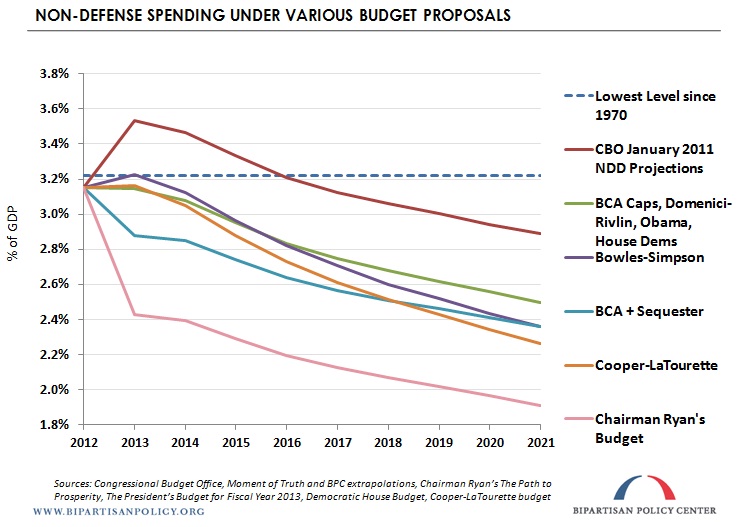 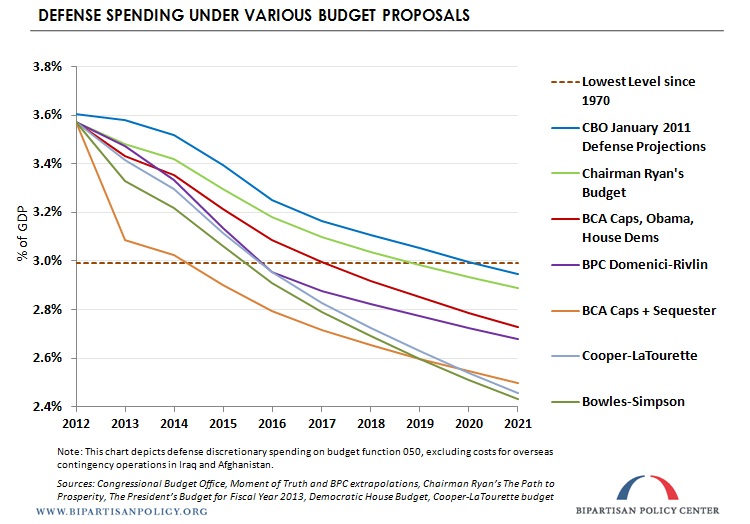 The bipartisan Cooper-LaTourette budget would follow the recommendation by the Simpson-Bowles and Domenici-Rivlin commissions to switch to the chained consumer price index (C-CPI) for all federal spending programs, as well as parameters in the tax code. This is projected to reduce the deficit by nearly $300 billion over the coming decade.

Cooper and LaTourette propose a reconciliation process for the authorizing committees to identify approximately another $300 billion of deficit reduction through cuts to mandatory spending over the 10-year budget window. The budget states that some of these savings should come from reductions to federal retirement programs and agriculture subsides.

The Cooper-LaTourette plan also calls for matching spending to revenues (primarily the gas tax) for the Highway Trust Fund, closing the funding gap in transportation programs. Moving forward, all transportation funding would be characterized as mandatory spending for budgetary purposes.

The plan also proposes a number of relatively minor accounting and process changes to realize gains and minimize losses in certain areas of the federal budget:

First, the budget would place statutory caps on annually appropriated (discretionary) spending for each of the next 10 years. The caps would be split between security and non-security spending through FY 2015. Additionally, limit the amount of funding for Overseas Contingency Operations through 2021. Congress would have to waive this cap via a supermajority vote in order to exceed the spending cap for an overseas conflict. All of these caps are enforced by means of sequestration.

Cooper and LaTourette also call for establishing a debt stabilization process to help ensure that the budget is in primary balance (i.e., non-interest spending is equal to revenues) by 2015, and that the debt-to-GDP ratio remains stable in the following years. This would be done by giving fast-track authority to any Member of Congress who proposes debt reduction legislation in a year where the goals stated above have not been met.

One possible issue with this proposal is that it would facilitate fiscal contraction through spending cuts or tax increases during times when GDP is depressed (thereby increasing the debt-to-GDP ratio). Such policy could further restrain economic growth during difficult stretches. An alternative enforcement measure that avoids this problem, SAVEGO, was proposed by BPC last year in collaboration with Sen. Domenici and Dr. Rivlin.

Finally, the Cooper-LaTourette budget allows the use of “fair value” accounting for assets and liabilities when scoring policies affecting federal credit programs. Some contend that this calculation provides a truer picture of the costs by incorporating risk into the estimates.