At this week’s House Armed Services Committee hearing, this warning came loud and clear from the Joint Chiefs of Staff who emphasized that failure to approve a full-year Department of Defense appropriations bill for FY2017, and the accompanying $30 billion defense supplemental, will allow foreign adversaries to eclipse much of America’s air, naval and ground superiority.

Army Chief of Staff Gen. Mark Milley told the committee, “Candidly, the failure to pass a budget, in my view as both an American citizen and the chief of staff of the United States Army, constitutes professional malpractice.”

Congress faces serious problems in trying to pass both the FY2017 budget for the remainder of this fiscal year and approving a FY2018 budget.

The current FY2017 Continuing Resolution expires April 28.  If not extended or replaced by congressionally approved individual spending bills, the federal government will once again experience a shutdown.

Complicating Congress’ task are new spending requests from the Trump administration, including a $30 billion defense and national security supplemental and an $18 billion cut in domestic spending. Members of both parties in both chambers have expressed reservations about these supplemental recommendations.

As we have written before , Congress faces serious problems in trying to pass both the FY2017 budget for the remainder of this fiscal year and approving a FY2018 budget by the October 1 start of the new fiscal year.

Adding more pressure to the fiscal challenge is the need to extend the federal debt ceiling in the fall, pass a FY2018 Congressional Budget Resolution, and extend certain expiring domestic programs.

The possibility of a government shutdown over spending priorities seems increasingly possible.

The possibility of a government shutdown over spending priorities seems increasingly possible as the April 28 deadline approaches, and a greater probability at the beginning of the next fiscal year.

For the Defense Department, among the major consequences that the Joint Chiefs warned could occur unless the FY2017 defense spending bill and accompanying supplemental pass are the following:

In addition to these risks, defense spending has already been facing downward pressure due to the sequestration caps enacted by the 2011 Budget Control Act, which took effect in FY2012. The chart below shows how the sequestration caps have slashed almost $900 billion from the FY2012 defense budget proposed by Secretary of Defense Bob Gates under President Obama. 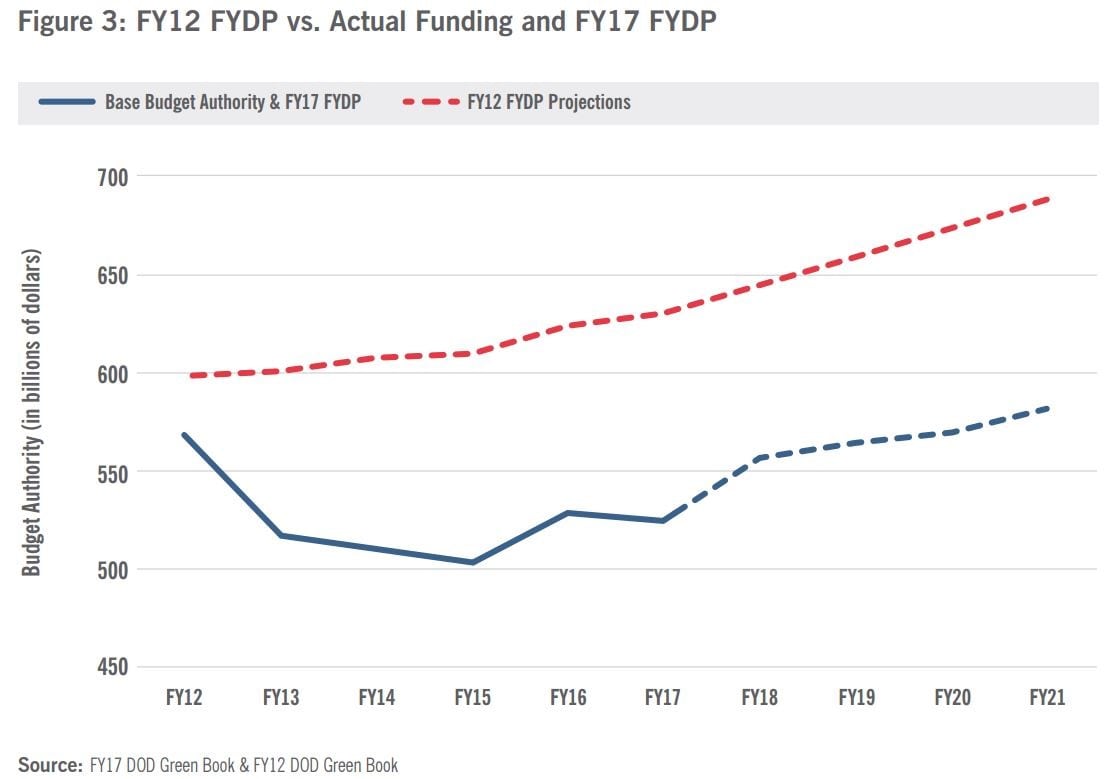 Congress Needs to Finish the 2017 Budget

Deadlines Begin To Hem In Congress