Last month, with federal government funding set to expire, both the Senate and the House passed (H.R. 933) to provide discretionary funds for the rest of Fiscal Year (FY) 2013. In the aftermath of the sequester cuts that went into effect on March 1, this legislation alters the precise impacts of those reductions by protecting or softening the blow to spending on certain priorities. The changes in H.R. 933, however, will do relatively little to mitigate the sequester’s overall impact or indiscriminate nature.

Separate appropriations ? which include updated spending allocations to all relevant accounts ? were passed for Agriculture, Commerce-Justice-Science, Defense, Homeland Security, Military Construction-Veteran’s Affairs, and for several specific programs within other departments. For the rest of the annually appropriated spending categories, the CR portion of H.R. 933 simply extended last year’s funding levels with minor adjustments. The following table compares the allocations for each spending category under the CR that was in place for the first six months of FY 2013 (H.J.Res 117) and H.R. 933:* 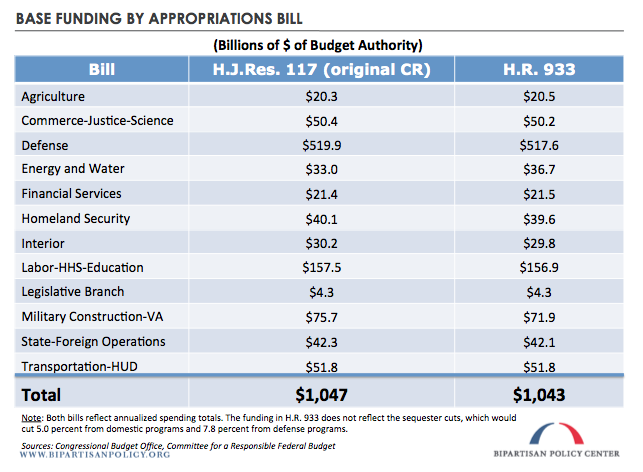 Although there were many micro funding changes contained in H.R. 933, each department as a whole will be funded at roughly the same level as before and then have the sequester cuts subtracted from those dollars. Waiving sequestration was not the goal of the legislation. Instead, a number of modifications were made to help certain departments manage the effects of the across-the-board cuts. Additionally, by appropriating amounts that are specifically intended for the present fiscal year in place of continuing last year’s appropriation, agency budgets are more likely to reflect current operational needs. (For example, under the CR, a structure that was completed using funding from FY 2012 would still be receiving unneeded construction funds for FY 2013).

Many of the adjustments, particularly in the appropriated portions of H.R. 933, serve to shift expenditures from slow- to quick-spending accounts. In effect, if done in the exact sequester amounts (which is not necessarily the case), this means protecting some programs from any reductions while others face a “double sequester” of sorts. Such a strategy allows the departments to prioritize spending on more immediate needs, like cash payments, operations, or maintenance, while implementing larger cuts for long-term projects ? e.g., construction ? that are not scheduled to start for some time, possibly even after the September 30 end of the fiscal year.

Below is a selection of notable reallocations:

1) In the Department of Defense (DoD) appropriations, roughly $10.4 billion was added to Operations and Maintenance (O&M), a section of the defense budget that spends out quickly and primarily addresses short-term needs. The same dollar amount was reduced from the procurement, research and development (R&D), and military personnel accounts (the last of which is notably exempt from the sequester). Procurement and R&D typically involve distinct outside contracts, which may be easier to delay or scale down than ongoing service activities. However, this increase to O&M is not expected to fully offset the sequester’s impact; given DoD’s stated intent to protect Overseas Contingency Operations (OCO) funding from the sequester, and using estimates from Major General Arnold Punaro (ret.) ? a visiting scholar at the Bipartisan Policy Center ? the cuts to base O&M funding for the remainder of the fiscal year will still likely be upwards of 10 percent.**

2) The law also made reductions in other defense areas, such as military construction ? mostly for the Army and Air Force ? which took a cut of roughly $2.8 billion. Given the slow-spending nature of construction projects, this appears to be a practical tradeoff that was made by policymakers in order to sustain funding that is scheduled to be spent out in the coming months, such as the Tuition Assistance Program (TAP) and general O&M.

3) This pattern of boosts to immediate priority, quick-spending areas paired with cuts to slow-spending accounts appears for a range of non-defense activities, too. The Special Supplemental Nutrition Program for Women, Infants, and Children (WIC) received an increase in its budget of about $400 million, allowing for continued, regular food support payments to this vulnerable population. Another example of restored funds is the Department of Energy’s Atomic Energy Defense Weapons Activities, which saw a funding increase of $350 million, likely (at least in part) in order to continue the nuclear waste cleanup at sites such as the Hanford Nuclear Reservation in eastern Washington, where a delay could have serious consequences. Both the WIC and energy program bump-ups described above will roughly allow for the continuation of previous service levels once the sequester cuts have been imposed.

In the opposite direction, H.R. 933 made relatively small reductions below CR levels to investments in the Department of Energy’s research programs for Energy Efficiency/Renewable Energy, Nuclear Energy, Advanced Research Projects, and Science. Those cuts will be “below and beyond” the sequester’s effects on those programs.

4) Some of the changes approved by the law were not necessarily reflective of the slow- to quick-spending shift, embodying other priorities instead. Several government activities that have been featured in the news recently received bump-ups in their allocations for the second half of FY 2013. As one example, the funding for services covered under the Meat Inspection Act, the Poultry Products Inspection Act, and the Egg Products Inspection Act was bolstered by approximately $55 million ? an increase of 5 percent ? which would roughly offset the impact of sequestration.*** Much publicity was directed at these services over the past few weeks as word circulated that a shortage of federal inspectors (who, according to the administration, would have faced furloughs due to the sequester) would have forced the shutdowns of some food processing facilities. Similarly, in the aftermath of the Benghazi embassy events, many have raised concerns over the level of resources that go towards protection of our ambassadors and other diplomatic personnel overseas. The budget for embassy security, construction, and maintenance in H.R. 933 was consequently bumped up by roughly $90 million, an amount that (post-sequester) leaves the account with slightly more funding than it had in the original FY 2013 CR.

Other priority shifts included the U.S. Customs and Border Protection receiving a $385 million salaries-and-expenses boost for automated systems programs, while the spending on general salaries and expenses was cut by approximately the same dollar amount. H.R. 933 also appropriated an additional $34 million and $46 million for expenditures under the Head Start Act and Child Care and Development Block Grant Act, respectively, to ameliorate a small portion of the impact of sequestration on those programs. 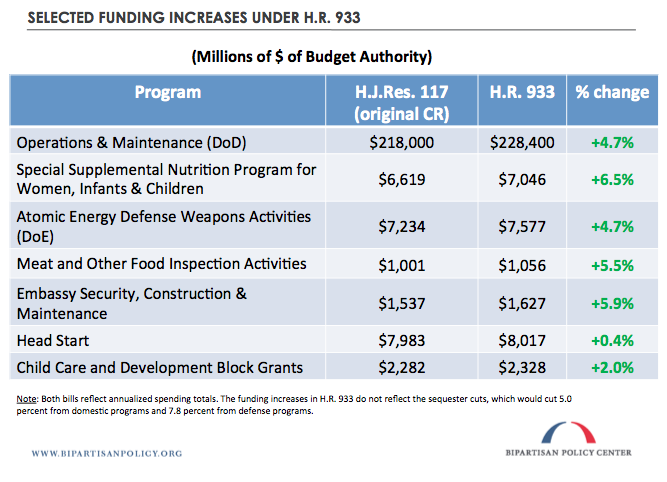 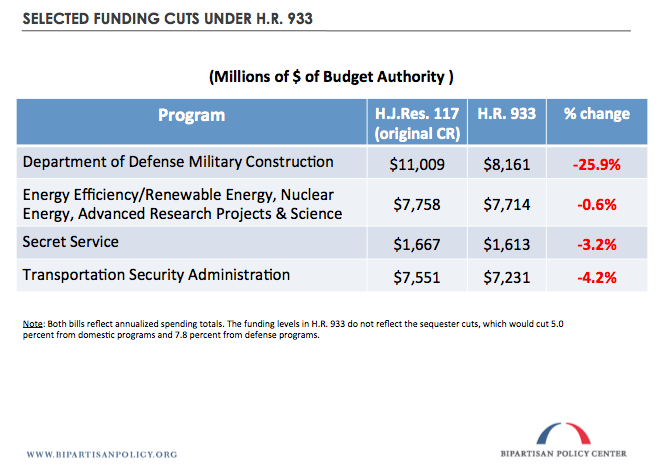 Even with the passage of this bill completing FY 2013 appropriations, crucial talks lie ahead. Importantly, aside from adjustments to specific areas, H.R. 933 provides no additional flexibility or general relief to departments regarding sequestration; across-the-board cuts will continue for all non-exempt accounts. Barring further congressional action, the sequester cuts will continue to take place and impact the economy this year, and then, per the original sequester provision, more cuts loom for eight years thereafter.

Perhaps some or most of these funds will be restored, but that possibility appears unlikely unless policymakers can come to a broader budget agreement, either by negotiating a compromise between the House– and Senate-passed budget resolutions, which diverge widely in proposed entitlement and tax changes, or with some other overarching fiscal framework. Otherwise, the federal government may be destined to continue along the suboptimal path of the last four years, approving stop-gap funding measures outside of regular order.

Special thanks to Major General Arnold Punaro (ret.), a BPC visiting scholar and principal at The Punaro Group, for helping us assess the impacts of H.R. 933 on military spending and operations.

* The sequestration effects are not factored into the figures, meaning that the cuts will be taken off of these appropriated amounts.

** This assumes that funds are being obligated roughly proportionally throughout the year. If DoD had been spending out base O+M funds at an accelerated pace ? as some, including General Punaro, believe was the case ? then its percentage cut for the remainder of the year could be even higher.