There’s no overlap between Democrats and Republicans in Congress today. What are the consequences?

Republicans and Democrats in Congress have always had ideological differences. But the two parties today are much further apart than they were a generation ago. Political analyst Norm Ornstein uses the metaphor of the political parties as teams on a football field.* Imagine members of Congress lined up on a football field with the Republican endzone on the right and the Democratic endzone on the left. In much of the twentieth century, you would have seen players from each party milling around the 50 yard line and some crossing over onto the other team’s side of the field. There were a lot of moderates and cross-party alliances on votes.

Today, that football field shows both parties firmly on their own side of the fifty yard line.

The chart below derived from Keith Pool and Howard Rosenthal’s D-W Nominate scores shows the voting patterns in the House of Representatives through three snapshots of particular Congresses in the 1980s, 1990s and 2000s.**

Today, there is no overlap between Republicans and Democrats in Congress. The most liberal Republican is to the right of the most conservative Democrat. 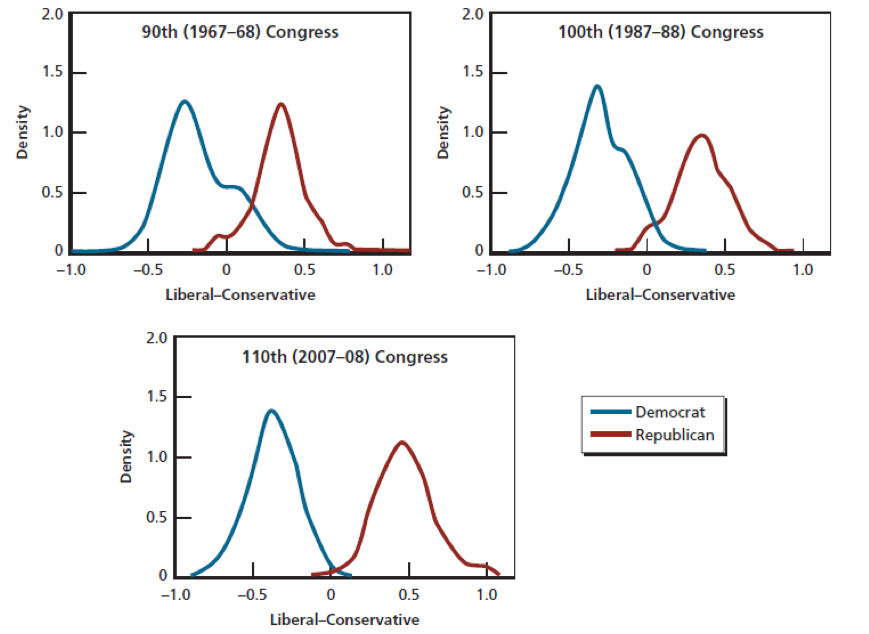 BPC’s Commission on Political Reform (CPR) will host the first of its national conversations at the Ronald Reagan Presidential Foundation and Library in Simi Valley, CA on March 6, 2013. USA TODAY’s Susan Page will moderate the discussion. At the event, CPR will aggregate comments and questions from the social web and incorporate them into the program in real time.

Do you have a question for the commission or policymakers in general? Please post it in the comments below. You can also tweet to us at @BPC_Bipartisan using the #EngageUSA hashtag or leave a message on our Facebook wall.