This week, President Obama signed the Protecting Affordable Coverage for Employees (PACE) Act into law, amending the Affordable Care Act (ACA) by blocking a provision that would have expanded the small group insurance market (50 employees or fewer) to include “mid-sized” businesses (51 to 100 employees). Insurance industry and business experts argued that redefining these groups would lead to disruption and double-digit premium increases for both. This most recent legislative change to the ACA is just one in a long list of revisions to the controversial law.

Almost from the start, Congress began enacting changes to the ACA. Some changes were technical, for example, clarifying that veterans’ and military health programs were considered qualified health insurance coverage for the purposes of the individual mandate. Other provisions were passed to quell political criticism or to serve as federal budget offsets to “pay for” legislation, such as the Medicare extenders. And perhaps the most public change to the ACA was the Supreme Court ruling in NFIB v. Sebelius, which effectively made the requirement to expand Medicaid to individuals below 138 percent of the federal poverty level a state option. Unquestionably, last week’s passage of the PACE Act was one of the more significant legislative changes to the law to date.

While many have believed bipartisan legislative changes to the ACA to be impossible before a new Congress and president are sworn into office in 2017, Congress took bipartisan action last week to block a potentially disruptive provision of the law. And as action over the past five-and-a-half years has shown, Congress can reach bipartisan agreement on changes to the ACA. The Bipartisan Policy Center has compiled a list of statutory changes to date that illustrate this point: 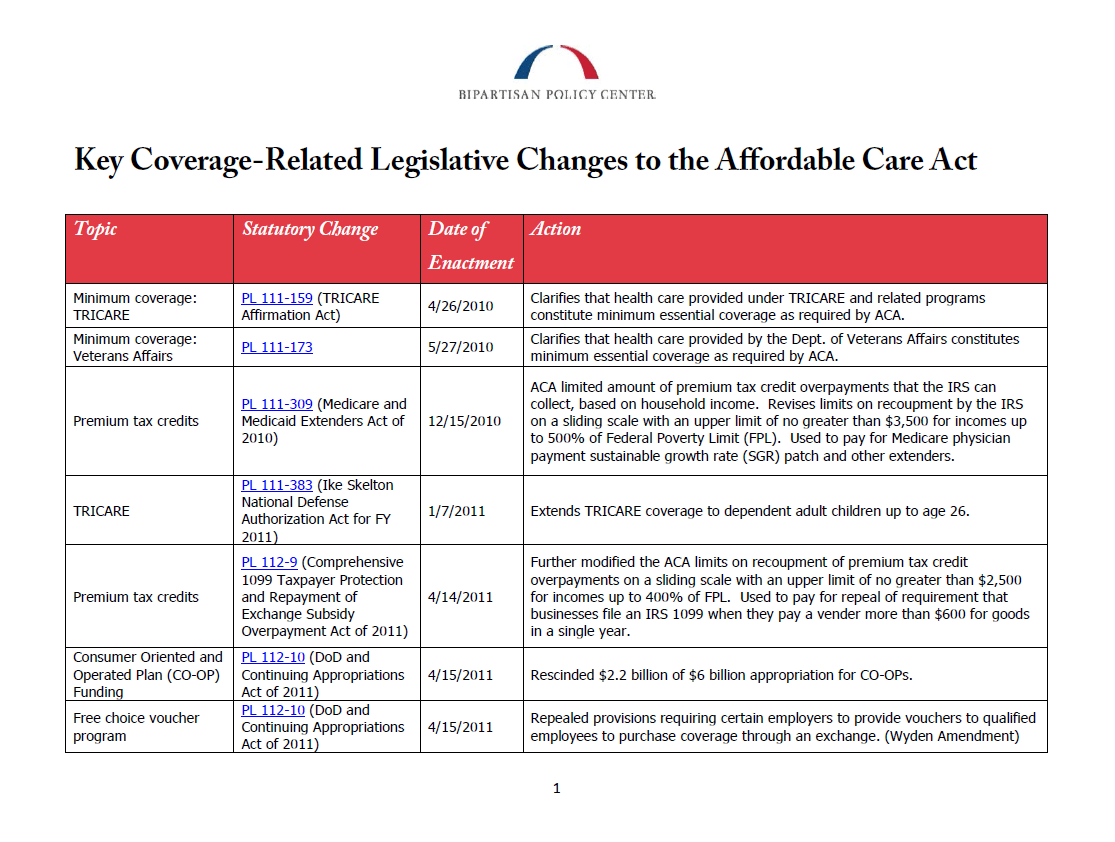 That said, the House Budget Committee is expected to report a reconciliation bill before the Columbus Day recess that repeals major parts of the ACA. The Senate is expected to pass the House reconciliation bill once it is received but the president will veto. With limited opportunities remaining in this Congress to modify the ACA in a bipartisan manner, the focus of further action will be at the agency level, particularly as states explore opportunities to seek waivers from parts of the law beginning next year.

A Prevention Prescription for Improving Health and Health Care in America

Transitioning to Organized Systems of Care: Medical Homes, Payment Bundles, and the Role of Fee-for-Service