Despite pleas from senior members of the American military, it now appears less probable that the Department of Defense will see a substantial budget increase for Fiscal Year 2018 (FY2018). While some analysts continue to predict a substantial increase in defense outlays in the next fiscal year, this expectation no longer conforms with the facts on the ground. The Defense Department’s recommendations for FY2019 and beyond (as a part of DoD’s Five Year Defense Plan), due out later this year, will likely request increased funding ? this request may fall, once again, upon deaf ears.

The Bipartisan Policy Center remains committed to reduced deficits, but continues to point out that the annual defense and non-defense appropriations bills comprise the smallest and slowest growing part of the federal budget. Entitlement reform, promptly enacted, would allow the government to invest in the future through defense and non-defense spending. While the BPC supports more defense spending, and the repeal of the Budget Control Act (BCA) in general, it is clear that forces are gathering that might keep a lid on the size and composition of defense appropriations. As the December 8 expiration date for the FY2018 spending bills approaches, three factors seem most likely to temper any defense spending increases:

Several other factors will weigh on deliberations. Renewed congressional interest in debating the Authorization for Use of Military Force (AUMF) further complicates forecasts of defense spending, as time spent on AUMF deliberations could distract from discussions of spending levels. In addition, Democrats demand that non-defense increases match that for defense. And, finally, insistence by many in Congress for an overall strategic vision from DoD.

Ironically, any congressional hesitation on substantially increasing defense spending occurs as U.S. conventional military superiority over potential adversaries declines. As we have outlined before, defense spending requests have shrunk by approximately $1 trillion from the FY2012 budget request of former Defense Secretary Robert Gates. This projected spending level was the “minimum necessary” for national security as the former defense secretary said (the last bipartisan National Defense Panel agreed with this assessment as well) ? further, this is the last spending projection to be logged before the Budget Control Act, and the sequester caps, took effect.

Defense spending requests have shrunk by approximately $1 trillion from the FY2012 budget.

Both House and Senate versions of the National Defense Authorization Act (NDAA) call for large increases in defense spending, well above the BCA sequester caps. The House has requested $631.6 billion for FY2018, while the Senate asks for $632 billion. The current statutory cap for defense in FY2018 is $549 billion. Both chambers, then, have tried to raise spending in FY2018 to near what Gates requested six years ago.

Such increases of around $83 billion in one year seem very unlikely. Even worse for defense would be another Continuing Resolution for FY2018, when the present C.R. expires on December 8. Testimony from every senior military official this year has warned that the use of such stop-gap measures makes long-term planning impossible. It also prevents elimination of outdated programs and the initiation of modern innovations. 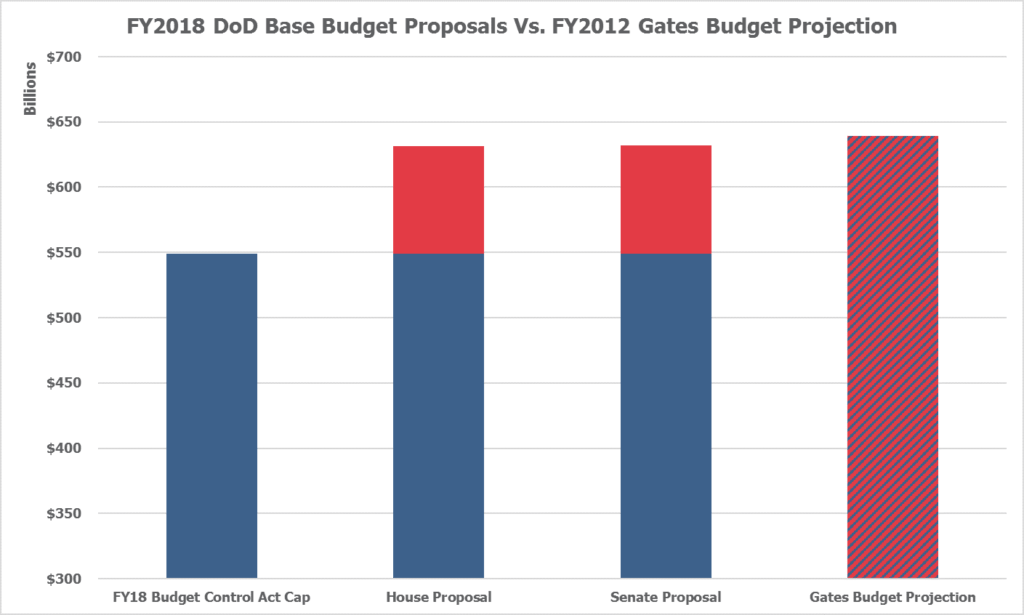 Opponents of higher defense spending levels argue that America spends more on its military than the defense spending of the next several nations combined. In nominal, unadjusted dollars this is true ? the U.S. apparently spends significantly more than our key competitors, namely Russia and China.

However, such nominal dollar-to-dollar comparisons distort reality. Purchasing power parity (PPP) analysis reveals that in 2016, China and Russia, combined, spent about $595 billion on military expenditures (adjusted for PPP), while the United States spent about $611 billion. These numbers are up significantly from 2000, when taken together Russia and China spent about $106 billion compared to $302 billion for the United States. For clarification, purchasing power parity, as defined by the IMF, is, “The rate at which the currency of one country would have to be converted into that of another country to buy the same amount of goods and services in each country.” In short, this conversion estimates the actual buying power of currencies relative to one another.

These expenditure figures are especially relevant in light of statements from Chairman of the Joint Chiefs of Staff Joseph Dunford, who has outlined how the gap between U.S. capabilities and the capabilities of Russia and China has shrunk over time. Further, the security environment in which the United States finds itself is significantly different than it was a decade ago, as General Dunford has stated: “While we tend to have a binary perspective of the security environment — that is, we’re either at peace or at war — state actors like Russia, China and Iran have a much more nuanced view. They operate in in a manner that avoids our strengths and takes advantage of our weaknesses.”

How Congress resolves the defense spending issue has critical consequences on the final form of the federal budget, America’s military readiness, and future deficits. Contrary to conventional wisdom, the defense hawks may find this winter proves cold, indeed.

Has Defense Spending Turned the Corner?