On June 25, 2013, President Obama announced a national Climate Action Plan which features regulations to cut carbon pollution from new and existing power plants. As the largest source of greenhouse gas (GHG) emissions in the U.S., the electric power sector emits a third of our total GHG emissions and is the next sector facing regulation, following efforts to reduce emissions from vehicles through fuel economy and GHG tailpipe standards.

With regard to new power plants, EPA has yet to finalize its first-ever national GHG performance standards for newly constructed power plants, which were first proposed in the spring of 2012 (discussed here) and were due to be finalized within one year. That proposal’s fuel-neutral standard grouped coal plants in the same category as natural gas-fired generation. In doing so, the proposal drew criticism for straying from EPA’s historic use of subcategories, which typically allow a less stringent standard for higher-emitting coal generation. The Presidential Memorandum indicates that EPA plans to issue a new proposal, which was just sent to the Office of Management and Budget for pre-publication interagency review. The president’s memo, which does not specify whether the replacement proposal will include a less stringent standard for coal-fired generators, directs EPA to issue proposed standards by September 20, 2013.

Once a new source performance standard (NSPS) has been established (for a pollutant that is not regulated elsewhere as a criteria or toxic pollutant), the Clean Air Act directs EPA to issue guidance on standards for the existing fleet of, in this case, power plants. The Act establishes a cooperative approach between the EPA and states for implementation of these standards. EPA remains responsible for the standards for new sources, as well as for existing sources that undertake modifications, while each state is asked to follow EPA guidelines to develop and submit plans to reduce emissions from the existing power sector. The Presidential Memo directs EPA to issue a proposed rulemaking(s) to address carbon pollution from modified, reconstructed, and existing power plants by June 2014 and a final rule(s) by June 2015. According to the memo, EPA rules would require state implementation plans to be submitted to EPA by June 2016.

Click on the image to view a larger version 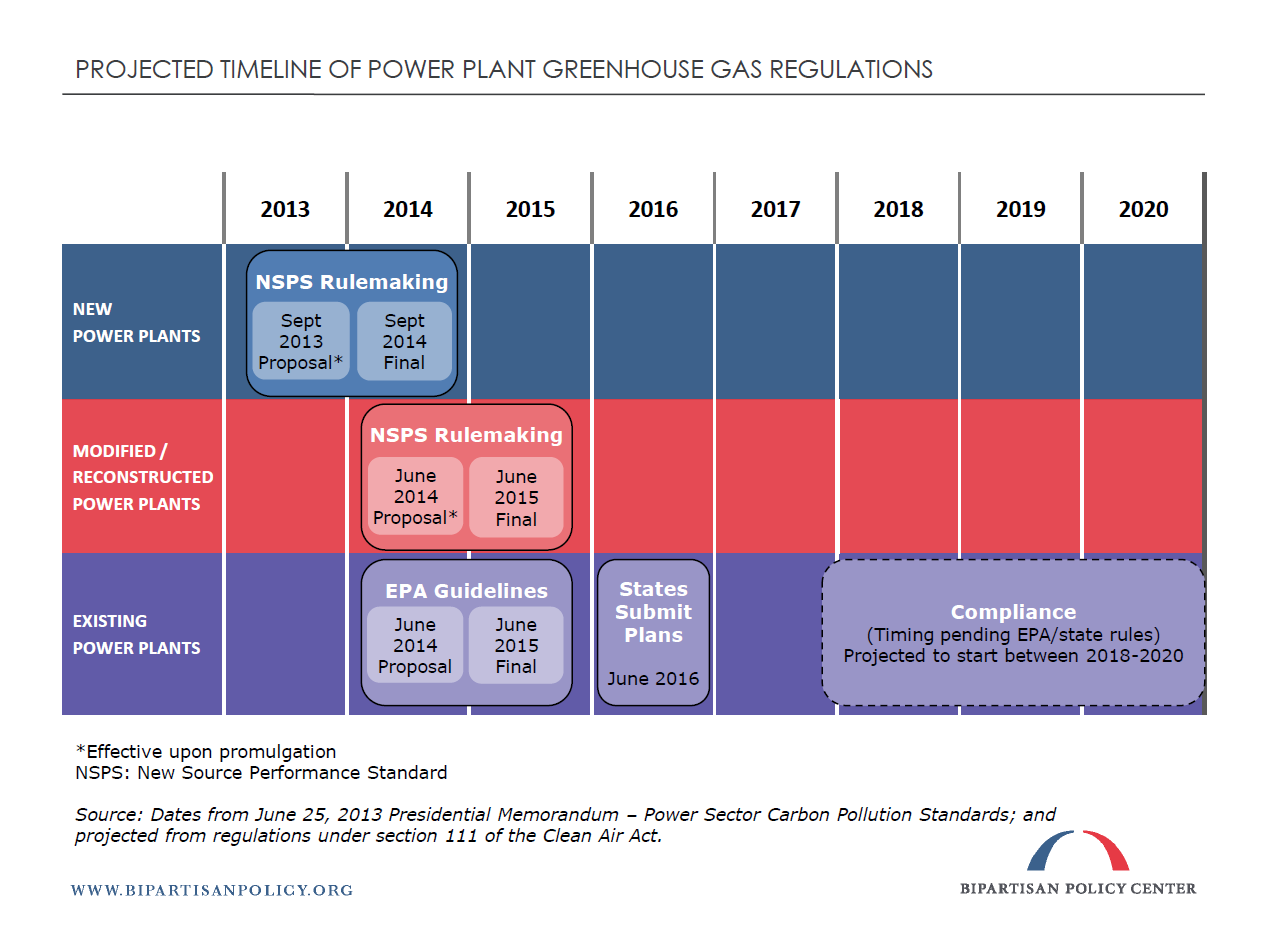 The president called for EPA to work with states, industry, and other stakeholders in developing carbon pollution standards that build on state leadership, provide flexibility, and take advantage of a wide range of energy sources. A stakeholder process would offer an opportunity to converge on some common ground and draw from existing efforts at the utility, state, and regional level to reduce power sector emissions. There is no shortage of legal, technical, and implementation issues to sort out, as well as political land mines to navigate with respect to GHG performance standards. As discussed here, important issues include the basis and stringency of the standards, options to incorporate implementation flexibility, interactions between GHG performance standards and existing state programs, the assessment of state equivalency, options for multi-state coordination, baseline year(s) and treatment of early actions, monitoring and verification of emission reductions, and broadly, the policy design, implementation, and enforcement of existing source GHG performance standards.

A key question will be whether EPA and the states narrowly focus on options to improve the efficiency of existing power plants and promote co-firing of lower emitting fuels or whether the standards will encourage, and potentially rely on, broader strategies to reduce GHG emissions, such as shifting generation to renewable energy and reducing electric demand with end-use efficiency. Energy efficiency improvements in end-use sectors throughout the economy offer opportunities to boost energy productivity by reducing the amount of electricity needed to achieve the same output, and also reduce the emissions generated from power plants. Many economists suggest a broader, flexible approach — which allows, for example, reduction strategies that reduce electric demand — has the potential for lower cost emission reductions. However, there is no consensus among Clean Air Act experts on whether a broader interpretation is permissible under the Act, particularly with respect to establishing the stringency of performance standards.

There are divergent views on the basis for establishing the level of stringency of power plant GHG performance standards. However, there is a growing interest among diverse stakeholders in exploring flexible options for implementing these standards. Some of these options would build on state successes in reducing power sector GHG emissions and unleash the lowest cost GHG reduction options for compliance.

State environment and energy regulators will play an important role in the regulation of existing power plants and can help shape the EPA guidelines by sharing experiences with current and planned efforts to reduce power sector GHG emissions. There may be tension between the desire for flexibility to accommodate each state’s unique situation and an interest in some level of synchronization to facilitate companies, markets, and, potentially, reduction strategies that span state borders. An understanding of the potential emission reduction options and policy mechanisms available will help illuminate which aspects of state plans are most amenable to state-specific approaches and which areas might benefit from cross-state coordination.

With multiple interests at stake, potentially significant impacts on the system that powers our economy, and numerous options and decision points, there is a need for objective information and rational discussion of the path forward. The Bipartisan Policy Center will continue to offer fact-based analysis and objective insights, as well as to foster reasoned, bipartisan discussions to shed light on these important issues in the coming months.