Below is our summary of Chairman Paul Ryan’s budget, which was released last week. All of the information about Chairman Ryan’s budget proposal is taken directly from either The Path to Prosperity: Restoring America’s Promise (not to be confused with the Bipartisan Policy Center’s report, Restoring America’s Future) or the Congressional Budget Office’s Long-Term Analysis of a Budget Proposal by Chairman Ryan. We hope that this comprehensive summary will be helpful and further clarify the entirety of his plan.

Medicaid Beginning in 2013, instead of the current shared-financing system between the states and federal government, the federal share of Medicaid would be allocated to the states through block grants.

From the CBO’s analysis of Chairman Ryan’s budget, “Starting in 2022, Medicaid block grant payments would be reduced to exclude projected spending for acute care services or Medicare premiums and cost sharing paid by Medicaid.”

Repeal the Affordable Care Act’s (ACAs) expansion of Medicaid that would extend coverage to most nonelderly people with incomes below 138 percent of the federal poverty level. Medicare Starting in 2022, for newly eligible beneficiaries, Chairman Ryan’s budget would convert Medicare into a premium support system. Instead of automatically being enrolled in traditional fee-for-service Medicare, these new beneficiaries would be entitled to a premium support payment to help them purchase private health insurance on a newly established, regulated Medicare exchange, similar in structure to those created by the Affordable Care Act. The premium support payments given to incoming beneficiaries would increase annually with inflation, or approximately 2.3% according to the CBO. For comparison, Medicare spending per beneficiary is projected to grow annually at approximately 5%. 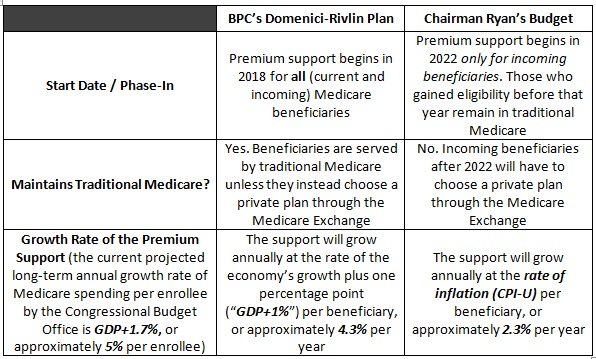 Beginning in 2022, the federal government would establish a medical savings account (MSA) for certain beneficiaries with low income. The amount of the federal contribution would grow annually with inflation, or approximately 2.3%, on average. Again, for comparison, Medicare spending per beneficiary is projected to grow annually at approximately 5%.

Beginning in 2022, the Chairman’s plan will increase the eligibility age for Medicare by two months per year until it reaches 67 in 2033. According to the CBO, “On the basis of the specification provided by Chairman Ryan’s staff, CBO’s analysis included no change in the sustainable growth rate mechanism for payments to physicians under Medicare.” [emphasis added]

But, his proposal maintains the various cuts to Medicare enacted in the ACA. Chairman Ryan’s treatment of the so-called “Cadillac Tax” on high-cost employer-provided health plans is unclear. Other Health Tort Reform ? Caps noneconomic and punitive damages. Social Security Chairman Ryan does not make specific proposals for Social Security, but calls for a bipartisan process whereby both the President and congressional leaders would have to submit plans to restore the program to balance. Taxes While he does not include a detailed proposal, Chairman Ryan indicates that he wants to achieve revenue-neutral tax reform (from a current policy baseline) that lowers the top individual and corporate rates to 25% while broadening the base through the elimination or reform of most deductions and credits. Other Spending For the CBO scoring, Chairman Ryan simply specifies a path for the combination of spending on other mandatory programs (e.g., federal civilian and military retirement, most veteran’s programs, agriculture support, food stamps, unemployment compensation, and Supplemental Security Income) and total discretionary spending.

Although Chairman Ryan’s Path to Prosperity does not specify a comprehensive list of spending cuts that would achieve these targets, he does lay out some policies.

Non-security discretionary spending is reduced to below 2008 levels for Fiscal Year 2012, then frozen for five years, then held to growth at inflation indefinitely. Some specific proposals include: