The days of declining deficits have come to an end.

The Congressional Budget Office (CBO) projects that the deficit for Fiscal Year (FY) 2016 will be $544 billion, a 24 percent increase from FY 2015. This marks the first fiscal year in which deficits, the annual excess of federal government spending over revenue collected, will be rising, both in absolute dollar terms and as a percent of gross domestic product (GDP), since 2009.

Deficits swelled to well over one trillion dollars after the 2008 financial crisis, largely due to depressed tax revenue and increased spending on emergency measures, such as extended unemployment insurance and nutritional assistance benefits. Each year since, the deficit has declined as the economy recovered?causing tax revenue and spending to return to more typical levels?and policymakers imposed some modest fiscal restraint.

Yet projected deficits remain substantial. Two major reasons are the rising cost of health care and the retirement of the baby boomers, which are greatly increasing spending on programs like Social Security and Medicare. Combined, the costs of Social Security and major health programs are projected to grow by almost 2 percent of GDP over the next decade. 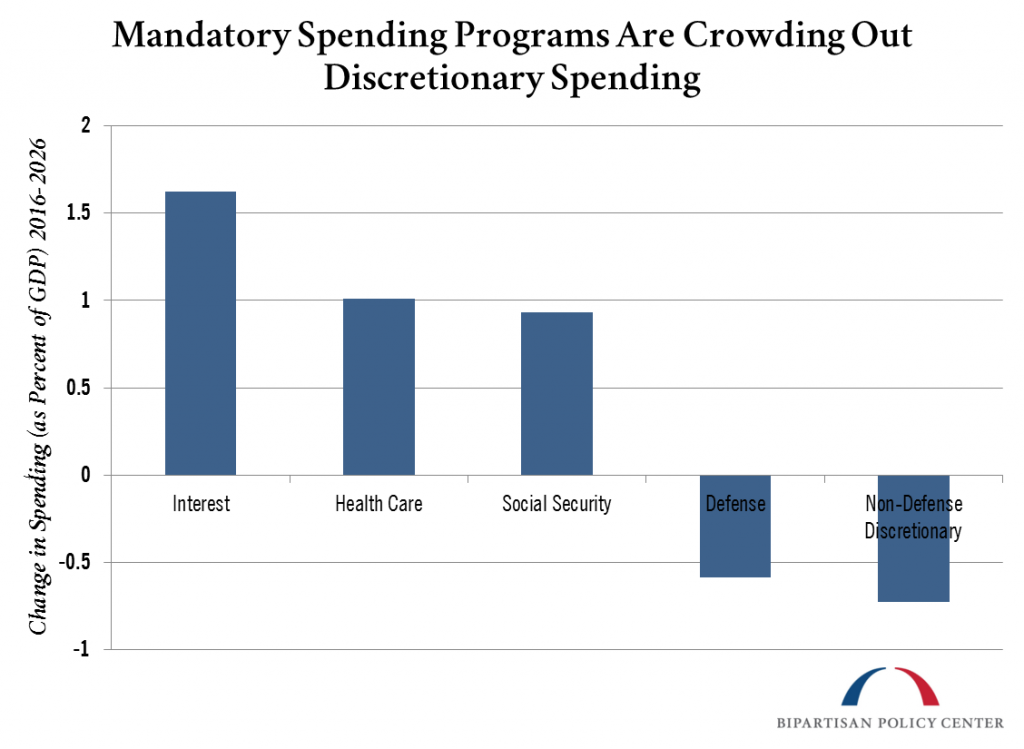 By the end of the decade, the combination of stagnant revenues and growing spending will lead to a deficit of nearly 5 percent of GDP?almost twice what it was in 2015. In 2026, CBO projects publicly held debt would total more than 86 percent of GDP?the highest level seen since the end of World War II. This increased debt level, combined with rising interest rates that generally accompany an expanding economy, are projected to double annual interest costs (as a percent of GDP) by 2026.

Despite growth in total spending, discretionary spending?the part of the budget that Congress appropriates annually for defense and domestic needs?is on track to decline from 6.5 percent of GDP today to just over 5 percent in 2026. Such a level would not only be well below the historical average; it would be the lowest in over four decades. With the country facing many security challenges and significant infrastructure needs at home, these spending levels would be irresponsible if they were to materialize. 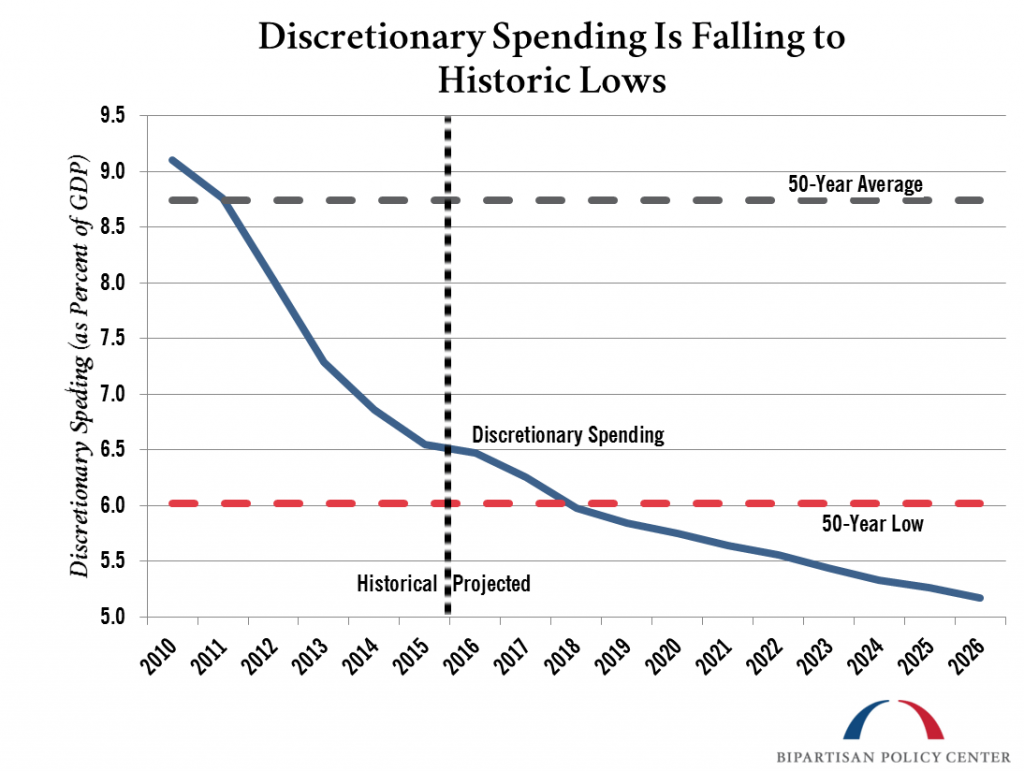 One major factor in the decline of both defense and non-defense discretionary spending is the sequester-level spending caps imposed by the Budget Control Act of 2011. Policymakers recently increased these caps for two years as part of the Bipartisan Budget Act of 2015, but under current law, the more stringent limitations will go back into effect on October 1, 2017. If policymakers lift these limits again without offsetting their costs, both debt and annual deficits would be even higher at the end of the decade than the levels projected in CBO’s report. As BPC has long argued, the sequester caps should be replaced with what they were originally designed to encourage: thoughtful reforms to entitlement programs and tax reform that spurs economic growth.

Unfortunately, rather than make such changes, policymakers have recently acted repeatedly to worsen the deficit. At the end of 2015, Congress enacted a massive package of tax cuts which added $800 billion to the public debt. Before that, policymakers heavily relied on gimmicks to offset spending increases associated with both the Bipartisan Budget Act and a six-year highway bill. In early 2015, a major reform to Medicare physician-payment policy included spending increases that were only partially offset. Fiscal projections now look substantially worse than they did just last year, let alone in 2010, when a new Congress was elected on campaign promises to rein in deficits. 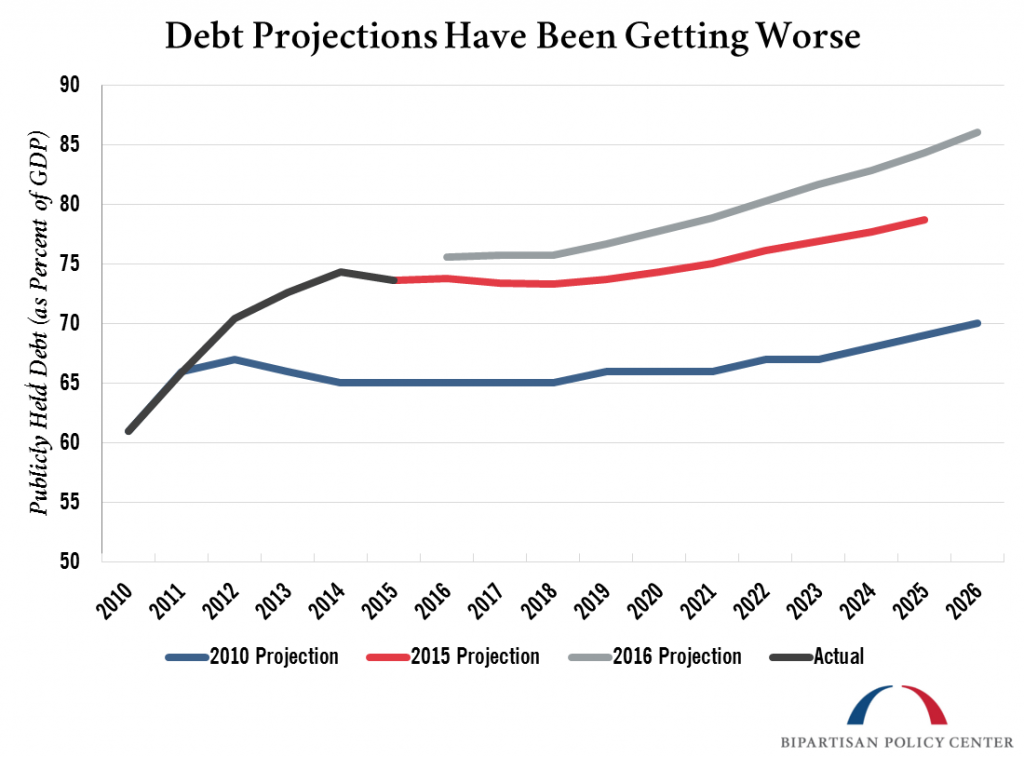 The current state of the presidential campaign only adds to these concerns. Whereas President Obama and Mitt Romney sparred over competing proposals to contain the deficit back in 2012, candidates today are hardly even paying lip service to the issue. Instead, leading contenders in both parties are proposing massive new entitlement programs and huge tax cut packages with financing mechanisms that are unrealistic at best.

Policymakers are not lacking potential solutions. Individuals and organizations from across the political spectrum have proposed ways to stabilize the public debt without sacrificing economic growth; in fact, if done prudently, the two would be complementary. The CBO report is a stark reminder that time is of the essence for policymakers to get serious and address the fiscal challenges facing our country.