Last week, the Congressional Budget Office (CBO) released its cost estimate for H.R. 2131, the Supplying Knowledge-based Immigrants and Lifting Levels of STEM Visa Act (SKILLS Visa Act), in conjunction with the Joint Committee on Taxation (JCT). The SKILLS Visa Act was voted out of the House Judiciary Committee on June 27, 2013, by a 20-14 margin.

The SKILLS Visa Act proposes to increase higher-skilled, employment-based immigration through changes to both employment and family-based green card categories, as well as the non-immigrant (temporary) H-1B program for specialty occupations. The changes are broadly similar to those contained in the Senate’s June 2013 bill, the Border Security, Economic opportunity, and Immigration Modernization Act (S.744). Some of the key changes include:

Typically, CBO does not incorporate macroeconomic effects in cost estimates for legislation, and assumes that variables such as gross domestic product (GDP) and employment remain fixed as projected under current law. However, because the SKILLS Visa Act “would materially increase the size of the U.S. labor force, CBO and JCT relaxed that assumption by incorporating?their projections of the direct effects of the bill on the U.S. population, employment and taxable compensation.”

CBO estimates that enacting H.R. 2131 would have significant budgetary effects in the next two decades. Between fiscal years (FYs) 2014 ? 2024, the Act would increase federal revenues by $118 billion and direct spending by $8 billion, therefore reducing deficits by $110 billion. In the second decade, CBO estimates that the Act would continue to boost revenues by over $400 billion and reduce deficits by about the same amount.

Direct Spending. Between fiscal years 2014 ? 2024, new costs to the federal government would primarily come from increased spending on earned income and child tax credits ($6 billion) and health insurance subsidies ($1.4 billion), as well as additional spending on other benefit programs such as unemployment insurance ($810 million) and Social Security ($237 million). CBO explains that increased spending on federal tax credits and insurance subsidies will occur mainly as a result of the population increase from the initial uptick in family-sponsored immigrants who tend to have lower wages and incomes and are less likely to have access to employment-based health insurance. CBO also expects about $100 million in discretionary costs from Department of Homeland Security (DHS) and State Department start-up administrative expenses and increased Pell Grant program spending. 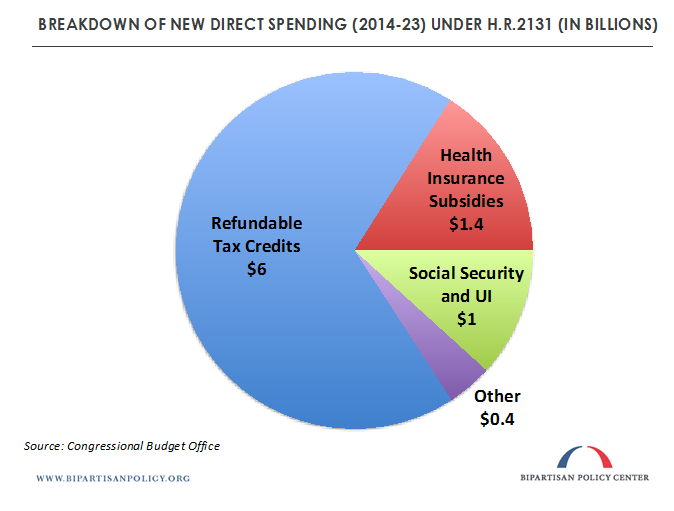 CBO estimates a small reduction in spending during the second decade because fewer foreign-born individuals would be eligible for refundable tax credits and federal health care programs in the United States than under current law. Between FY 2025 and FY 2034, the increase in the population due to the bill would be about the same as fiscal years 2014?2024?an estimated 1 million additional immigrants?but the composition of the increase would shift. Starting in 2024, family-sponsored immigration is reduced with the elimination of 65,000 visas available to siblings of U.S. citizens (and their dependents). Meanwhile, the cumulative number of employment-based, highly skilled immigrants with higher incomes who could enter the country under this bill but not under current law would continue to increase. CBO explains that, “[t]he reduction in spending for those programs would more than offset the increase in spending for other programs?notably Social Security and Medicare?that would result from the larger number of people who would be in the United States.”

Revenue. The $118 billion in increased revenues in the first decade almost entirely reflects the additional collection of income and payroll taxes ($117 billion) from the additional workers in the labor force. CBO projects that H.R. 2131 would increase the labor force size by 850,000 by FY 2024 and by about 1 million by FY 2034. Increased visa and application fees will add up to only $70 million of new revenue by FY 2024. 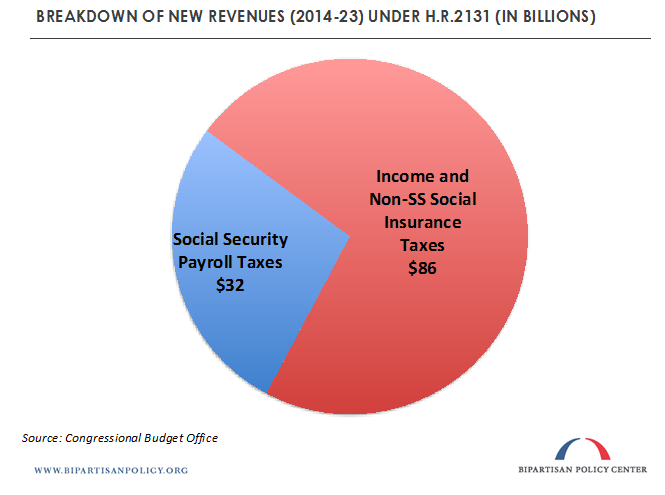 In 2013, The Bipartisan Policy Center (BPC) released a comprehensive assessment of immigration reform’s economic and budgetary impacts. The study, Immigration Reform: Implications for Growth, Budgets, and Housing, measured the impacts of the Border Security, Economic Opportunity, and Immigration Modernization Act (S. 744) and used it as a “reference case” case against which alternative scenarios, or “sensitivity analyses,” were compared. One such scenario examined how economic outcomes would change if S.744 more heavily emphasized employment-based immigration, similar to the SKILLS Visa Act. The results showed the opportunity for higher deficit reduction and faster GDP growth when compared to the reference case. Read the full results of the study here.

The CBO score of H.R. 2131 confirms what BPC and previous CBO research has found: immigration reform has the potential to have broad economic and fiscal benefits. Equally encouraging, the SKILLS Visa Act makes changes to the legal immigration system that are broadly similar to provisions contained in S.744, suggesting that there is room for the House and Senate to agree on a framework in this area. We are hopeful that the positive economic news will encourage the House to begin bringing its immigration proposals to the floor.