The 2017 year-end tax cuts and the spending increases in last month’s budget (busting) deal added insult to injury for the country’s already ominous fiscal outlook, the Congressional Budget Office (CBO) confirmed in its most recent report. When combined with an aging population and increasing interest payments on the federal debt, the U.S. government will soon be running trillion-dollar deficits. And this time ? absent serious action by our elected leaders ? they’re here to stay.

That is the underlying message of the Budget and Economic Outlook, an annual report from the non-partisan CBO. The new projections corroborate analysis by BPC’s economic policy team, which has forecast impending deficit increases since last year.

How did our fiscal trajectory become so bleak, and why should policymakers and the public care?

A Long History of Growing Debt

When CBO published its mid-2017 update, the projections were far from rosy. The combination of the baby boomers phasing into retirement and ever rising health care costs have produced a systemic imbalance between the federal government’s spending and revenues. The Great Recession, military conflicts overseas, prior tax cuts, and other policy changes have also contributed to the steadily rising national debt.

Even before recent policy actions, CBO estimated last June that deficits would exceed $1 trillion by Fiscal Year (FY) 2022. Now, that infamous milestone is expected to be crossed in FY2020 (and could happen as early as next year, for which CBO’s deficit projection clocks in at $981 billion).

The chart below shows how the current law debt outlook has steadily worsened over the past six years. Since the Budget Control Act of 2011, CBO’s baseline debt projections have been trending up, but the latest estimates are notably worse. At 96 percent of gross domestic product (GDP), debt held by the public is projected to be nearly the size of the whole economy in 2028, which astoundingly is close to 40 percentage points higher than CBO’s 2012 projection for the same year. 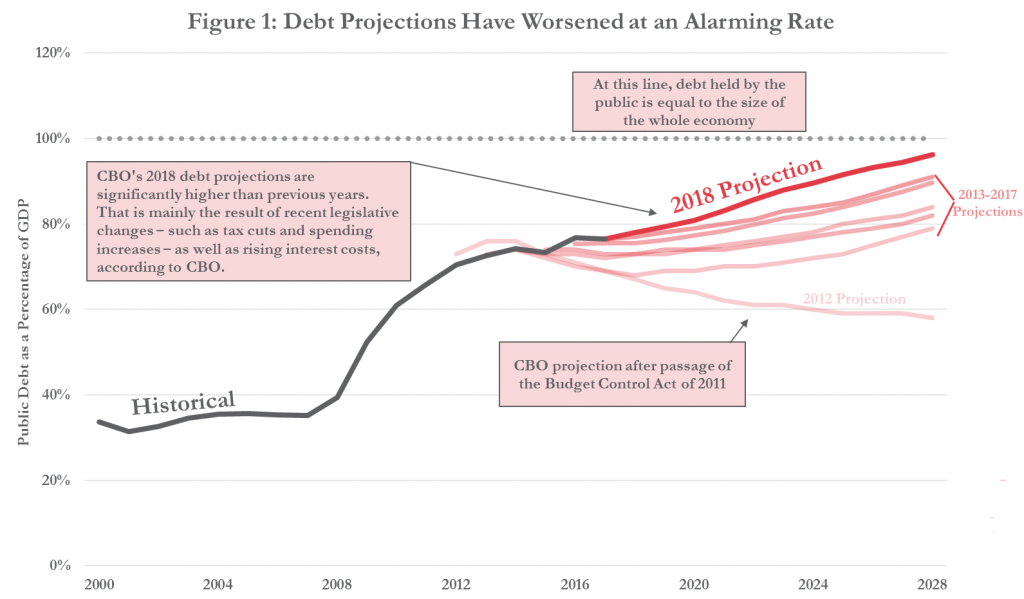 The most troubling news is that this is the conservative picture of where the United States is headed. CBO attributes the increase in this year’s debt projections to a few main factors: The Tax Cut and Jobs Act, the Bipartisan Budget Act of 2018, and increasing interest payments on the federal debt. Should the tax cuts and spending increases be extended, CBO’s alternative (and more realistic) fiscal scenario shows that debt would exceed the size of the economy in 2028 (105 percent of GDP), with deficits crossing the $2 trillion watermark in the same year. If this scenario plays out, interest payments at that point would consume 32 percent of all income tax revenue, meaning nearly one in every three dollars Americans pay in income taxes would be used solely to service outstanding debt. 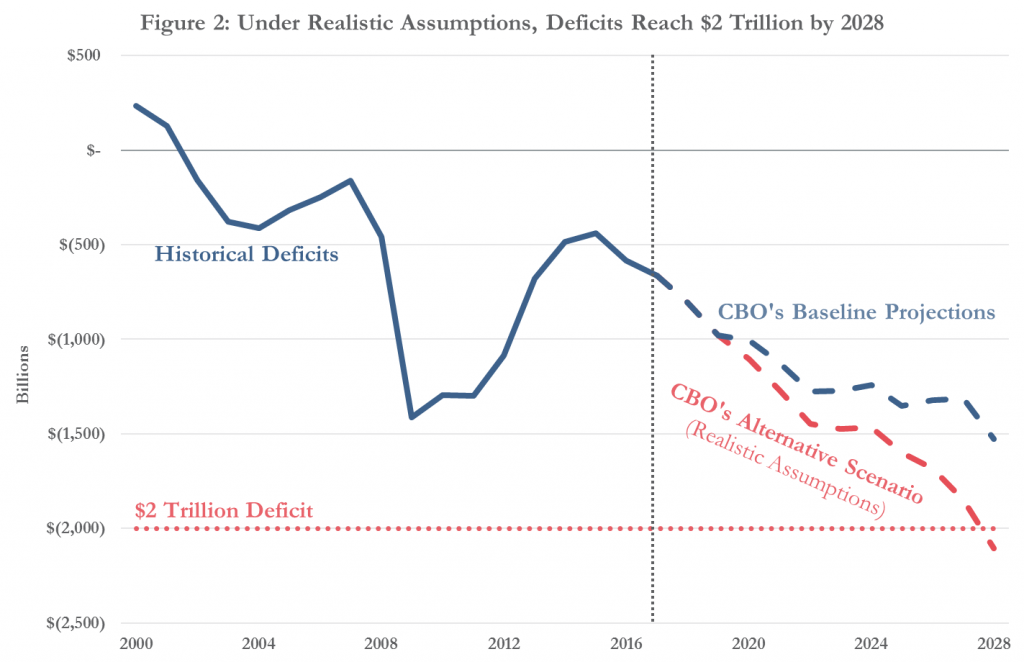 Normally, this type of troubling fiscal picture is the temporary result of an economic downturn, but this time, the indefinite expansion of the nation’s debt comes deep into an economic expansion, when debt (as a share of the economy) is usually stabilizing or on a downward path. 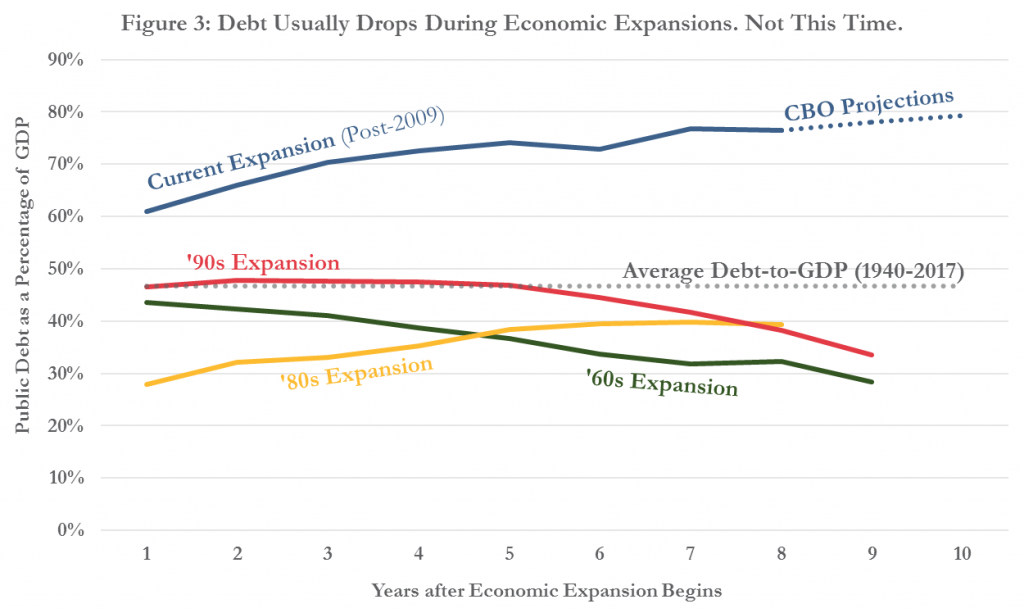 So, the state of the U.S. debt problem is bad and getting worse. But why does expanding debt matter?

There are a few key ways that fiscal irresponsibility could adversely impact younger generations:

First, rapidly expanding debt will depress economic growth over time and could potentially lead to a fiscal crisis if borrowers lose faith in the country’s ability to repay. CBO projects that the recent tax cuts and additional government spending will spike economic growth up to 3.3 percent in FY 2018 (an estimate that is significantly higher than the Blue Chip consensus forecast), but over time, growth is projected to wane below 2 percent per year. There are multiple causes, but most notably CBO expects that increased government borrowing will slowly crowd out private investment in the coming years. All else equal, this increased borrowing will exert downward pressure on the economy’s long-term growth.

Second, rapidly increasing debt constrains the government’s ability to effectively respond to emergencies, such as recessions, wars, or natural disasters. The Great Recession, wars in Iraq and Afghanistan, hurricanes like Katrina and Sandy, the rise of ISIS; all of these events ? which would later become large federal spending items ? happened unexpectedly. Thankfully, none of them happened while debt was at dangerous levels, but if the U.S. remains on its current course, that may not be the case by the middle of the next decade. Increasing debt will make it more difficult to sufficiently fund these types of emergencies, certainly without dramatically curtailing important domestic programs or raising taxes, the costs of which would fall mostly on younger generations.

The U.S. government will soon be running trillion-dollar deficits and this time ? absent serious action by our elected leaders ? they’re here to stay.

Third, as government debt grows and interest rates rise, interest payments on federal debt will exponentially increase and will make up a growing portion of federal spending, crowding out priorities like defense, investment, and safety net programs. By 2026, CBO’s realistic scenario shows interest payments on the federal debt that exceed total defense spending. By 2028, those payments could reach nearly $1 trillion (more than 3 percent of U.S. GDP!). Americans receive no direct service or benefit for the tax dollars that go to servicing our debt, which will ultimately fall to the next generation.

CBO leaves little doubt that the U.S. is on an unsustainable fiscal path, and further, that the recent unfunded tax cuts and spending increases have only made matters worse. What neither CBO nor anyone else can predict is exactly when the situation will turn from merely “unsustainable” to “economically dangerous,” with the potential for serious adverse consequences on economic growth and Americans’ day-to-day financial lives.

Perhaps the recently established Joint Select Committee on Budget and Appropriations process reform will help Congress adjust the incentives it faces and lead to better fiscal outcomes. But no process changes can avert the pressing need for tough decisions on how much the federal government raises in taxes and where it spends those dollars.

The clock is ticking.

Sandy Davis & Shai Akabas: Congress, the CBO Is Not Your Football

Coming Soon: Another Step Toward $1 Trillion Deficits in FY2019