Today is the first day in which the U.S. House of Representatives may consider appropriations bills for Fiscal Year 2017. (The Congressional Budget Act of 1974 prohibits consideration of appropriations bills in that chamber before May 15 absent the adoption of a budget resolution.)

Congress and the president are supposed to enact 12 appropriations bills by October 1 each year (the start of the next fiscal year) to fund all discretionary spending programs (i.e., those which have spending that is not predetermined by formula). But in practice, lawmakers have been far more likely to miss their October 1 deadline than meet it. 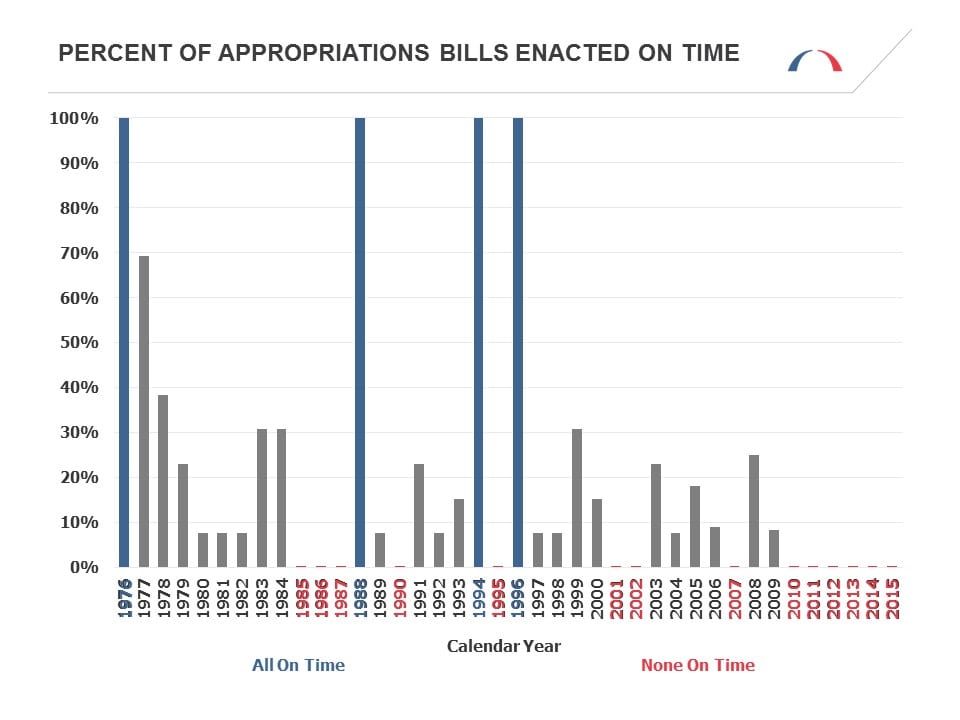 Appropriations bills can often be delayed by non-spending, non-budget related amendments and disagreements between the two chambers. But on a more fundamental level, they can also stall over disagreements about aggregate spending levels, which are supposed to be determined by a budget resolution.

The Bipartisan Budget Act of 2015 set discretionary spending levels for two years which, in theory, should have simplified the appropriations process and allowed lawmakers to begin their work earlier. Indeed the Senate, unbound by the May 15 restriction, has proceeded to consider appropriation bills and have adopted one already. However, with lawmakers unable to even agree to a concurrent budget resolution consistent with the previously agreed-upon levels, 2016 seems unlikely to be the year that Congress breaks its two-decade losing streak.

The failure to appropriate on time has significant consequences. In most years when appropriations have not been enacted by the start of the next fiscal year, lawmakers have passed a continuing resolution (which funds the federal government at the previous year’s levels). This creates uncertainty for federal agencies and makes it difficult for them to formulate long-term plans. A study conducted by the Government Accountability Office in 2013 found that many agencies delayed hiring or awarding contracts when being funded by a CR, which in turn, increased costs and hampered their ability to provide services.

But those consequences pale in comparison to what happens when lawmakers pass neither appropriations legislation nor a CR by October 1: a partial government shutdown. This last occurred in 2013 for a period of 16 days. While that may not sound like long, the shutdown was estimated to cost the federal government upwards of $2 billion and reduced gross domestic product by 0.3 percentage points, the equivalent of tens of billions of dollars in lost productivity.

As stagnant revenues and growing mandatory spending programs further limit the resources available to fund discretionary spending, passing timely appropriations bills will become even harder. Despite these challenges, lawmakers in both chambers are at least attempting to pass some (or all) appropriations bills on time this year. It’s a laudable goal, but if past is prologue, also one they may have difficulty achieving.

Want to try your hand at crafting a budget? Check out the Federal Balancing Act Interactive Budget Simulator developed by the Bipartisan Policy Center and Engaged Public.