Last week, the Congressional Budget Office (CBO) released its much-anticipated cost estimate and economic impact projection for S.744, the Border Security, Economic Opportunity, and Immigration Modernization Act, in conjunction with the Joint Committee on Taxation (JCT).* The two reports add non-partisan, objective analysis to the discussion, providing estimates of the budgetary and broader economic implications of the Act over the next two decades.

The main goals of the bill are to address the status of the undocumented immigrants currently residing within the United States, to reform our immigrant and non-immigrant visa systems to better reflect the needs of immigrants and the American people, and to secure our border and enhance efforts to enforce our immigration laws.

For almost all of its cost estimates, CBO assumes that gross domestic product (GDP) and employment levels remain fixed as projected under current law. However, CBO explains that “because S. 744 would significantly increase the size of the U.S. labor force, CBO and JCT relaxed [these assumptions] by incorporating in this cost estimate their projection of the direct effects of the bill on the U.S. population, employment, and taxable compensation.” Nevertheless, to remain as consistent as possible with its standard scorekeeping procedures, CBO’s main cost estimate does not incorporate every economic impact of the bill. To provide a more accurate picture of the legislation’s full budgetary ramifications, though, CBO separately estimates the deficit impact of the bill incorporating the full array of economic effects.**

Over the first decade ? Fiscal Year (FYs) 2014-2023 ? CBO estimates that S.744 would increase federal revenues by $459 billion and direct spending by $262 billion, thus reducing deficits by $197 billion.***  Additionally, in the second decade (FYs 2024-2033), CBO projects that the legislation would increase revenues by $1.5 trillion, direct spending by $810 billion, and impose additional discretionary costs of $20-$25 billion – on net reducing federal deficits by almost $700 billion.**** Including the full economic effects of the bill, however, CBO estimates that the Act would reduce deficits by roughly $1 trillion from FYs 2024-2033.

Given that the newly legalized immigrants would by and large not become eligible for most federal benefits for 10-15 years, many expected the second ten years to have a less positive budget impact than the first ten, particularly toward the end of the second decade. However, CBO actually projects that annual deficit reduction would be growing at the end of the 20-year period.

The increased revenue over the first decade ($459 billion) is generated almost entirely by income and payroll taxes paid by the additional labor force participants and some of the newly-legalized workers currently in America. These revenues would be collected from both new immigrants and previously unauthorized individuals. Only about $2 billion of this would be raised through visa fees, penalties, and travel promotion fees. 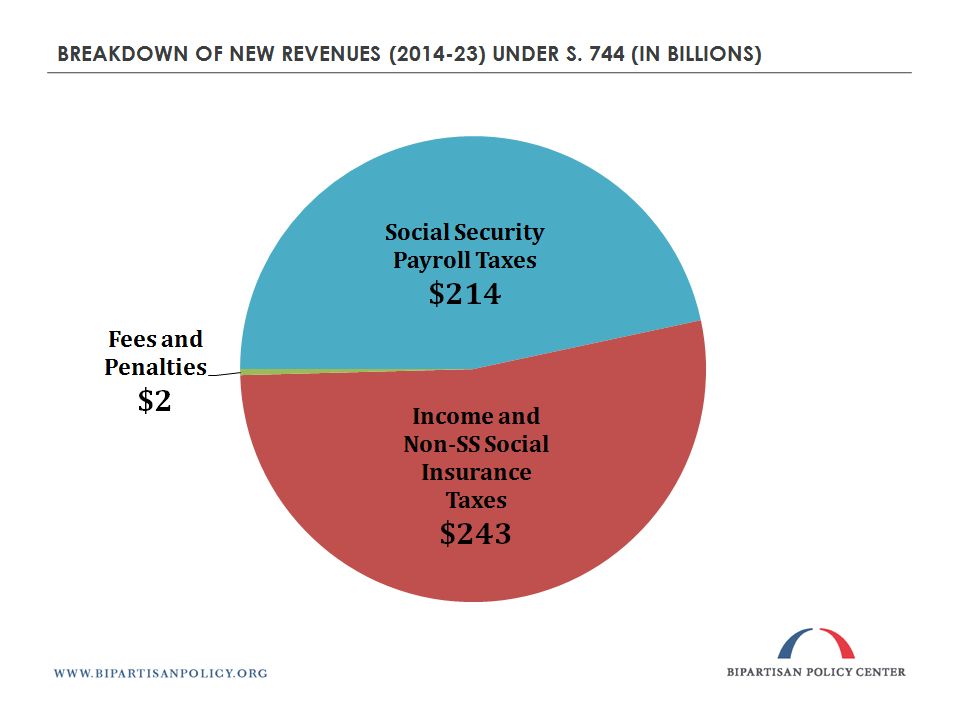 Federal direct spending in the first decade would be affected by increased refundable tax credits, including earned income and child tax credits ($125 billion), as well as various benefit programs to which only some immigrants would be entitled.***** The primary forms of entitlement spending for new legalized residents would be Medicaid and health insurance premium and cost-sharing subsidies created under the Affordable Care Act ($112 billion), but there would be other smaller expenses such as unemployment insurance, Supplemental Security Insurance (SSI), and Social Security.

Finally, discretionary costs initiated by the bill would largely stem from immigration enforcement, including tighter border security, mandatory employment verification, and newly established immigration courts. Under current law, due to the Budget Control Act of 2011’s caps on discretionary spending through FY 2021, much of the increased spending on discretionary programs would reduce funding in other areas. For the subsequent decade (FYs 2024-2033), CBO projects annual increases in spending related to the bill of between 7 and 8 percent, while revenues would grow by 9 percent per year. This results in growing amounts of deficit reduction over time. 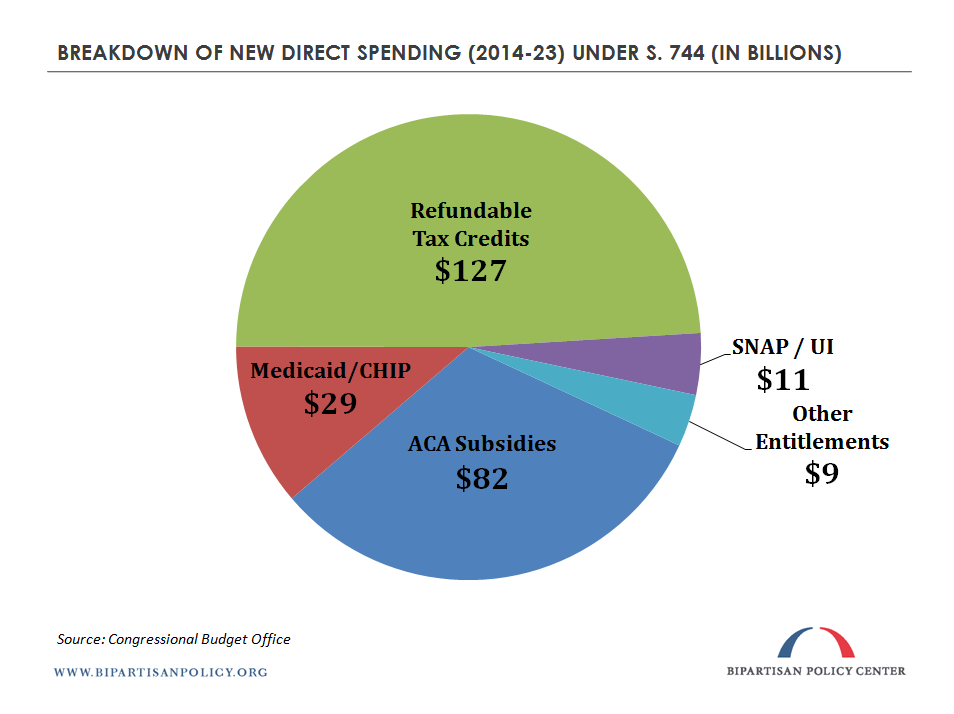 In its report focusing on the Act’s broader economic impacts, CBO underscores the bill’s effects on the labor market, capital investment, interest rates, and total factor productivity. CBO projects that these ramifications, which are not accounted for in the cost estimate, would increase federal deficits by an additional $30 billion in the FY 2014-2018 period, decrease them by $30 billion from FYs 2018-2023, and further decrease them by $300 billion from FYs 2024-2033 ? all of these figures relative to CBO’s cost estimate.

The influx of new workers would significantly affect the labor market. CBO projects that the labor force would grow to 3.5 percent larger than under the current law baseline by 2023, and to 5 percent larger by 2033. Regarding earnings, primarily because (1) many of the immigrant workers made legal by S. 744 would have below-average wages and (2) capital may take time to catch up to the influx of new labor, CBO estimates that average wages for the entire labor force (including the additional people who would become U.S. residents) would be lower than under current law through 2024, but that increases in productivity and the rate of return on capital would drive average wages higher than under current law in subsequent years. Similarly resulting from the lag before capital catches up with the influx of labor, CBO estimates that the unemployment rate would remain approximately 0.1 percentage point higher than it otherwise would be until 2020, but be equal to the baseline thereafter.****** 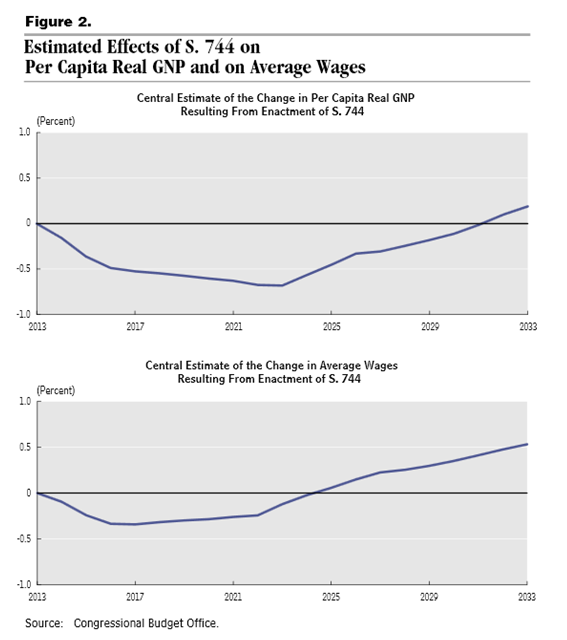 With a larger labor force and higher productivity of both labor and capital (driven in large part by the increase in highly skilled immigrants who tend to generate additional technological advancements), CBO projects that real GDP would be 3.3 percent higher in 2023 than under current law and 5.4 percent higher in 2033. 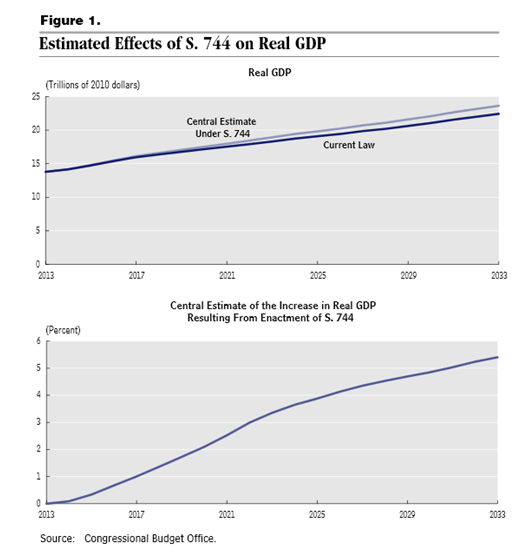 The proposed Border Security, Economic Opportunity, and Immigration Modernization Act would have large implications for the U.S. economy and federal budget. Even though the CBO projections are important guidelines for possible ramifications of the bill, there is inherent uncertainty associated with any economic projections, let alone 20-year projections that involve dramatic changes to fundamental aspects of the economy. Final reforms will likely look somewhat different than S.744, but CBO’s cost estimate demonstrates that comprehensive immigration reform would boost economic growth while reducing federal deficits.

Peter Huff and Holt Dwyer contributed to this post.

* Both the Cost Estimate and Economic Impact reports provide projections based on the legislation as reported to the Senate Judiciary Committee on May 28 along with the amendments made in the star print of June 6.

** CBO: “Specifically, it includes some additional budgetary effects stemming from changes in the productivity of labor and capital, the income earned by capital, the rate of return on capital (and there the interest rates on government debt), and the difference in wages for workers with different skills.”

*** The bill would also require $22 billion in new discretionary costs, but their effect on the debt is not clear because discretionary spending is subject to annual appropriations and the total amount of such funding is currently capped through 2021 by the Budget Control Act of 2011.

**** While these deficit reduction numbers may appear quite high, they represent between 0.1 and 0.2 percent  of GDP during their respective periods.