Our first profile focuses on a bipartisan duo that has been working to move energy efficiency legislation forward in the Senate. Authored by Senator Jeanne Shaheen (D-NH) and Senator Rob Portman (R-OH), S.761, the Energy Savings and Industrial Competitiveness Act of 2013, was designed to increase the use of energy efficient technology across all sectors of our economy, including residential, commercial, and industrial. 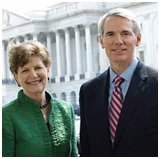 The legislation contains a number of initiatives with substantial benefits for our nation’s economy and environment. Using energy more efficiently ensures that Americans get more for less. In other words, for a given input of energy, consumers receive more services and industry produces more products, which saves money. Many of the provisions in the Energy Savings and Industrial Competitiveness Act of 2013 would reduce costs for businesses and consumers, bolster U.S. competitiveness, and reduce environmental impacts.

S. 761 builds upon the strong historic tradition of bipartisan teamwork on energy efficiency. In fact, Senators Shaheen and Portman have been working on this issue together for several years, having introduced similar legislation on energy efficiency in 2011. While that bill was never considered as a standalone measure in the Senate, several of its provisions were passed in December 2012 as a part of the American Energy Manufacturing Technical Corrections Act of 2012. Many of the remaining provisions, along with some new recommendations, have been incorporated into the current version of S. 761.

Shaheen and Portman’s effort has been supported by a wide range of stakeholders. The BPC’s own bipartisan energy group, the Strategic Energy Policy Initiative, released a comprehensive report in February 2013 that contains many recommendations that overlap with the components of the Energy Savings and Industrial Competitiveness Act of 2013. Additional support has emerged from industry leaders, environmental advocates, labor proponents, energy efficiency supporters, and trade associations, which demonstrates the broad base of support for the both energy efficiency and bipartisanship.

“It’s not often that you get Republicans, Democrats, business, labor and environmental leaders all behind a common goal, but that’s what we’ve done with the push for energy efficiency.” – Sen. Shaheen

The Senators have each enjoyed their experience working with a colleague from across the aisle. According to Sen. Shaheen, “It’s not often that you get Republicans, Democrats, business, labor and environmental leaders all behind a common goal, but that’s what we’ve done with the push for energy efficiency. The support and momentum we’ve seen for this bill demonstrates how great an opportunity we have to pass bipartisan energy efficiency legislation.” Sen. Portman echoed her thoughts, pointing out that “The Energy Savings and Industrial Competitiveness Act I have worked on with Senator Shaheen will make America more energy efficient and increase our industrial competitiveness on the world stage for decades to come, all while driving economic growth and encouraging job creation. Our legislation passed out of the Senate Committee on Energy and Natural Resources with broad, bipartisan support, and we’re encouraging Senate leadership to support a timely Senate floor vote on our legislation.”

The spirit of cooperation displayed by Shaheen and Portman has been rubbing off on their colleagues, as well. The legislation was considered in the Senate Energy and Natural Resources Committee in early May, where it passed by a bipartisan voice vote. The legislation is now awaiting consideration before the full Senate.

This effort demonstrates that bipartisan collaboration remains alive and well in the development and enactment of energy policy. Working together in a bipartisan manner to find ways to save energy and save our country money? Well, that’s a pretty bright idea?


View a larger version of the image below