Updated data on Treasury cash flows through the first week of October show that the range for the Bipartisan Policy Center’s (BPC) X Date ? the date on which the United States will be unable to meet all of its financial obligations in full and on time ? has narrowed to between October 22 and November 1. The updated range is consistent with BPC’s earlier estimate.

No one can predict with absolute certainty the date and time when Treasury will have exhausted all its extraordinary measures and run out of cash on hand. Therefore, policymakers should not assume that they have until October 22 to make decisions concerning the federal debt ceiling. In all likelihood, markets will begin to demand higher interest rates to bid on and hold United States debt. In fact, this behavior is already apparent in short-term Treasury debt interest rates. The U.S. Treasury will roll over at least $302 billion in outstanding federal debt between October 15 and October 31; $120 billion of debt is scheduled to mature on October 17.

Past analysis shows that the debt ceiling confrontation in 2011 cost the American taxpayer $1.3 billion in Fiscal Year 2011 and $18.9 billion over a decade. At least a similar, if not greater, cost could occur in this standoff simply because the total level of debt outstanding and subject to risk is 17 percent greater today than it was in 2011. The longer policymakers allow this debate to continue, the higher we anticipate the costs to taxpayers. 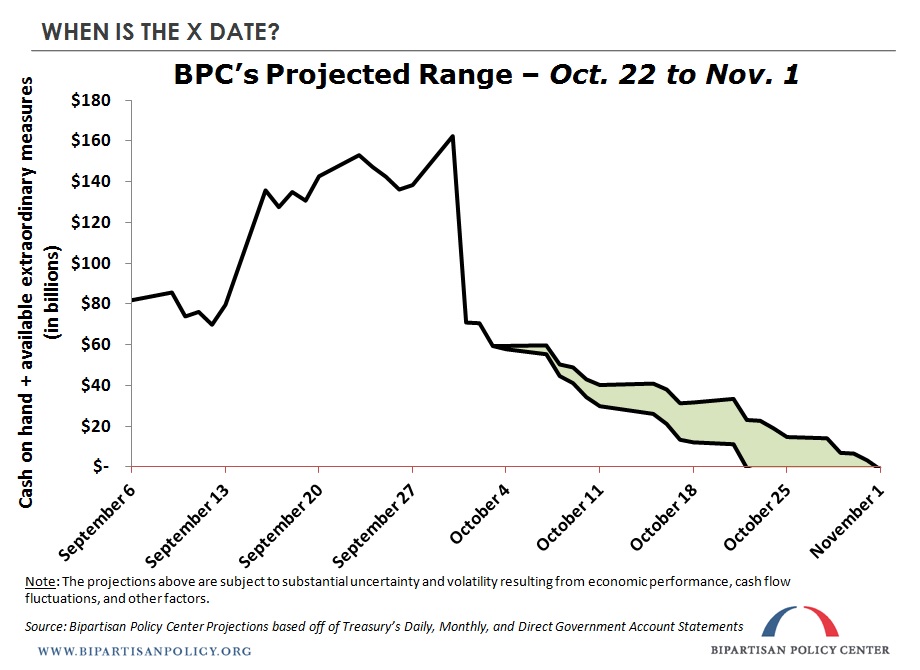 Substantial debt maturing in the second half of October
As of the October 8 publication of this update, Treasury is scheduled to roll-over about $120 billion of maturing securities on October 17, $93 billion on October 24, and $89 billion on October 31. As the X Date approaches without action on the debt limit, one risk is that buyers of government debt will be less likely to participate in Treasury auctions and, for those that continue to participate, more likely to demand higher interest rates, increasing the cost of servicing the existing debt. The amount of debt maturing during this period will increase as Treasury schedules additional short-term auctions in the days ahead. 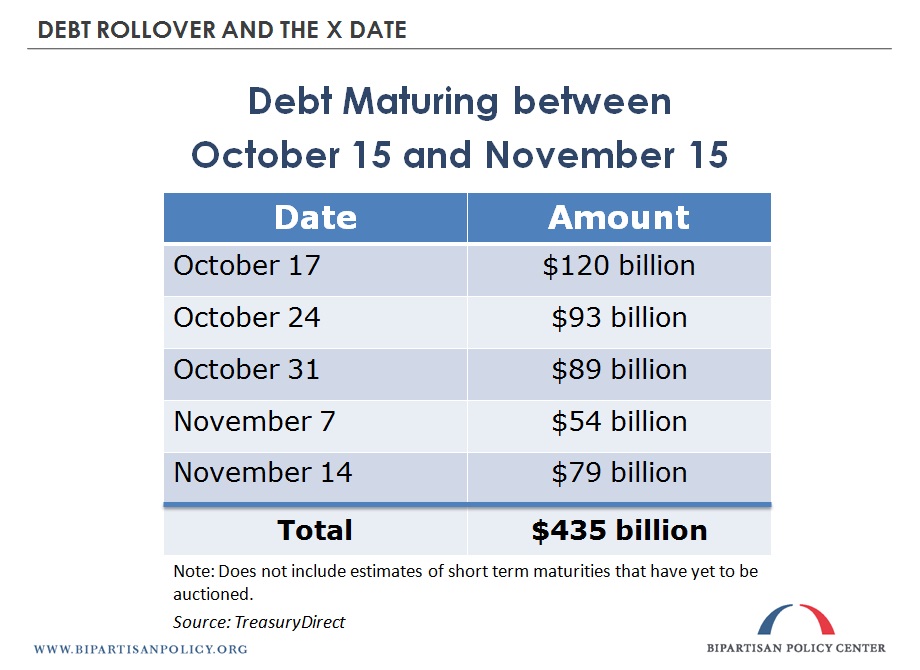 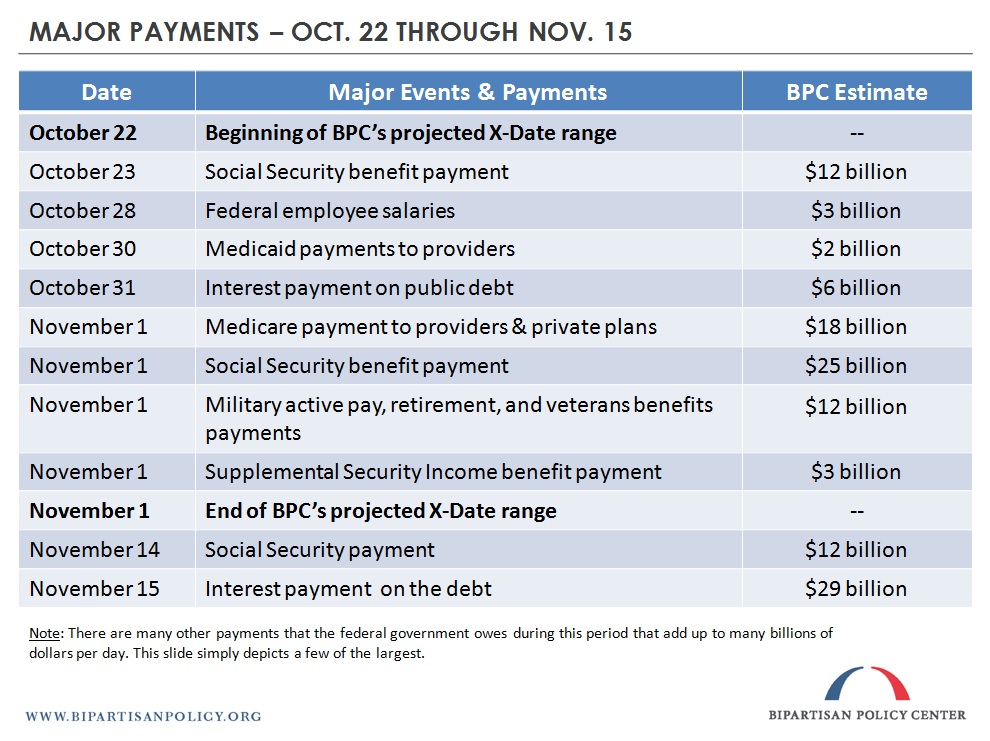 How will the shutdown affect the X Date?
BPC recently analyzed the current shutdown’s effect on government spending based on data from the 1995-6 shutdown. A shutdown that is resolved before policymakers address the debt limit would have very little impact on the timing of the X Date. A shutdown that lasts the entire month, however, could delay the X Date, but probably not by more than a couple of days. BPC will continue to monitor the reduction in spending that occurs due to the shutdown, and if the shutdown persists, will issue an update on its potential impact on the X Date range as soon as the data warrants.

Why no one knows the exact X Date in advance
BPC’s X Date projection has always been and will continue to be a range of dates. While our updated estimate is narrower than our previous one, at no point will it be possible to narrow the projection down to an individual day ? some government transactions, especially revenue, are uncertain in amount and timing. In fact, this statement is true even for the Treasury Department, which has more information about the federal government’s cash flows than any other entity. Despite many reports about an October 17th debt ceiling deadline, October 17th is not the X Date. It is the date on which Treasury Secretary Jack Lew estimates that the federal government will have exhausted extraordinary measures and only have $30 billion cash on hand to pay bills.

While there are clear patterns (e.g., Mondays and Wednesdays typically have higher revenue than Tuesdays and Thursdays), the exact amount of collections for each day is not known in advance and can vary by several billion dollars. For example, in October of last year, about $3 billion in revenue was collected on one Tuesday, just over $6 billion was received on another Tuesday, and almost $11 billion arrived on yet another Tuesday. Furthermore, while spending is subject to less uncertainty than revenue, it still varies. For example, on some days, Medicare spending can exceed $2.5 billion while on other days, it is closer to $1 billion. These amounts are determined by how many and what types of claims are processed, which cannot be known in advance. Our ability to project the X Date will always be limited by random variation in these transactions.