Pamela Hughes Patenaude, director of the Bipartisan Policy Center (BPC) Housing Commission, was recently named as a Woman of Influence in HousingWire Magazine. This esteemed group of women was chosen because of their contributions to the U.S. housing economy.

Pam brings more than twenty-five years experience in the field to her role at BPC and has led our Housing Commission since it was launched in October 2011. The BPC Housing Commission, a group of 21 former elected and appointed officials, and industry and business leaders in the housing sector, spent 16 months crafting a set of recommendations to reshape federal housing policies. 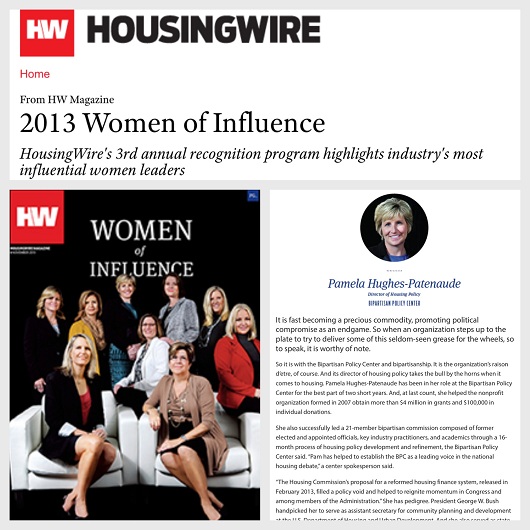 The commission’s report, Housing America’s Future: New Directions for National Policy, was released in February and has received praise from the administration and from members of Congress, in the media and many in the housing industry.

“This year’s honorees represent a very special group of women. We focused more than any other year on women whose efforts have driven measurable and positive results for their companies, and the industry in general,” said Paul Jackson, CEO and Published of HousingWire.