“It’s so very different from how we used to do things. Bob Dole and George Mitchell used to have dinner together once a week to talk about doing business together. It’s what was done.”


“But insiders think there’s a chance the ground could shift. Were Republicans, citing deficit reduction, to produce a modest $20-a-ton carbon tax ? an idea being pushed by right and left-wing D.C. think tanks ? Obama would likely embrace it. “If it happens, it will be driven by budget, not environmental, concerns,” says Jason Grumet, head of the Bipartisan Policy Center. But the cost of such a deal could be high: In exchange for a carbon tax, Republicans would likely demand an end to EPA oversight on carbon pollution from power plants.”

“We’re the reserve currency of the entire world,” said Steve Bell of the Bipartisan Policy Center. “There’s trillions of dollars of our debt sliced and diced into all sorts of financial instruments around the world. If you’re a 28-year-old bond trader for Nomura in Tokyo, and someone says, ?Hey, we just heard a rumor Treasury isn’t making all its payments,’ what do you do? You panic and you sell.”

“The biggest lesson I can impart to current legislators is that the complex and multifaceted issues of crime and firearms require us to move forward vigorously but also thoughtfully, with inclusivity and respect for all the stakeholders. I hope that the current desire for action as a result of the tragedy at Sandy Hook does not dissipate with time or as a result of the complexity of the issue.”

“We call it the drop dead date. The date, in which all of these extraordinary measures most of which are borrowing from government accounts, expire. That means at that time the treasury will not have enough money to pay the next bill that comes in, for a long time.”

Damian Paletta and Jon Hilsenrath in The Wall Street Journal (Page A1):

”Administration officials are working on updated estimates of when the Treasury will run short of cash and could release those projections in coming days. According to the Bipartisan Policy Center, a Washington think tank, the Treasury will hit that point between Feb. 15 and March 1 unless the debt ceiling is raised.”

“Jason Grumet says his group, which was founded in 2007 by four former Senate majority leaders, Republicans Bob Dole of Kansas and Howard H. Baker Jr. of Tennessee and Democrats George Mitchell of Maine and Tom Daschle of South Dakota, continues to fight against the trend toward increased polarization. He blames all the animosity in Washington on the decline in interpersonal relationships on Capitol Hill, even as he acknowledges other factors such as increased partisanship among a citizenry divided by region, partisan redistricting in the House and primary challenges to incumbent lawmakers.”

“If we pay the Chinese the interest we owe them on their sovereign debt holdings, on time and in full, but we don’t pay Social Security recipients or armed services personnel their salaries, is that a default? Well, of course it is.”

Thomas Kean and Lee Hamilton in The Hill:

“Keeping our country safe is the government’s first responsibility. In a time of economic austerity, hard decisions and trade-offs are needed. Even if prolonged periods pass when we haven’t suffered an attack, the public must avoid complacency. Our strongest asset in strengthening our security is an informed and active public that continuously demands action by the government.” 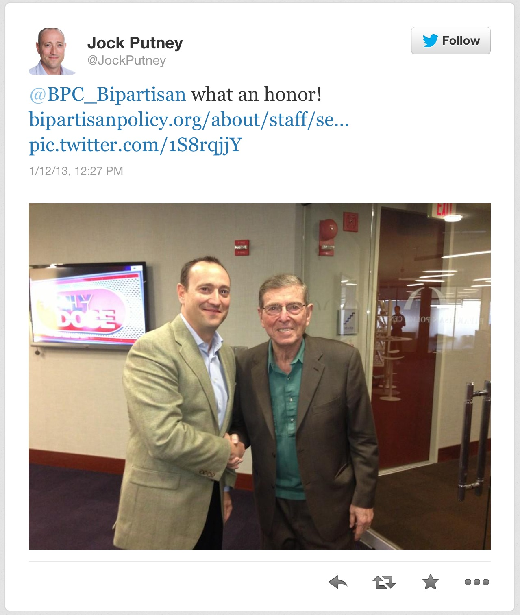 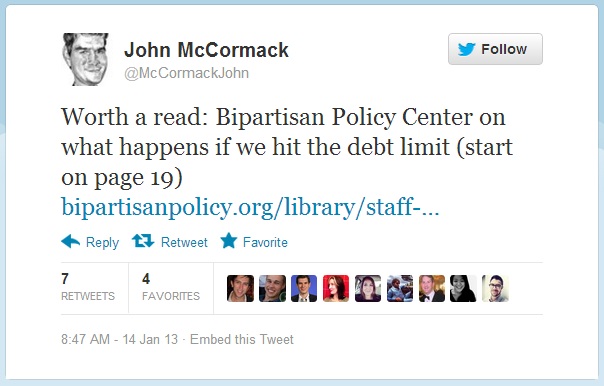 598
In case you missed it, here’s what they’ve been saying about BPC this week